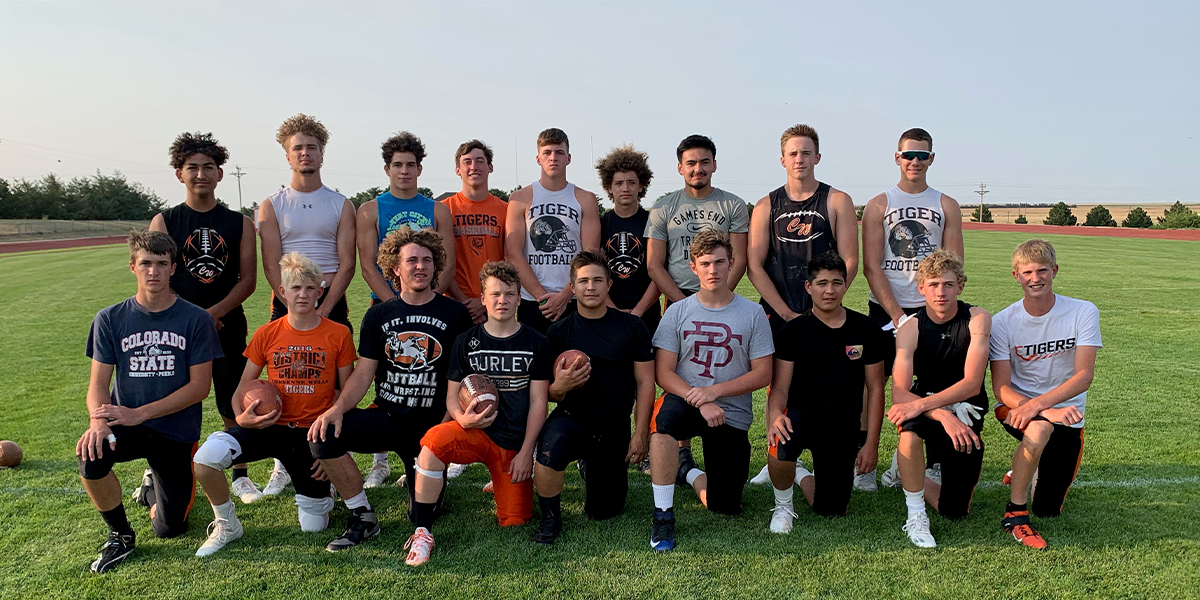 CHEYENNE WELLS TIGERS ARE LOADED AND READY FOR A TOUGH LEAGUE

In order to win a state championship a team has to have great athletes, a will to win, an exceptional work ethic---and just a little bit of luck.  That last piece was the part third-year head coach Myles Smith and his Cheyenne Wells Tigers couldn’t quite piece together last year as the farthest they could advance was to the state semifinals where they lacked three of their key players, Evan Worley, Cade Mitchek and Rogelio Rangel who were out for various reasons.  They would lose that game and their perfect season in a 36-15 loss to the eventual state runner-ups Stratton-Liberty.

The Tigers got as far as they did by utilizing a large group of talented underclassmen and two seniors in Drew Scheimer and Preston Hernandez.  Hernandez was a particularly tough offensive player with 343 passing and 214 receiving yards.  He played both sides of the ball joining Scheimer in a strong defense.

According to Smith, “We expect some big things from this year’s team.  We have 8 upperclassmen on the team with a lot of experience.  They are looking to take the next step this season after losing in the semifinals the last 2 years.”

Smith goes on, “I look to all of our upper classmen to make some big strides this season, especially seniors Evan Worley, Rogelio Rangel and Cade Mitchek.  After having to sit out the playoffs last season.”

Mitchek is the reigning 200M state track champion who missed the season to injury. He should be a daunting offensive weapon.

Smith knows there is plenty of room for the team to improve in order to be ready for the playoffs.  “I feel like there is plenty of room for improvement in all three phases of our game.  We need to do a lot of the little things better this year.  Our biggest strength will be, I think, the experience some of our key role players gained down the stretch last season when we unfortunately had guys out for various reasons.  Even though it was devastating to see guys out in the playoffs it will benefit us moving forward this season.”

The Tigers should get some good support from seniors Dillon Ball who had 280 yards in pass reception a year ago and 56 tackles on defense and Kody Ryser who has talent on both sides of the ball.  Also, juniors Sullivan LeFlore, Blake Gilmore and Ty Scheler.  Gilmore passed for 387 yards a year ago and generated 431 of total yards, and Scheler carried for 150 yards and had 93 yards in pass reception.  Scheler also added an impressive 66 tackles on defense.

Other players that Smith will look at are sophomores Carson Noe, Jesse Harlow, Jonathon Reyna, and Perry Chadwick.  Then Smith has a slew of freshmen who will be busy learning the system including Ethon Garay, Taegen Eiring, Bryson Hyle, Gabriel Zamarripa, Zach Dickey and Chason Turner.

If the Tigers get through the extremely tough South East 6-Man League, they should be contenders in the playoffs.  Smith knows it won’t be easy, “We are going to have a solid league again this year, I know Granada is going to be really tough again this year.  Eads and Kit Carson made the playoffs and are returning a lot of talent. Cheraw, who I thought should have made the playoffs last year, has a lot of explosive players coming back.”

The Tigers will start the season at home on Friday, August 27 hosting a non-conference game with Hi-Plains.  Then every game in September is a challenge as they face off with Stratton-Liberty, Kit Carson and then Granada in consecutive order.

But Smith and his Tigers are ready, “Should be an exciting year, can’t wait to get the season started!”