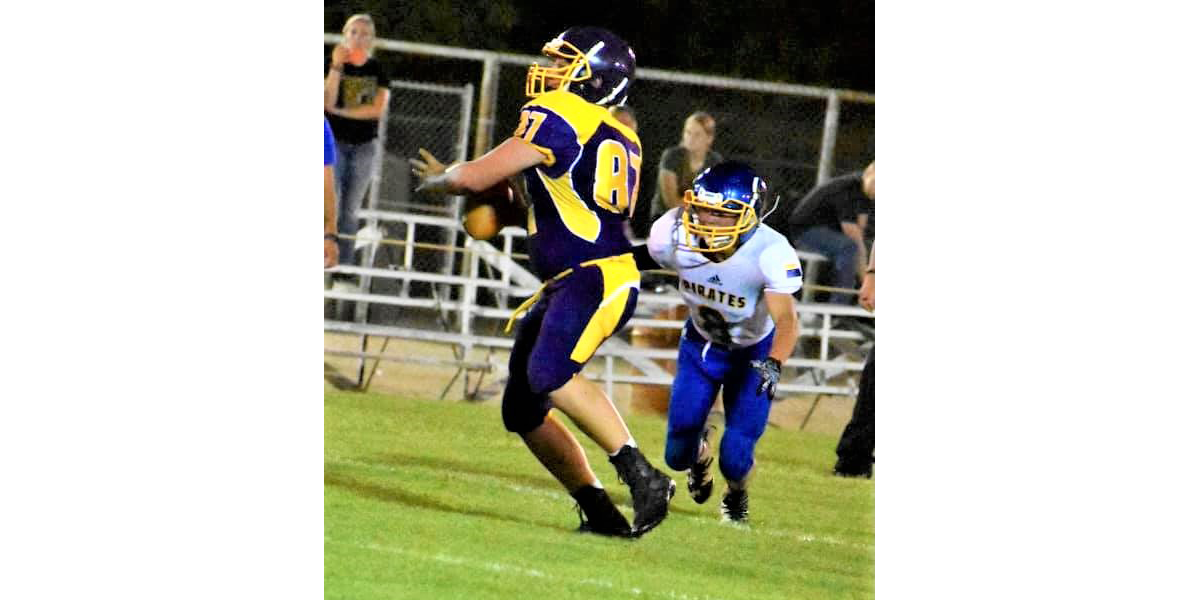 PIRATE SPEED CATCHES UP WITH EADS IN SEASON OPENER LOSS, 50-39

It was a great game.  The Eads Eagles hosted the Hugo Pirates in the season opener for both teams and the crowd at the Eads field got their money’s worth as the game turned into a footrace with two players from Hugo, seniors Colby Simmons and Wyatt Miller, finally ran the Eagles to ground, 50-39.

Coach Trey Eder said after the game, “It was a fun game to be a part of even though we came out on the short end of the stick.  We went back and forth through the entire game.  It made it exciting and competitive.”

Eads was without a key player, sophomore Porter Spady who was sidelined with an appendix surgery a couple of weeks ago.  As a freshman Spady was a strong complement to senior Damien Barnes who was an all-state player for Eads.  And as a freshman, Spady lit up the scoreboard by being the second highest scorer both from the air and on the ground with 845 all-purpose yards and 55 tackles.

Nevertheless, it looked like Eads would dominate the Pirates as in the first quarter the Eads group went off on two pass plays for touchdowns that looked easy.  With 4:49 left in the opening quarter Eads sophomore quarterback Bo Arnold found senior Donte Sierra on a roll out to the right side for the first score of the game on an 18-yard touchdown pass play.  Then two possessions later, the Eagles scored on the exact same play from 15 yards out.

Unfortunately, for Eads, Spady is also their kicker, so the Eagles had to resort to going for the one-point conversion play each time.  They got the first one but missed the second one.

Simmons came roaring back and scored on a 15-yard touchdown scamper after producing big yardage on the march down the field.  Simmons is also the kicker and would hit every two-point conversion kick he had.

Towards the end of the first period, it would be a dangerous combination of Simmons and Miller hooking up in an impressive 20-yard TD pass play with Simmons hitting the extra kick and leaving the first quarter score at 16-13 with the Pirates having the lead solely due to the existence of a kicking game.

The passing game for Eads continued to produce for them into the second quarter.  Arnold showed he has a strong arm at the 7:49 mark when he hooked up with sophomore Keenan Smith in a 34-point touchdown pass play.  Cade McDowell powered the ball in for the extra point getting the Eagles the lead back, 20-16.

Simmons answered with a 51-yard touchdown pass to his favorite receiver Miller.  Then hit the two-point kick to take the lead back making the score, 24-20.

The backbreaker of the game came with 2:49 left in the first half when Simmons connected with Miller once again for 10-yard touchdown pass play.  With a botched kick snap, Simmons still managed to hit Miller in the end zone for one more point leaving the score at 31-20 --- a deficit too much to overcome.

Eads battled back and with .46 second left in the first half and Eads facing a 4th down situation, Arnold found McDowell for a 25-yard gain and a first down.  After a quick time out, the Eagles had a chance on the 1-yard line to punch it in, but a pass play fell incomplete leaving Hugo with an 11-point halftime lead.  It was a huge backbreaker.

Both teams came back into the game and for the entire third quarter it was the defense that did the job.  Neither team could get the advantage until late in the quarter when Hugo worked their way to the 1-yard line.  But an impressive goal line stand by Eads stopped the Pirates and kept the Eagles as contenders.  In that stand Sierra, then Smith, then McDowell and finally Sierra made the plays keeping the Pirates out of the endzone.

Eads then challenged the Pirates scoring early in the fourth quarter at the 9:49 mark on the pass play they had been successful early on in the game.  It would be Arnold to Sierra for a 40-yard gain that set up an Arnold to Smith 30-yard advance down to the 10-yard line.  McDowell punched it in from there and Eads was close, but still trailing, 31-26.

On the next possession Miller scored on a 6-yard scramble after the Eads defense missed two tackles on the play.  Simmons had gone out of the game with a leg injury a few plays before taking away Hugo’s ability to score on the kick conversion and leaving the scoreboard at 37-26.

Eads answered with just 3:23 left in the contest on a Ty Wilson 9-yard run for a touchdown.

But at the 2:15 mark Hugo answered on an 85-yard pass play from Miller to junior Jack Kissel.  After a one-point conversion the score was 44-32.

At the 1:33 mark Eads fumbled the ball and Miller picked it up as it bounced around and ran it into the house for a 50-32 lead.

The JV groups from both teams then came into the game.  One last statement came from Eads freshman Kaden Dunlap with .11 seconds left as he broke through the middle and ran the ball for his first preps touchdown.  It was an exciting 50-yard touchdown run.  Brenden Reifschneider then punched in the extra point conversion leaving the final tally at 50-39.

Eder was very pleased how his players responded to being thrown into new roles after Spady was out, “I was happy how the kids responded as we had to put a number of young kids in new positions making us very inexperienced.  AJ Vasquez was new at the center, and we also had new ends in Smith, who had never played before this season, and Mitchek, who knows our system but is a freshman.  Wilson and Sierra had never played in those positions, as well.  Arnold was new at the quarterback spot having played just a few possessions at the QB as a freshman.  Then the biggest change was we moved Cade McDowell to a guard position in a position the senior has never played.  We needed him as a blocker, and he stepped up huge in there.”

In looking at the stats the Eagles out-performed Hugo in every category having 420 yards in total yards compared to 306 for the Pirates.  Eads out-ran them, out-threw them and had possession of the ball twice as long.  But it would be the mistakes on defense that cost the Eagles the game, and numerous missed tackles at key moments were the difference.

Arnold had a strong varsity outing throwing for 171 yards in the air.  Wilson was the workhorse for Eads as the senior carried 30 times for 137 yards.  Dunlap had 50 rushing yards and Sierra added 35 yards on the ground.  Arnold found a number of different receivers with Sierra leading the way with 4 receptions for 91 yards and 2 touchdowns.  Smith added 3 receptions for 64 yards and 1 touchdown.  AJ Vasquez, Eagle center, caught one long pass for 22 yards.

Eder summarized where the team’s focus will be, “We are concentrating on becoming a dual threat team and that’s what we’ve been trying to focus on early.  Arnold really stepped up and made a statement from the air and that air game is what we’ve been lacking.

Next week the Eagles will still be without Spady’s services as they get on the road and take on the preseason-favorite Granada Bobcats.  Granada had a scrimmage with Wiley over the past weekend when both opponents were quarantined due to COVID restrictions.  This conference game is slated for Friday, September 3 at 7pm.