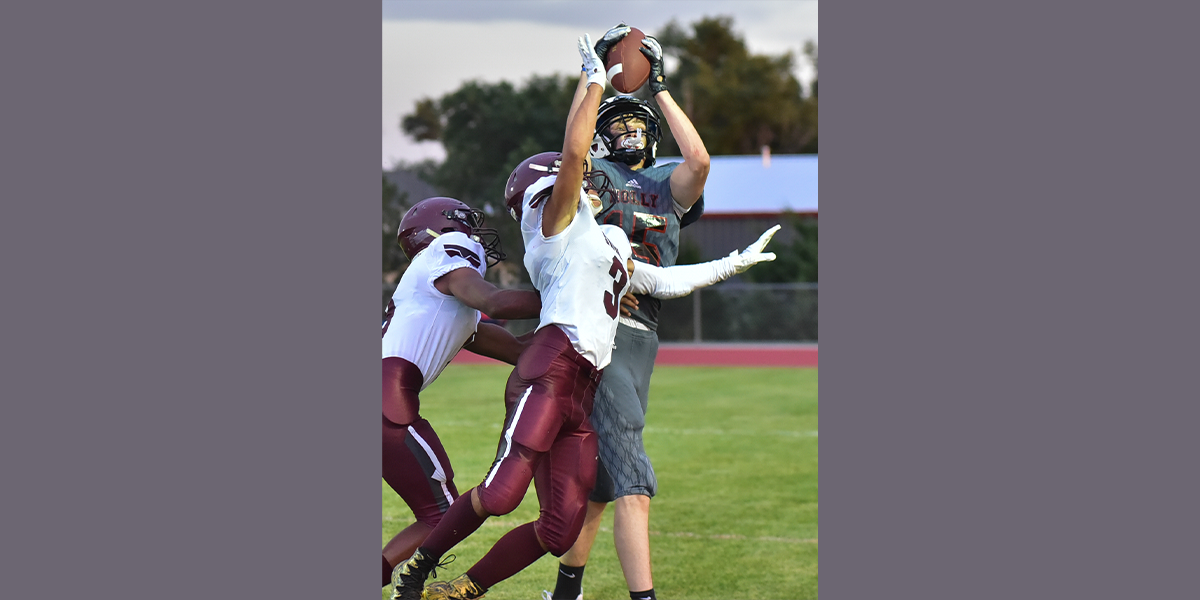 The No. 6 state-ranked Holly Wildcats were expecting a good game against the Swink Lions in a Class A 8-man season opener for both teams on a perfect Friday night for football on Aug. 27 in Holly.

Swink made it a game in the second half before the Wildcats won 42-28.

“I felt really good about the win,” said Holly head coach Dayne Eaton. “Swink is a big physical team and we adjusted to their pounding running game in the fourth quarter.”

Holly jumped out to a 28-6 lead at halftime on the strength of an offense that was clicking behind senior quarterback Dakota Eaton.

Eaton along with running backs Eli Rams and Donovan Pecina all had over 100 yards rushing.

“We had three guys run for over 100 yards and that is a rarity for our spread it out style of play,” lauded Coach Eaton.

Holly also had some success with the passing game.

In the second half, Swink hit its stride on offense and got within a touchdown on two occasions before Holly would answer with a score early in the fourth quarter that eventually sealed the deal.

After a slow start offensively, the Wildcats started to get things rolling.

Holly scored on its third possession of the first quarter.

From the Swink 45, Eaton engineered a seven-play scoring drive that was capped on a 1-yard run by Andre Salgado with 1:03 showing in the opening quarter. Eaton ran for a two-point conversion after a fake kick to make it 8-0.

A key play in the drive came on 1st-and-10 on the Swink 36 when Eaton connected with Salgado on a 32-yard pass to the Lions’ 4-yard line. The Wildcats scored three plays later.

After a Swink punt early in the second quarter, Holly struck again.

From the Holly 45, the Wildcats scored quickly in two plays.

Pecina busted a nifty 55-yard scamper and outran two Swink defenders into the endzone. A pass was incomplete on the PAT as the score stood 14-0 with 11:15 showing.

After an exchange of possessions, Swink found the endzone on a 20-yard TD strike from QB Hunter Bauserman to Ben Miner. A run on the extra point failed with the score 14-6 with four minutes left in the first half.

On the third play of the drive, the Wildcats faced 3rd-and-5 from the Holly 45 when Eaton was back to pass and forced to run. He broke three tackles and rushed 58-yards to the Swink 8-yard line.

Two plays later, Eaton hooked up with Fernando Dominguez on a 5-yard TD strike. A two-point conversion run by Ramos gave the Wildcats a 22-6 lead with 3:24 on the clock.

Following another Swink punt deep in its own territory, Holly took over on the Lions’ 35.

The Wildcats scored again on a four-play drive.

On the next play, Eaton gained 13 yards to the Lions’ 11-yard line.

Holly was whistled for a holding penalty on the next play to push them back 10-yards.

Facing 1st-and-20 at the 21, Eaton completed a nice pass into the outstretched arms of Colby Swopes, who made the catch between two defenders in the endzone with 38 seconds left. The PAT failed and Holly took a 22-point lead into the locker room.

In the second half, Swink made some adjustments and found some success with the ground game.

The Lions wound score twice while Holly scored just once in the third quarter.

Swink received the second half kickoff and scored in nine plays. The drive was capped on a 17-yard run by Garlon Guerin. A pass was good on the extra point to bring the score to 28-12 with 8:24 on the clock.

Holly then turned the ball over on a fumble at midfield.

Swink was able to capitalize and tallied in seven plays on a 1-yard QB sneak by Bauserman. The extra point was good on a run by Bauserman as the Lions trailed by just 28-22 with 3:48 remaining in the third.

Holly was able to counter with a 70-yard scoring drive.

On the first play, Eaton broke a 34-yard run to the Swink 36. Six plays later, Ramos scored on a 5-yard run. The extra point failed but the Wildcats gained a little breathing room with a 34-22 lead with 1:46 left in the third quarter.

In the fourth quarter, both teams would score one TD apiece.

Swink answered Holly’s score with a 19-yard TD strike from Bauserman to Miner. The extra point failed on a run but the Lions trailed by just six points, 34-28, with 10:40 left to play.

On the ensuing kickoff, Dominguez had a good return and a penalty for a horse collar tackle on the play gave the Wildcats good field position on the Swink 49.

Holly went to work and struck paydirt in six plays. After an incomplete pass on first down, the Wildcats stayed on the ground.

The drive was capped on a 5-yard run by Ramos. On the extra point, Eaton scrambled and found Dominguez for a two-point conversion to make it 42-28 with 8:09 on the clock.

Holly’s defense then went to work.

After the ensuing kickoff, Swink took over on its own 30.

Eight players later, the Lions faced 4th-and-5 at the Holly 43.

The Wildcats came up with a big stop when Bauserman was greeted by a host of defenders and came up 1 -yard short for a first down.

Holly took over on the Swink 47 with under four minutes remaining.

After an incomplete pass on fourth down, the Wildcats turned the ball back over to Swink.

With 2:44 left in the game, Swink took over on its own 45. The Lions faced 3rd-and-9 when Bauserman went back to pass and was sacked on a big defensive play by Cael Nordyke.

On fourth down, a long pass by Bauserman fell incomplete.

Holly took over with 1:36 to go and ran out the clock for the victory.

“It was a good win and a nice way to start the regular season,” said QB Dakota Eaton after the game. “We made some mistakes, and we have to correct those. Swink is a good team, and they did a good job of containing me at times. But our offensive line did a great job. I feel we can run the ball on any team and won’t have to rely so much on our passing game.”

On defense, Pecina paved the way with 11 tackles. Ramos followed with 9 tackles, Andre Salgado and Daunte Maldonado both stepped up with 7 tackles each, Gabe Neugebauer 6, and Swopes with 5 tackles.

Ramos and Swopes both had 2 sacks and Huston Rushton had a fumble recovery.

“I think the biggest improvement was our defense,” said Eaton. “We would bend but not break with our run defense. We still need to work on our pass coverage and had some breakdowns that led to Swink touchdowns. But for the most part, I liked what I saw.”

Eaton added, “Our depth was the difference in the game. We played a lot of different guys and I was really happy with the effort.”

Holly will host the Akron Rams this Friday, Sept. 3 at 7 o’clock.

“We have a huge test ahead of us against Akron who scored 50 points on Byers,” said Eaton.