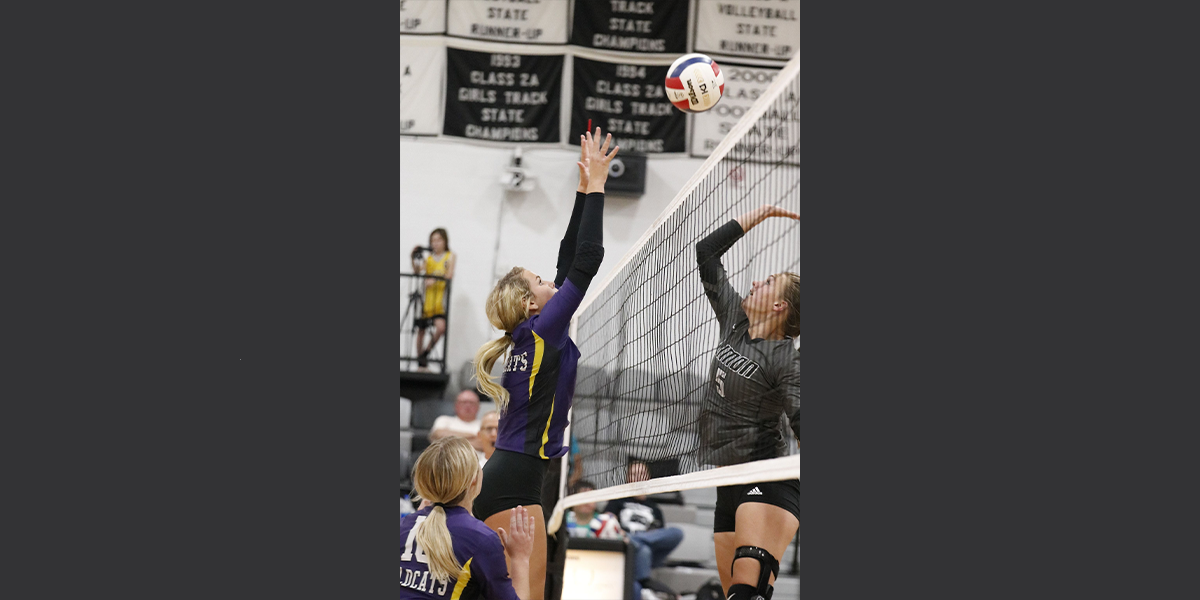 The Hi-Plains Volleyball League was at full speed over the past weekend as numerous area teams played multiple contests.

The Eads Eagles Volleyball program continued to skid as they lost two more contests over the weekend leaving their overall record at 1-5 and league record sitting at 0-2.

The Eads Lady Eagles continue to play decent volleyball but struggled to get the points on the board losing both contests over the weekend, 3-1 in both, to Granada and Kim-Branson.  They, unfortunately, were without the services of their front row starting middle hitter in Maggie Haase who was injured early in the Granada contest.

Head Coach Chelsea Davis said, “Due to illness and injuries, we had to make some unpredicted adjustments.  Maggie went down in the first set at Ganada and after an X-ray it shows the ankle is sprained.  We are hoping she heals properly and smoothly as we definitely miss her at the net.”

Eads already had a starter out at Granada as outside hitter Lisi Buller was sick and the Eads coaches had to replace her with freshman Aless Paez.  Once Haase was hurt they then had to move outside hitter Brianne Habinck to Hasse’s spot in the middle, Paez to Habinck’s right hitter position and Buller had to play despite not feeling well.  The also used freshman Kathryn Trosper in spots during those early rotations.  It took them two full games to get back in rhythm finally winning the third set.

Davis added, “The position shifts proved to mess with our mindset as we couldn’t perform many of our basic skills.  We struggled passing, communicating and serving.  There were some things that looked good in spots but overall we have not been able to play like we did at the Springfield match in our season opener.”

Still missing their middle hitter in Haase, it took the Eads girls time to get into the groove of the game as they managed to win the third set in Kim.

Hopefully, Eads will get Haase back on the court in the near future.  This week is Fair week in Kiowa County, but the volleyball team will still be very busy with preparing for an out-of-state match in Tribune, KS.

Davis added, “Next Friday we travel to Tribune which is always hard during Fair week.  It will be nice to play a team, though, that we know nothing about and have never seen before.”

Head Wildcat coach Jasmine Jacobs commented, “We battled hard against Limon taking them to five sets. We hit a rough patch in the fourth game that trailed into the 5th game. The girls did a great job adjusting to their big hitters and placing the ball on their side of the court. Our serves really kept us competitive. Our passes and blocks weren’t as consistent as I would like. With that struggle we weren’t able to run the quicker offense we are aiming for.”

No stats were available for the Limon game.

The Hugo group has a collection of very solid players and the contest with the Wildcats was exciting as both teams pounded away at each other.  The Hugo group proved to be just a bit stronger as they had 45 kills, 13 ace serves and 93 digs as a team.  The Wildcats managed 35 kills among their hitters and nailed 9 ace serves.

The Cats came out swinging and Hugo was slow to start losing the first set by two points.  But the Lady Pirates came back strong and grabbed the next three games in very close scores.

Hugo senior Glorya Carr pounded down 17 kills and had 3 ace serves and 25 digs.  Junior Baylee Kelly add 13 kills for the Lady Pirates.  Jayli Lockhart continued to be a serious threat from the service line as the freshman had 7 ace serves.

For the Cats it would be Kenzie Waggoner who continues to play at a high level with 17 kills, 2 blocks and 30 digs to her credit.  Tess Johnson had 8 kills from the middle and added 2 blocks.  Sophomore Lindsey Mayhan had 3 ace serves, 15 digs and 7 assists.  Torrie Randel led the team in assists with 15.

The Lady Cats are about to get extremely busy and need to find a way to string a number of wins together.  They face off with Springfield at home on Thursday, September 9.  On Friday Cheyenne Wells comes to town for the Cheyenne County Showdown, and then the Cats welcome another conference contest with McClave on Tuesday, September 14.

The Cheyenne Wells girls are an athletic group and as such have chalked up a nice start.  Coach Sarah Hyle has them playing aggressively and focusing on keeping their momentum high.  They have accumulated a 3-1 record thus far on the season as they struggled against a solid Stratton/Liberty team and got their first loss of the season on Saturday.

On Thursday the Lady Tigers played South Baca and easily defeated them in three straight sets in scores of 25-13, 25-22 and 25-8.

Coach Hyle was pleased with her team’s performance, “Thursday against South Baca our girls came back from a 17-9 deficit in the second set to win the set.  We were led by our senior Erin Minton who had 10 kills, 2 blocks and 8 digs.  In the third set Minton served 14 points in a row.”

Hyle saw some good things against the Patriots, “In the South Baca game the girls showed grit and determination.  I couldn’t have been more pleased with their perseverance.”

However, the Tigers hit a buzz saw in a very scrappy Stratton team who now enjoys the strong play of sophomore Sedonia Isenbart after she played her freshman campaign in Kit Carson.  In the Stratton game the Tigers were out-gunned completely losing in three straight sets in scores of 9-25, 14-25 and 11-25.

Hyle stated, “We struggled on Saturday at Stratton.  Two of our players were gone for the weekend so we were short-handedm and we couldn’t get anything going either offensively or defensively.  We couldn’t overcome some hitting and digging errors we normally don’t commit.  It was a tough loss.  As always, Stratton was a solid team.”

In that contest it would be senior Sydney Dickey who carried the load with 7 kills, 2 blocked balls and 9 digs.  Eiring continued to play strong for the Tigers adding 2 ace serves and 10 assists, while Minton added 2 blocks and 11 digs in the contest.

The Lady Tigers will be busy in the week ahead starting with a trip down the road to neighbor Kit Carson on Friday night for a showdown in Cheyenne County.  The CW group will then hit the road again and travel to the Bethune Tournament on Saturday.  They’ll have one more contest and one more road trip on Tuesday, September 14 as they travel to Idalia.