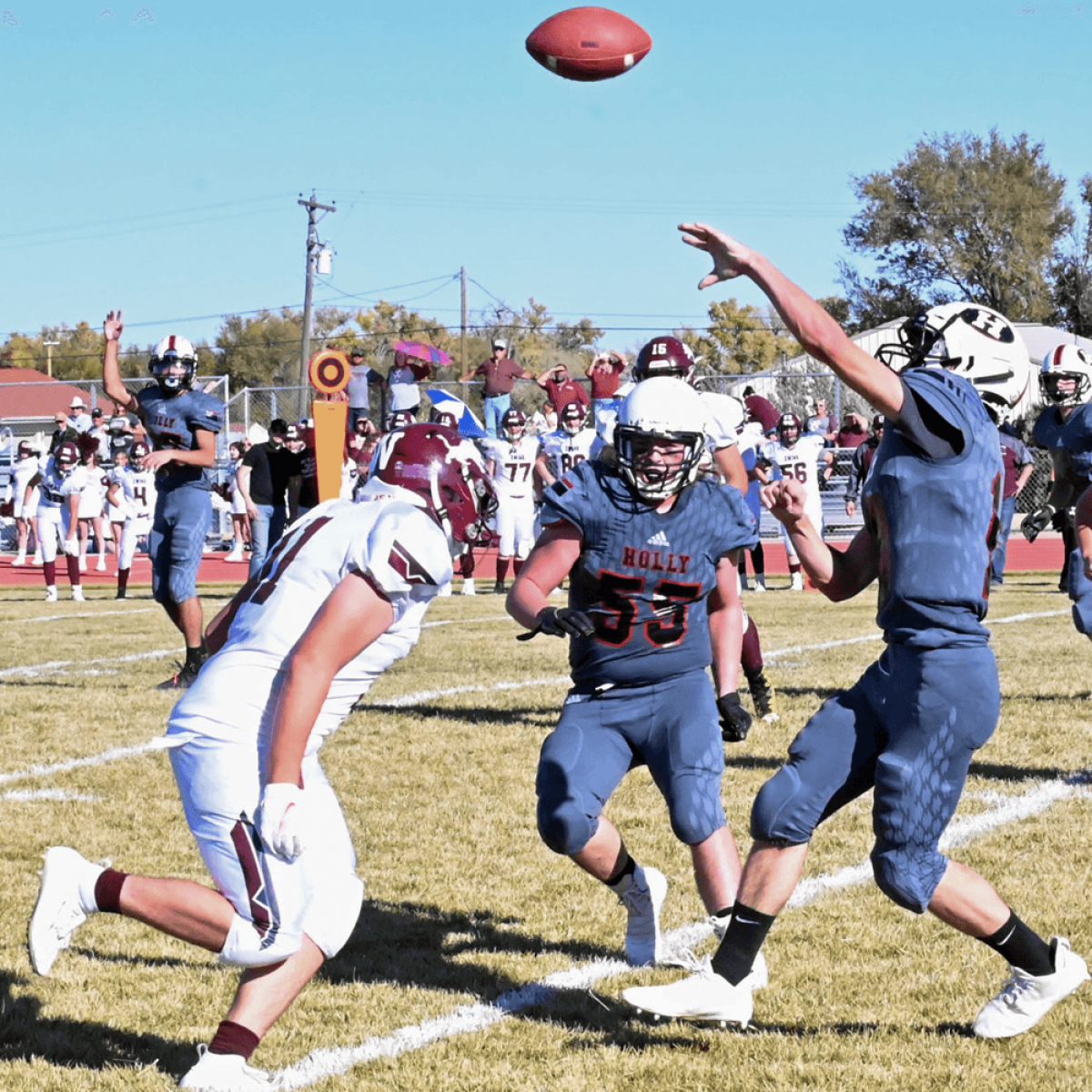 Holly quarterback Dakota Eaton fires a pass while Swink’s Trevin Holland moves in to apply a hit. Eaton took a hard shot on the play but proved his toughness. The Wildcats won a hard fought battle with the Lions, 37-20, in a first-round game of the 8-man state playoffs on Saturday, Nov. 6.

Holly Defeats Swink, 37-20, in First Round; Wildcats to Host Dove Creek in Quarterfinals

In the first-round of the Class 1A 8-man state football playoffs, the Swink Lions made the trip to Holly to face the Wildcats.

On a perfect afternoon for football, it was a game filled with mistakes and turnovers, but in the end one team would take control and move on.

With little action in the first quarter, Holly marched to the Swink 13 yard-line, but fumbled it with 1:33 remaining to end the threat.

Holly drew first blood with 9:52 left in the second quarter.

On first down and goal on the Swink 10 yard-line, Donovan Pecina pounded the ball up the middle for a seven-yard gain.

On the next play, quarterback Dakota Eaton kept the ball around the left end and broke through two defenders to extend the ball over the goal line for the Wildcats’ first touchdown. The extra point failed on a fake kick and an incomplete pass and left Holly with a 6-0 lead.

Strong defensive pressure by Holly forced a grounding call on the quarterback in the end zone.

This gave Holly a safety and an 8-0 lead with 8:16 left in the second quarter.

The next big scoring play came on Holly’s next possession following the punt after the safety.

Swink answered with a 94-yard kickoff return by Ben Miner. A pass attempt on the extra point was knocked down by Colby Swopes with the score 15-6 with 6:25 remaining in the second quarter.

The Lions would score again after a long pass play from quarterback Hunter Bauserman to Miner set them up in the red zone. Garlon Guerin gained a quick nine yards, and Bauserman scored on a quarterback sneak from one yard out with 4:31 on the clock in the first half. The extra point was successful and the score was 15-13 in favor of Holly at halftime.

On the play, Eaton connected with Pecina on a flare pass out to the left. With a handful of moves, Pecina could not be caught as he made a spectacular run down the left sideline for a touchdown. The extra point kick from Josue Avalos made it 22-13 for the Wildcats.

Swink drove down the field but Andre Salgado picked off a pass attempt at the goal line to end the drive.

The Lions were undeterred again and drove into Holly territory. Another one-yard QB sneak by Bauserman pulled Swink within three points at 22-19. Trevin Holland kicked the extra point, and the score stood at 22-20.

From that point forward, it was all Wildcats, as they took complete control.

A long pass from Eaton to Daunte Maldonado put them in the red zone.

Eaton then hit Maldonado for a short touchdown pass and then connected with Dominguez for the two-point conversion. Holly’s lead grew to 30-20 with 7:18 left in the game.

After a Pecina interception, Dominique Maldonado broke a 29-yard touchdown run to ice it. After the extra point, Holly led 37-20 and the scoring was complete.

Swink capped the season with a 6-3 record.

Holly will put an eight-game winning streak on the line.

PLAYOFF NOTE: A new state champion will be crowned in 2021.

Sedgwick County saw a 23-game playoff winning streak come to an end with its 36-18 home loss to Sanford last Saturday.

The Cougars had won the last six state championships in 8-man (the longest such streak in 8-man football in Colorado history).

Before Saturday, the Cougars last suffered a playoff loss to Granada in a first round game in 2014.

Sedgwick County, as a program, is a stellar 25-4 all-time in postseason battles.