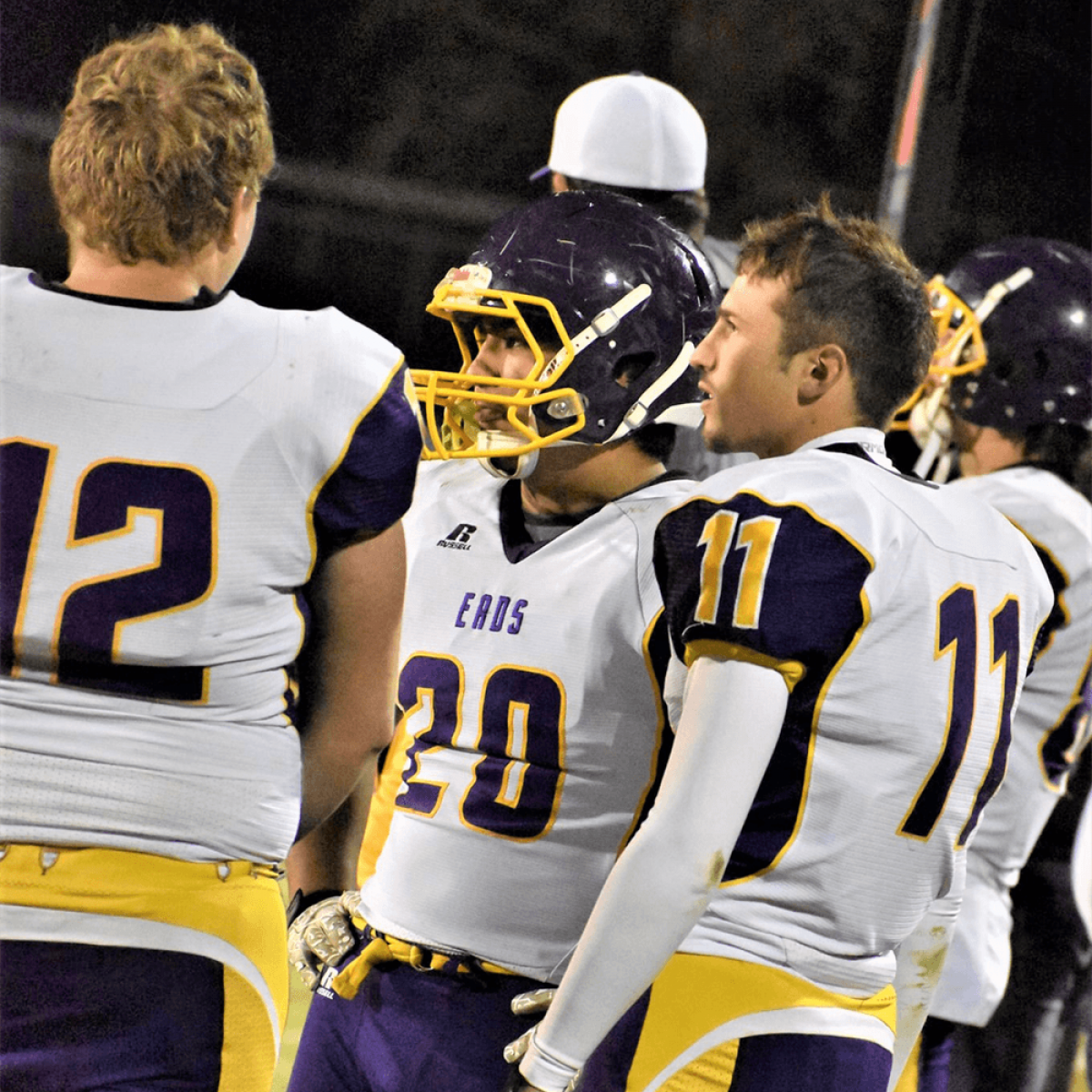 Cover: The Eads seniors ended their season in Stratton on Friday night. Pictured here are three of the four seniors including Cade McDowell (#12), Donte Sierra (#20) and Ty Wilson (#11). Not pictured is senior Chase Stolzenberger. 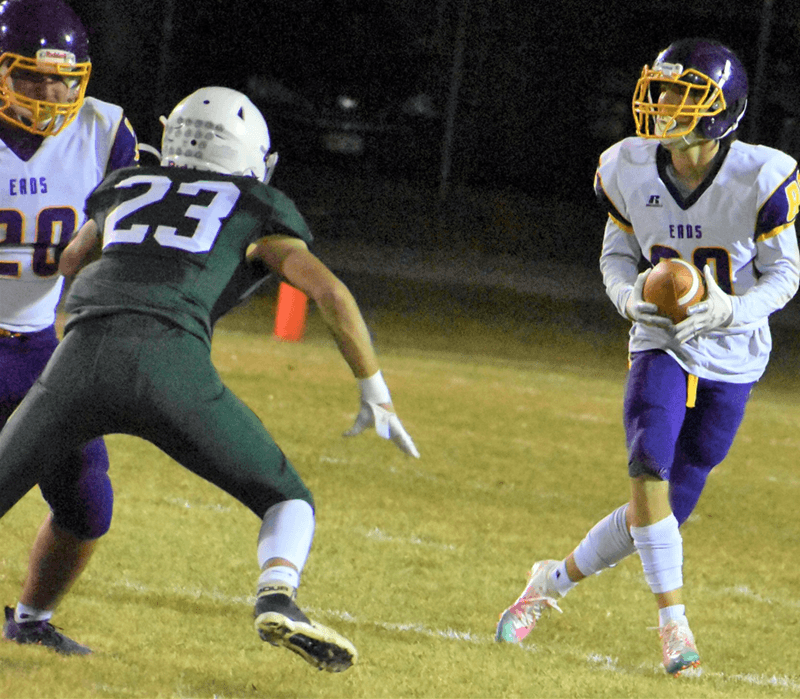 Sophomore Porter Spady looks to run with the ball during 6-Man action in Stratton on Friday night.  Eads ended their season with a 73-8 loss.

The Eads Eagles finished what turned out to be one of the more difficult seasons they have endured as Covid-19 quarantines and multiple injuries to key players resulted in a 4-6 record. With plenty of heart they managed to enter into the first round of the state playoffs as the #15 team, out of 16 qualifiers, but were soundly defeated by #2 Stratton (9-1), 73-8 on Friday night.

Stratton scored nine times on the ground, including four by Charlie Clapper, in winning its eighth straight game. Their only loss came early in the season to the undefeated and top-seeded Cheyenne Wells Tigers.

Eads coach Trey Eder said in an interview, “We knew it was going to be a tough game for us. We had to be near perfect to have a chance. We weren’t.”

On the Eagles’ first possession they went 3-in-and-out and were forced to punt from their own end zone. Unfortunately, the punt was blocked, and Stratton recovered on the Eads 2-yard line. They punched it in for the first score of the game on their first play.

Then, on the Eads second possession, they fumbled on their own 20 yard line and on Stratton’s first play after the recovery they scored a rushing touchdown leaving the score at 16-0.

But, the Eads team regrouped and found some energy on their third possession as senior Donte Sierra broke three tackles down the side line on his way to a 63-yard touchdown run. The Porter Spady PAT kick was good, and Eads was back in the game trailing, 16-8.

But that would be all Eads could muster as the more experienced, fast and physical Stratton group continued to pound away on both sides of the ball. They would score the bulk of their points in the first half including a 32-point first quarter and a 22-point second quarter.

Eder said of the Stratton team, “They certainly earned their #2 ranking.”

Eder was philosophical after the game saying, “This was a season of adversity. We started down before the season even got under way after losing Spady to surgery and it took him 6-8 weeks to be in football shape and ready to go. Then our senior Ty Wilson broke his leg, senior Cade McDowell severely sprained his ankle, and we lost some speed in freshman Stockton Mitchek who broke a collarbone midway through the season.”

In a small program with not many athletes losing one key player really throws a team out of balance. Eads’ season was completely out of balance losing a number of players and forcing the younger and less experienced players to step up and learn different positions and responsibilities very quickly—and under fire.

Eder said, “But it was good for us and made us much stronger mentally.”

Eder was also very complimentary of his four seniors. “Donte Sierra played a huge role for us and just got better each week. He was very successful and a good leader for us.”

“Cade McDowell battled through pain the whole season but continued to do what we asked of him. He was a three-year starter at the Quarterback spot but adjusted when this year we asked him to be on the line as he was our best blocker.”

“Ty Wilson is a tough kid and played a whole game on a broken leg. His passion never waned, and he worked hard to rehab in order to be there for his team in their last game.”

“Chase Stolzenberger didn’t get on the field much, but he was a huge asset at practices and was a good leader for the youngsters sending the message of teamwork. If you show up every day and work hard you can be a big piece of the program. I’d like to thank Chase for that as well.”

Eder finished it off by saying, “Sometimes what is the hardest is the thing that makes you the strongest, and because of that we sure enjoyed this season.”