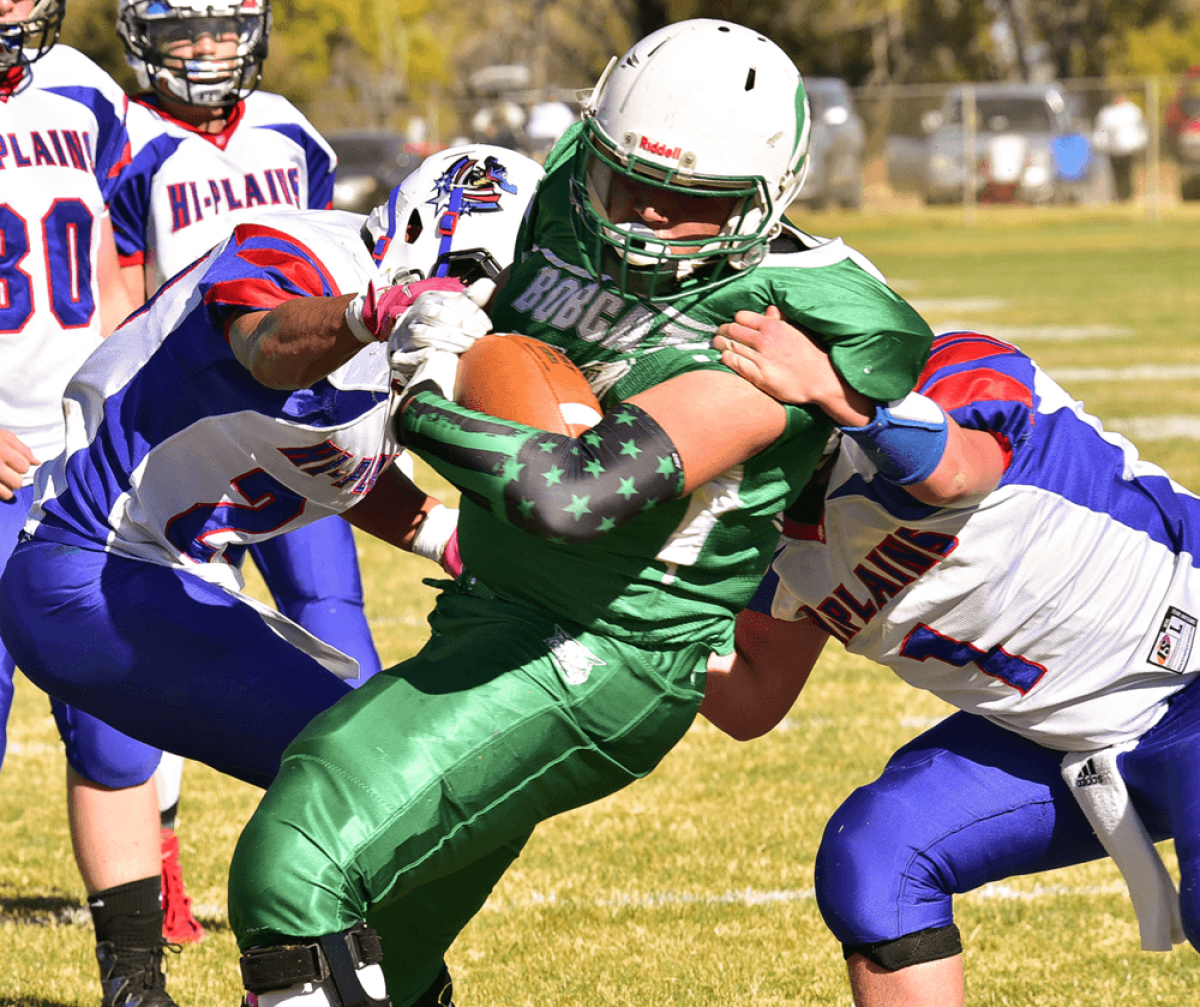 Cover: Granada running back John Hainer spins and pounds his way for a 9-yard touchdown run in the second quarter to put the Bobcats ahead 38-0 after the PAT kick with 1:26 left in the second quarter against the Hi-Plains on Saturday, No. 6 at Manuel Gonzales Field. In a first-round game of the Class A 6-man state football playoffs, Granada dominated the contest, 52-14. The Bobcats (8-1) will travel to face Sierra Grande (9-0) in a state quarterfinal showdown next weekend. 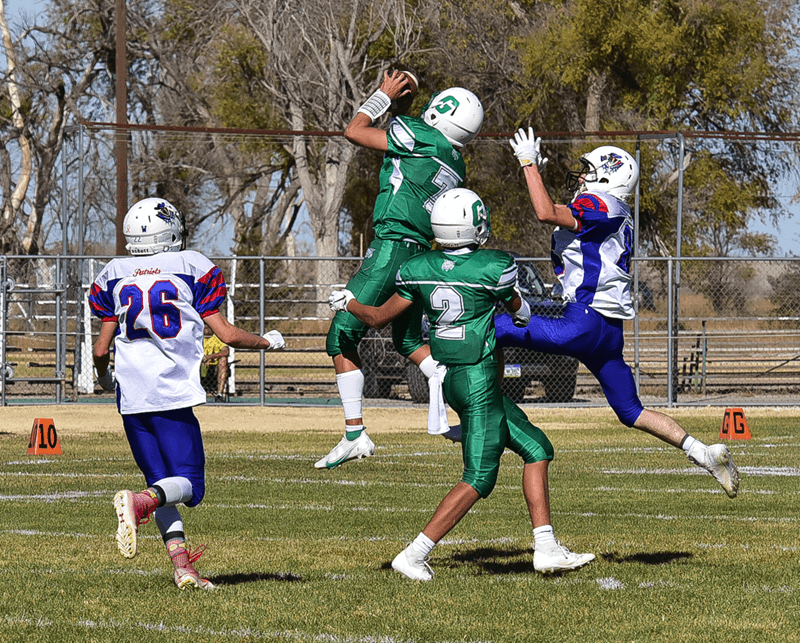 Granada’s Dominic Coleman picks off one of his two interceptions he had against Hi-Plains in a first-round game of the Class A 6-man State Playoffs on Saturday, Nov. 6 in Granada. Coleman returned one of those interceptions for a 20-yard TD. The Bobcats steamrolled to a 52-14 victory.

In Granada’s game with Hi-Plains, the Bobcats took advantage of turnovers to build a 52-0 lead at halftime.

The Patriots faced a fierce pass rush for the most part and threw four interceptions and lost one fumble.

On offense, quarterback Dominic Coleman had a good afternoon as he completed 5-of-5 passes for 130 yards and 3 TDs. He also picked off two interceptions including one for a touchdown.

Maddox Coleman was the leading receiver with two catches for 76 yards and 1 TD. John Hainer also caught two passes for 36 yards and 2 TDs.

Granada took control of the game early as they rolled to a 38-0 lead after the first quarter.

The Bobcats received the opening kickoff but turned the ball over on a fumble.

Hi-Plains returned the favor when a pass was intercepted by Brandon Gonzales.

From the Hi-Plains 39, Granada scored in just three plays.

D. Coleman and his brother Maddox combined for a 31-yard completion on the first play to the 11-yard line.

After a run for two-yards, the Bobcats hit paydirt on a 9-yard TD pass from D. Coleman to John Hainer. The extra point kick was good by Ivan Yanez to make it 8-0 with 6:58 showing.

The Patriots would turn the ball over two plays later when another pass was picked off by D. Coleman and he returned it 20 yards for a touchdown. Yanez kicked over the PAT for a 16-0 lead with 6:11 on the clock.

After the ensuing kickoff, the turnover bug continued to plague Hi-Plains.

The Patriots fumbled the ball on the third play and it was recovered by Oryan Hainer in good field position at the 20.

On the first play, Guevara found a huge hole up the middle and raced into the endzone on a 20-yard run. The kick failed as the score stood 22-0 with 5:09 left in the quarter.

Hi-Plains took over on its own 15 after the kickoff. On the third play, another pass by the Patriots resulted in another interception by D. Coleman.

From the Granada 34, the Bobcats hit paydirt in two plays on a 50-yard TD bomb from Coleman-to-Coleman. The PAT kick was good to bring the score to 30-0.

Following the ensuing kickoff, Hi-Plains turned the ball over on downs.

From the Patriots’ 24, Hainer picked up 16 yards to the eight-yard line.

On the next play, Hainer’s number was called again as he used some spin moves to break tackles and reach the endzone. The kick was successful, and the score was extended to 38-0.

In the second quarter, Granada would score twice.

D. Coleman hooked up with Hainer for a 27-yard TD strike. The PAT kick was good by Jose Sanchez to make it 46-0 with 6:45 showing.

A running clock then came into play after the Granada score.

Following an interception by Aldolfo Garcia, the Bobcats would score again with under two minutes left on a seven-yard TD run by Oryan Hainer to give the Bobcats a 52-0 lead at the half.

Eight teams now prepare for the state quarterfinals coming up next weekend.

Sierra Grande’s 39-36 win over Kim/Branson on Saturday marked their first victory in the postseason since 1985. The Panthers had just two prior playoff wins and both came in 1985 as they reached the state championship game that year. They had been outscored by a total of 176 points while losing their previous five playoff contests.

Cheraw chalked up their first playoff win since 1993 as they moved past Arickaree/Woodlin 54-22 on Saturday. It was just the third playoff win in school history with previous victories coming against Hi Plains in 1993 and Peetz in 1990.

(Dates and times to be announce)