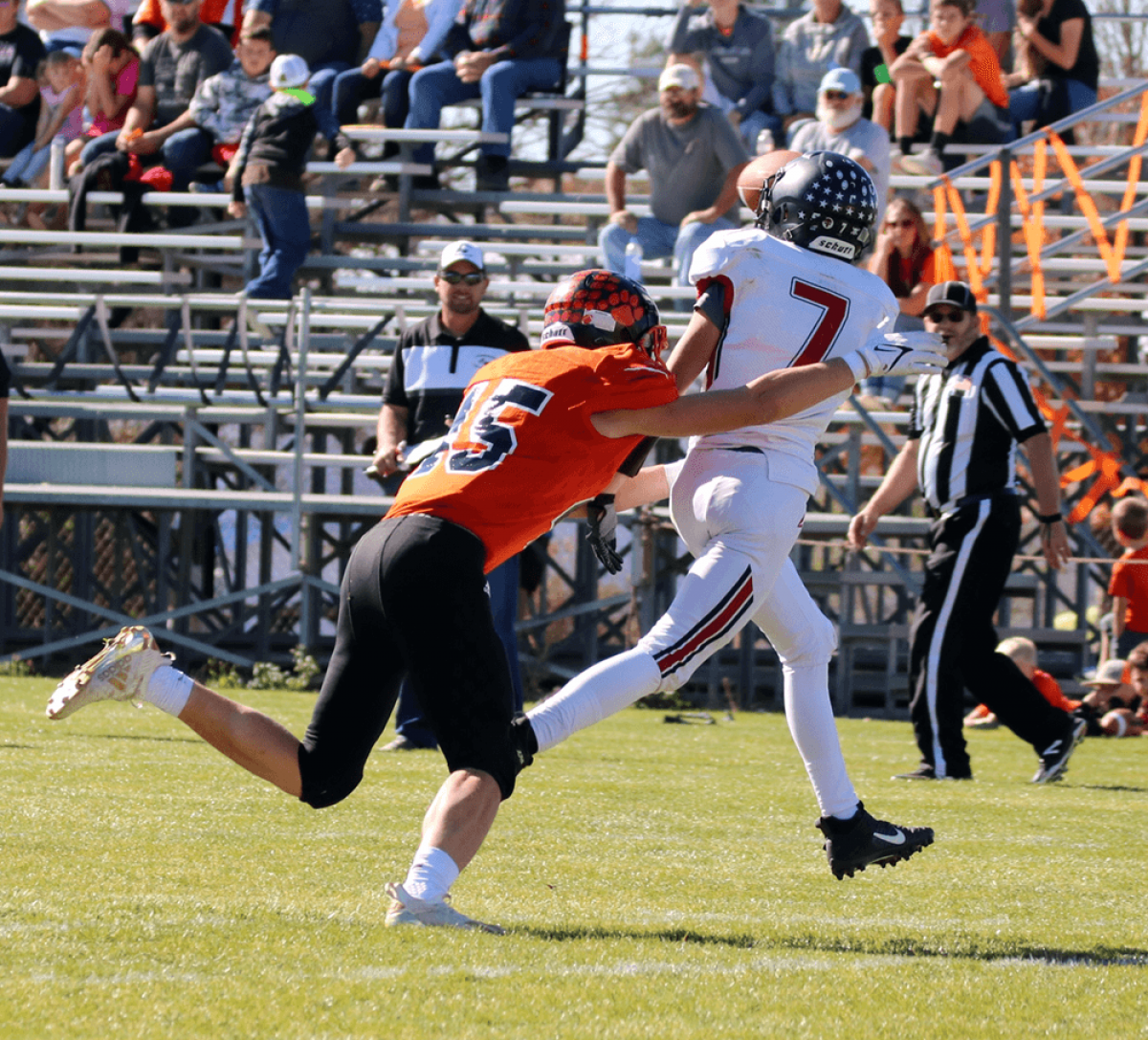 The Cheyenne Wells Tigers remained undefeated in the season as they eliminated Mountain Valley (6-4) in the first round of the state playoffs on Saturday, November 6.

The players of the game according to KNAB Radio out of Burlington were the Mountain Valley seniors, and Evan Worley and Cade Mitchek of Cheyenne Wells.

The win advanced the top-ranked team in the state into the state quarterfinals where they will travel to #8 Prairie (7-4) in New Raymer on Saturday, November 13 at 1:00 pm.

The Tigers scored 10 touchdowns against the struggling Mountain Valley crew and Jesse Harlow, Tiger kicker hit 6 of 7 PAT attempts in the win.

The first quarter ended with Cheyenne Wells in charge 38-6. Mitchek started things off with a 39-yard touchdown run. Worley added a three-yard power punch for the second touchdown in the quarter.

The next score came from the air as Blake Gilmore found Kody Ryser for a 26-yard TD strike midway through the first quarter.

Mitchek then put exclamation points on the quarter with a 5-yard touchdown run and then a 59-yard punt return to the house.

The second quarter saw the Tigers extend their lead to 61-6 effectively turning on the running clock before the first half was in the books. Rogelio Rangel scored first in the second period on a 13-yard scamper to the end zone. Worley then punched in another TD from 13 yards out. Finally right before the intermission, freshman Bryson Hyle ran one in from 16 yards out.

Ty Scheler got into the action in the third quarter with two touchdowns of his own. One came with a 2-yard power push and the second TD was on a 16-yard run.

Junior quarterback Blake Gilmore went a perfect 2-for-2 for 41 yards and 2 touchdown tosses.

But, again, it would be the continued strong ground game that uses a total of 9 runners that dominated the Mountain Valley crew.

Senior Cade Mitchek again led the rushing attack with 4 carries and 77 yards that resulted in 2 touchdowns.

Rangel also had a catch for 15 yards. Senior Kody Ryser caught 2 passes for 41 yards and 1 touchdown.

The Tigers tallied up 356 all-purpose yards.

Harlow also scored 12 points with 6 PAT kicks. Perry Chadwick was a perfect 1-for-1 on PAT kicks.

Defensively, the Tigers controlled Mountain Valley from start to finish. They had a collective team effort of 38 tackles including 5 apiece from Mitchek, Scheler, Worley and Rangel. Hyle added 4 tackles.

Worley also had 2 sacks while Hyle added another sack.

Mitchek had 1 interception for the Tigers.

The quarterfinals will match up the powerhouse offense from Cheyenne Wells with a trio of three players who carry the offensive load for Prairie.

Senior Andy Long has racked up 1,423 yards passing on the season and averages 17.1 yards per pass. Claytin Hove, a junior, carries the load on the ground leading the team with 781 yards (9.0 per carry). David Speicher leads in receptions with 849 yards with 26.5 yards per catch.

Prairie defeated Genoa-Hugo, 47-15 in the first round.

Tiger head coach Myles Smith said in an interview on Monday, “Prairie is a good football team. We know that after beating them a few weeks ago, they are going to be fire up and ready to play this Saturday. Our boys need to continue to play well in all 3 phases of the game and play smart this weekend. It’s never easy going on the road in the playoffs, but these guys are ready for the challenge ahead and looking forward to the opportunity we have in front of us.”