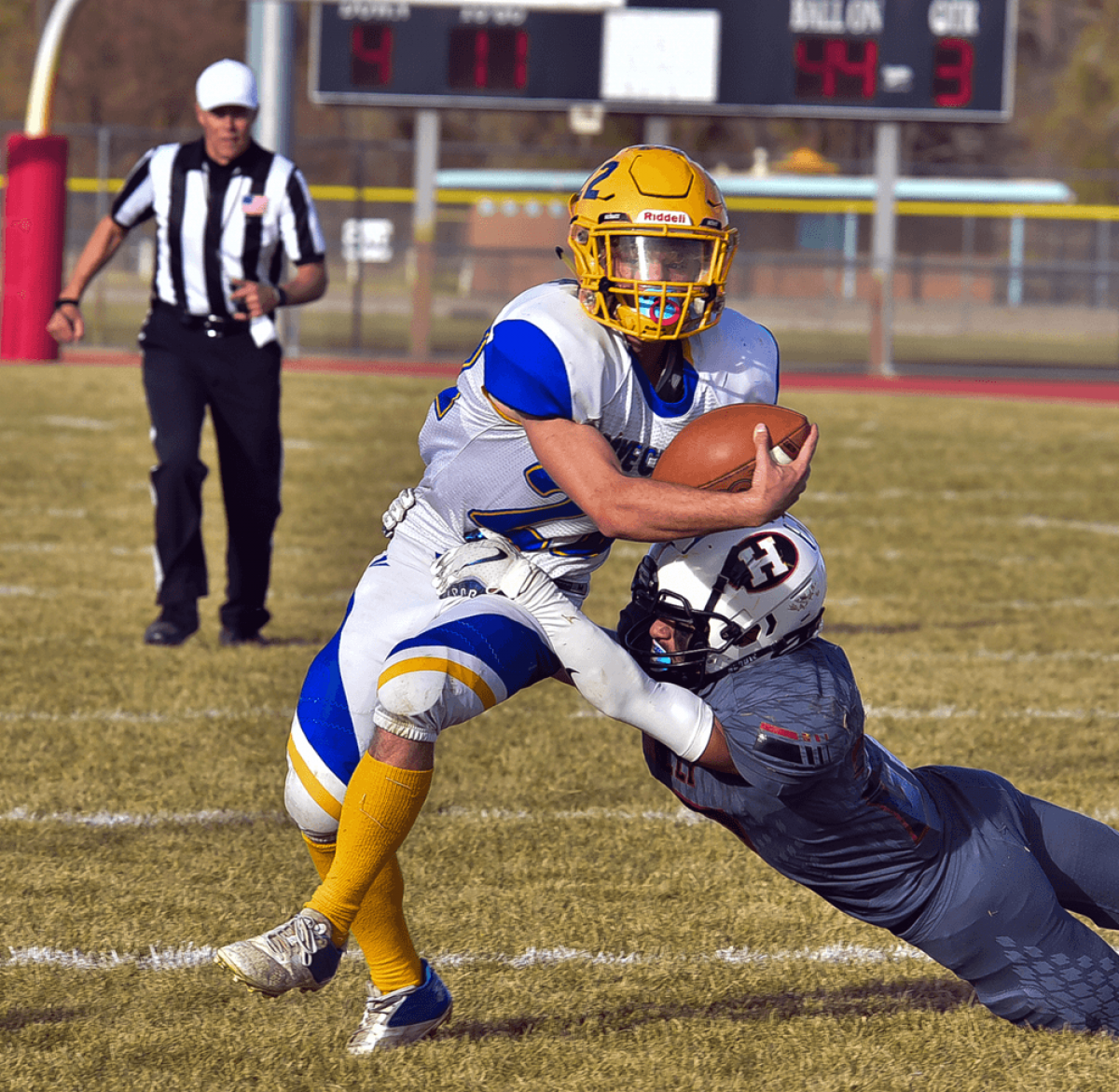 For the second week in a row, the Holly Wildcats hosted a home playoff game on a perfect Saturday for football.

The Wildcats entertained the Dove Creek Bulldogs who made a long eight-hour trek across the state for the game.

With a good crowd on hand, the Wildcats treated their fans to a 64-22 victory to end the season for the Bulldogs.

With the win, Holly ran its record to 10-1 and riding a nine-game winning streak.

The Wildcats will next travel to Haxtun on Saturday, Nov. 20 where they will face the undefeated and No. 1 team in the state in the Final Four. The kickoff is set for 2 o’clock.

It will mark the fourth meeting between the two teams.

The Fightin’ Bulldogs sport an 11-0 record and coming off a 42-24 win against Akron in the quarterfinals.

Akron was the team that handed Holly its only loss 36-30 in overtime during Week 2 of the season.

The margin of victory against Dove Creek came as a surprise for Holly senior running back Donovan Pecina but he said he’ll take it.

“We didn’t expect the score to get that high,” he said. “We expected this game to be a dogfight but our offense and defense really stepped it up. This is the farthest we’ve been in the state playoffs in a while. Now, we go to Haxtun for the semifinals and one game away of playing for a state championship. I know our guys are excited for the matchup.”

Holly head coach Dayne Eaton was all smiles after the game.

“This was a heck of win for our guys,” he said afterwards. “They matched up well with us and very much like us. I’m super proud of how are guys stepped up defensively. We knew we had to control their quarterback from running the ball and come up and gang tackle.”

Dove Creek sophomore quarterback Chorbin Cressler and senior running back Kade Hankins combined for 251 yards in a 50-0 shutout against Crowley County last week. Cressler had 117 and 2 TDs and Hankins had 134 with 1 TD. Gage Buffington, a strong sophomore running back, added 70 yards and 1 TD.

On the ground, Eaton also had a big afternoon with 117 yards on 7 carries and 2 TDs.

Pecina and Daunte Maldonado led the defense with 9 tackles each including 5 solo tackles apiece.

Swopes had 2 sacks to give him 17 for the season. Salgado had 2 interceptions amd Devin Eaton had 1 fumble recovery.

Holly took a 16-6 lead after the first quarter against Dove Creek and never looked back.

The Wildcats then scored 19 unanswered points in the second quarter to build a 35-6 lead at halftime.

Holly’s lead stood 50-22 after the third quarter and the Wildcats would tack on two more scores in the fourth quarter.

The Wildcats faced 4th-and-5 from the Dove Creek 20 when quarterback Dakota Eaton raced around the left end for the score. Josue Avalos kicked the extra point and hometown team was ahead 7-0 with 9:16 showing on the scoreboard.

After the ensuing kickoff, Holly put together another 60-yard scoring drive that was capped on a nice 32-yard field goal to put the Wildcats ahead 10-6 with 5:22 left in the first quarter.

From the Dove Creek 48, the Wildcats scored in five plays.

On the next play, Eaton connected with Fernando Dominguez for a 19-yard pass to the 19.

After a running play netted no yards, the drive was capped on a 19-yard TD strike from Eaton to Colby Swopes. A pass failed on the extra point and the score stood 16-6 with 1:59 remaining in the quarter.

To the delight of the Holly fans, the second quarter belonged to the Wildcats who scored three times.

After the Holly defense stopped the Bulldogs on fourth down, the Wildcats took over at midfield.

On the seventh play of the drive, Eaton scored on a five-yard run. The touchdown was nullified on a holding penalty.

On the next play, Eaton connected with Dominguez who made a spectacular one handed grab for a 19-yard TD strike. The PAT kick was good and Holly’s lead was extended to 23-6 with 8:46 left in the second quarter.

Following a punt by the visitors, Holly put together a 65-yard drive that over six minutes off the clock.

The drive culminated on a one-yard plunge by Pecina that stretch the lead to 29-6 with 2:29 left in the first half.

With a minute left, Eaton threw a pass to Pecina who streaked down the sideline for a 59-yards for a touchdown. A two-point conversion was no good.

After a dominant first half, the Wildcats headed into the locker room with a 35-6 lead.

To open the second half, Holly tried an onside kick and it failed.

Dove Creek took over in great field position at midfield.

The Bulldogs scored in four plays on 19-yard pass from quarterback Chorbin Cressler to Gage Buffington who broke a few tackles along the way. A pass to Cole Tabor was good on a two-point conversion to bring the score to 35-14.

Holly countered with a nifty hook and ladder play for a touchdown.

Eaton threw a 10-yard pass to Dominguez who then pitched a lateral to Daunte Maldonado who sprinted down the visitor’s sideline for a 43-yard touchdown. The extra point kick was good by Avalos as Holly increased its lead 42-14

With 24 seconds left in the third quarter, Eaton scrambled 30-yards down the sideline for another touchdown. Andre Salgado ran over two-point conversion and the Wildcats held a 50-14 lead.

The Bulldogs scored when Buffington broke an 80-yard kick off return for touchdown. A run by Hankins on the extra point was successful to end the third quarter at 50-22 in favor of the Wildcats.

In the fourth quarter, Holly added a pair of touchdowns to close out the game’s scoring.

The Wildcats scored on a 52-yard touchdown pass from Eaton to Eli Ramos. A fake kick resulted in two-point conversion on a pass to Salgado to make it 58-22 with 9:24 showing.

The final score for Holly came on a great defensive play when Dominique Maldonado batted a pass in the air and landed int the hands of Salgado who returned it down the sideline for a touchdown. Maldonado also added a two-point conversion to put the icing on the cake.