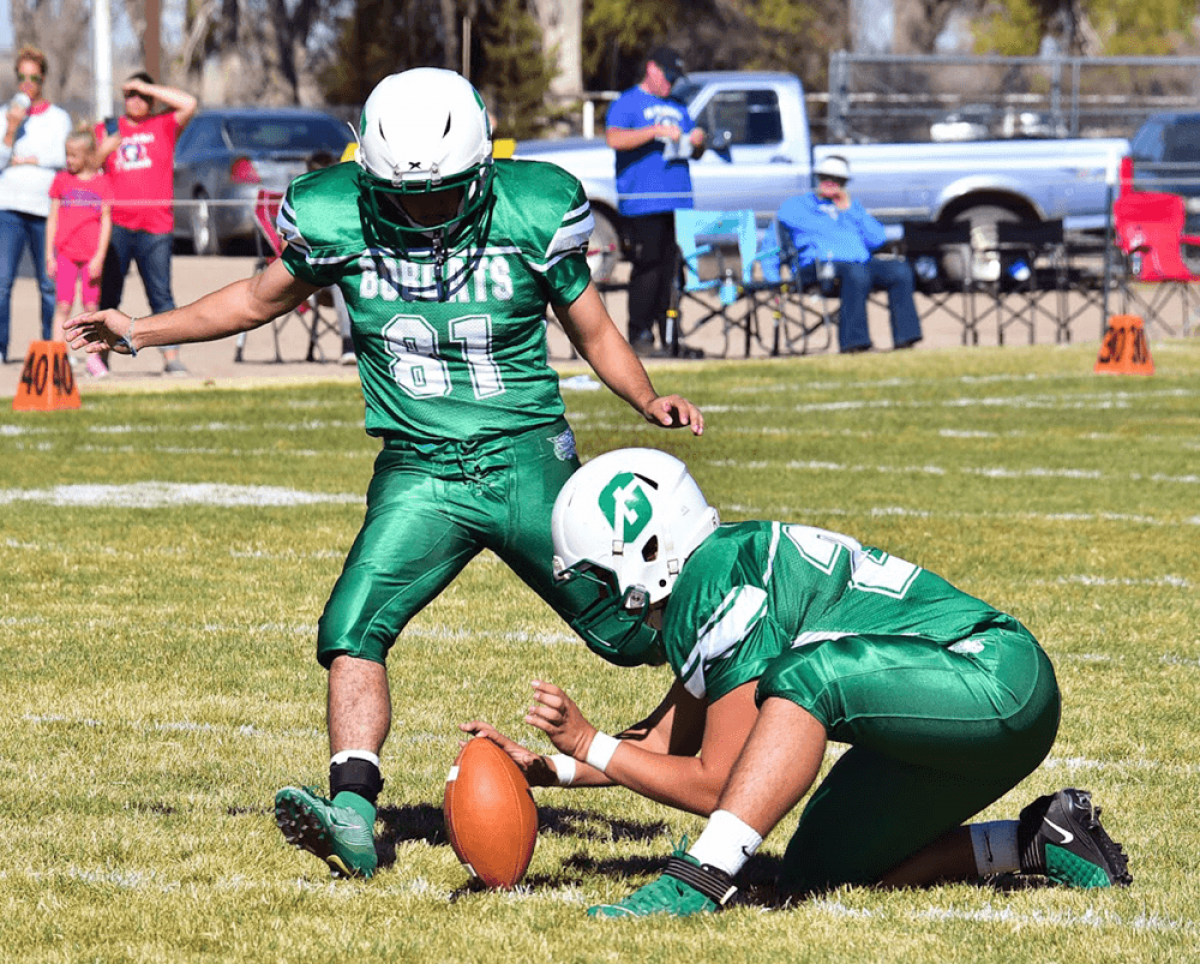 Congratulations to #81 Ivan Yanez for being selected the Special Teams Granada Football Player of the Game.

The No. 3 seed Granada Bobcats traveled to face unbeaten Sierra Grande in the quarterfinals of the 6-man state playoffs on Saturday, Nov. 13. The game was played at Sangre de Cristo High School.

Granada survived a scare and trailed 44-40 with mere seconds remaining.

With the season on the line, the Bobcats scored with just seconds left in the game on a five-yard touchdown strike from Dominic Coleman to Brandon Gonzales with seven seconds left to post a dramatic 48-44 comeback victory.

The loss ended the season for Sierra Grande with a 9-1 record.

Granada is now one game away of playing for the 6-man state championship.

Standing in the way for the Bobcats will be the Stratton Eagles. The two teams will collide in a state semifinal showdown at 1 p.m. on Saturday, Nov. 20 in Stratton.

“We figured we’d be seeing Stratton if we had a chance for a deep playoff run,” said Granada head coach Traegon Marquez. “We have a lot of respect for their program and our two programs share a lot of history from our 8-man days.”

“Stratton is really well coached, disciplined in their game play, and they have a lot of weapons to deal with,” Marquez said. “We think we have the guys to match up with them really well and we’re expecting a great game. This is the round where we fell short last year and our guys want to take the next step. We know they have a really good ball club but so do we and anything can happen in playoff football.”

Stratton is coming off a 62-0 rout against the Cheraw Wolverines last week.

Looking back at the game with Sierra Granada, Coach Marquez said.

“It ended up being a great comeback game,” he said. “We had opportunities to pull away early in the first half but we turned over the ball. They had a spread offense and great team speed that gave us fits.”

“They controlled the third quarter and found a way to get up by 10 points,” Marquez explained. “We scored and needed a stop and found it to take the lead. They fought back and took the lead back with 50 seconds left.”

“We received the ball and drove down to their five-yard line,” said Coach Marquez. “We ran the clock down before calling a timeout with 15 seconds left to leave us time for two possible plays to score with no timeouts remaining. We called a play action pass and the first option wasn’t open. Dominic bought time for receivers to get open and Brandon made a diving catch in the corner of the end zone. That ended up being the game winning score. After the kickoff, Sierra Grande had one play to get in the end zone and our boys made a stop at midfield to seal the win.”

Some of the turnovers that Coach Marquez referred to were two fumbles by running back John Hainer. One was on the goal line to score.

Dominic Coleman also had a fumble and an interception. The interception was in the end zone to score.

“Sierra Grande capitalized on those turnovers and the momentum swung in their favor,” said Coach Marquez. “We took the ball away five times but none more important than the last one where Dominic held up the runner and stripped the ball and Oryan Hainer recovered it.”

“They did their best to take away Maddox as a passing threat but that opened up running lanes.” Coach Marquez said. “Jonus Guevara ran hard behind some huge lead blocks from John (Hainer) and Dominic (Coleman).”

On offense, Guevara had a huge night with 239 yards rushing on 16 carries.

B. Gonzales had 2 receptions for 14 yards. Both catches were for touchdowns.

The Bobcats recovered 5 fumbles in the contest. D. Colman, Hainer, Hernandez, O. Hainer, and Guevara all had 1 fumble recovery.

Granada took a 14-6 lead after the first quarter with Hainer scoring on a pair of one-yard runs.

The Bobcats tacked on two more scores in the second quarter to hold a 28-19 lead at the half.

Sierra scored twice in the third quarter to take a 32-28 lead while the Bobcats failed to score in the quarter.

Granada would outscore the Panthers, 20-12, in the fourth quarter to seal the victory.