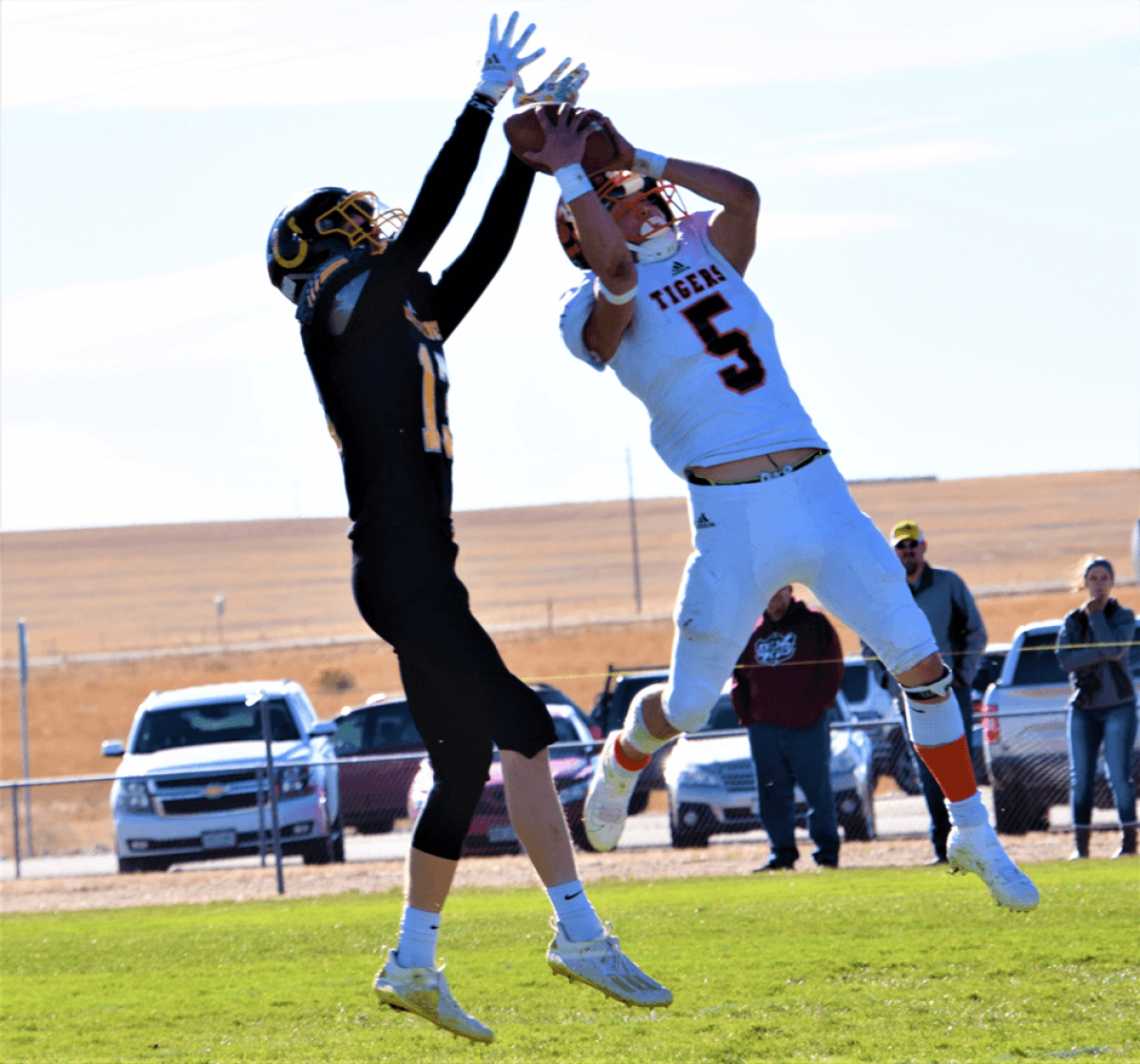 Cade Mitchek intercepts a well-placed ball during quarterfinal action in Prairie on Saturday, Nov. 13. Mitchek scored on the pick off leading his team to a 76-32 victory.

The Cheyenne Wells Tigers maintained their undefeated status, now 11-0, on the road at Prairie in a strong offensive performance that earned them a 76-32 win and the chance to move ever closer to the state championship. Next up will be Idalia in the semi-finals as the Wolves have been playing well as of late soundly defeated Fleming, 64-28.

The Tigers used a tremendous first half to grab the victory as they scored 62 points in the first two quarters alone. That included an array of touchdowns coming from senior Cade Mitchek who scored on the ground, from the air, and on a kickoff return and then a punt return.

On the Tigers’ first possession Mitchek scored in on a rushing play. The kick from Jesse Harlow was no good, but the Tigers grabbed the very early advantage, 6-0.

After a defensive stop on Prairie, the Tigers got the ball back and scored again at the 6:18 mark of the first period on a Rogelio Rangel 28-yard TD scamper. This time the Harlow kick counted making the score 14-0.

Prairie got on the scoreboard with just over three minutes left in the first quarter on a 29-yard pass play from senior Andy Long to classmate David Speicher. The PAT kick was blocked leaving the score with CW holding a small advantage, 14-6 at the end of the first period.

The second quarter was a track meet as both teams flew up and down the field. The Tigers would score 6 touchdowns in the quarter, after Prairie woke them up early. On the Prairie first possession at the 9:30 mark Carter Jaeger scored from 11 yards out. The PAT kick was good, and Prairie sent a clear challenge to the Tigers tying the score at 14-14.

The Tigers answered that challenge for the rest of the quarter as Mitchek first scored on a phenomenal 57-yard touchdown run with 8:22 on the clock. The Harlow kick made the score, 22-14.

As Prairie was marching down the field on their next possession, Mitchek intercepted a Prairie pass. It took the Tigers just four plays to set up a pass play between quarterback Blake Gilmore and Rangel that hit paydirt from 42 yards out. Harlow hit another PAT leaving the score at 30-14.

The Tigers then recovered the ball as they tried an onside kick-off. It took Mitchek two plays to run the ball back into the end zone from 28 yards out making the score 38-14 with 5:44 left in the first half.

But give Prairie a little credit due as they continued to find some success from the air. At the 4:01 mark Long found Jaegers on a 49-yard touchdown strike. The Clayton Hove PAT kick was no good leaving the score at 38-20.

With just under four minutes to go in the first half, the Tigers’ all-out aggressive effort resulted in three more touchdowns before the buzzer sounded.

Mitchek took the ensuing kick-off 72-yards to the house with just seconds clicked off the clock. The Harlow kick was again on line leaving the score at 46-20.

With just over a minute left before the intermission, Mitchek busted another run wide open scoring on a 38-yard rushing touchdown. Harlow’s kick check, and the Tigers extended their lead to 54-20.

But the Tigers weren’t done yet. With just ten second before halftime Prairie was forced to punt the ball and the ball ended up in Mitchek’s hands who promptly scampered his way to yet another touchdown, this time on a 51-yard punt return. Jesse Harlow continued to be very accurate, and another PAT kick went his way leaving the score at 62-20 at the intermission.

The Prairie coaches made some good adjustments at the break resulting in an immediate touchdown on their first play from scrimmage to open the second half leaving the score at 62-26.

Cheyenne Wells continued to play well defensively in slowing Prairie’s attack. This allowed their offensive game a lot of ability to score in multiple ways. With 7:40 on the clock Gilmore hit Mitchek in a 45-yard TD connection. Harlow added two more points leaving the score at 70-26.

The mercy clock was activated at the 4:36 mark of the third quarter when Rangel powered the ball into the end zone from 15 yards out. That Harlow kick was blocked, but the score was out of control with the Tigers leading 76-26.

Head coach Myles Smith used his youngsters very liberally throughout all of the final period of play in essence protecting his starters from injury and slowing down the Tigers offensive power. The Tiger freshmen and sophomores played well allowing just one more Prairie touchdown from their starters when Long hit M. Mertins on a 30-yard pass play that found the endzone leaving the score 76-32.

The clock quickly wound down ending Prairie’s season and advancing the Tigers to the semifinals round of the 6-Man State Football championships.

The Tigers won the ground game against Prairie generating 275 yards. But Prairie’s air attack was effective netting them 244 yards. The Tigers won the All-Purpose Yardage contest over their opponent with 574 yards to Prairie’s 426 yards. The defensive effort for both teams was pretty even except in the sacks department where Cheyenne Wells carried a 7 to 3 advantage.

Tiger quarterback Blake Gilmore was 5 for 10 in completions for 179 yards in the air and 2 touchdown connections.

Mitchek also led the team from the air hauling in 2 passes for 55 yards and a TD. Rangel grabbed 2 of his own for 54 yards and a touchdown.

Harlow is a tremendous asset for the Tigers as he was 8-for-10 in PAT attempts scoring 16 points.

The Tigers will now get to host Idalia who is coming off of a solid win over Fleming, 64-28. The Wolves are 9-2 having lost an early-season contest with Granada, 62-14 and a mid-season loss to Stratton, 32-16. The semifinal clash in Cheyenne Wells will be held on Saturday, November 20 starting at 1:00pm.

Head coach Myles Smith said of the Idalia game, “We are really excited about the opportunity we have to play Idalia at home in the semis this weekend. They are also a physical team with quite a few weapons. They have been playing some good football as of late, so we will need to play really well in all 3 phases. Our team has been to this point the past two years and haven’t been able to punch our ticket into the championship. That has these guys really focused and motivated to do something special this season.”

In other quarterfinal 6-Man games, Granada had to come from behind to grab a close 48-44 win over Sierra Grande, and Stratton took care of Cheraw, 62-0. Granada will travel to Stratton for their semifinal showdown next Saturday.