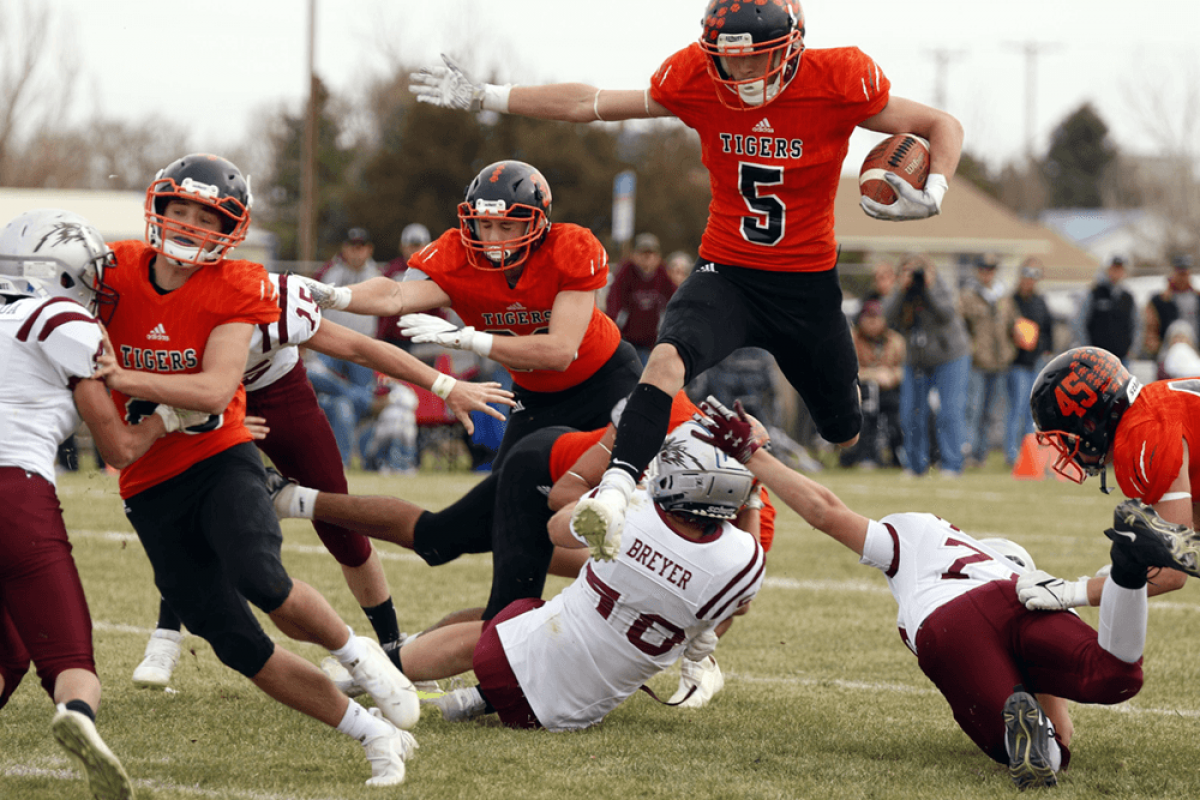 While a host of Cheyenne Wells blockers clear a path, Tiger senior Cade Mitchek (#5) leaps over the defense on his way to a touchdown. Mitchek had 4 touchdowns on the ground against Idalia in the semifinals.

Head Coach Myles Smith knows what it’s like to come in second place and is making sure his senior-laden and experienced Cheyenne Wells Tigers will finally overcome the runner-up curse and get the ever-elusive championship trophy this time around against a Stratton group who has taken away that dream in the semifinals during last two seasons. Smith believes this go around his boys are ready.

After defeating a solid Idalia group in the state semifinals on Saturday in Cheyenne Wells, 64-24, Smith said in an interview with the Colorado Preps, “Getting into the championship game with another shot at the title means a lot for the past players as well as these guys. They’ve really put in the work. We can take a great big step in the right direction for our program. Finally getting a title is long overdue.”

Stratton has a tradition of excellence in the post season and has been the team to eliminate Cheyenne Wells in the semifinals in the past two seasons. This year they lost to Cheyenne Wells early on in a 62-32 game, but since then has rattled off win after win culminating with an impressive win over a tough Granada group, 78-26, in the other state semifinal contest.

Idalia is a strong physical team, and it took the Tigers a little bit of time to utilize their impressive ground game against the Wolves’ defense. Smith said, “The guys came out and competed for all four quarters. It was a really hard fought, physical football game. We were able to keep their run game in check for most of the day, however, they had some pass plays that worked against us.”

The Tigers took the first possession of the game but went a quick four-in-and-out handing the ball to the Wolves’ offense. On their second play from scrimmage, CW senior Rogelio Rangel picked off a pass at the 33-yard line. Tiger quarterback Blake Gilmore soon found Rangel for a 23-yard pass completion putting the Tigers on the Idalia 10. On the next play, senior running back Cade Mitchek punched it in for the first touchdown of the day. The Jesse Harlow PAT kick was no good, but the Tigers grabbed the early advantage, 6-0.

Senior Kody Ryser was effective in keeping the Wolves deep in their own territory as his kick-off went into the end zone for a touchback.

With 6:59 left in the second period the Tigers found the end zone once again after Mitchek had made a 35-yard run putting the Tigers in good field position with a first down. Gilmore then found Mitchek in the end zone for a high-flying touchdown from 20 yards out. The Harlow kick, this time, was dead on and the Tigers had the 14-0 advantage.

The Wolves senior running back Yahir Enriquez then broke one open for a 40-yard run but was caught from behind by Mitchek saving the touchdown. Dillon Ball then forced a fumble and the Tigers recovered on their own 19-yard line.

But by the 3:39 mark of the first half the Wolves threatened again when Enriquez caught a 35-yard pass on 4th down and 17 taking Idalia down to the Cheyenne Wells’ 3-yard line. Enriquez punched the ball in there and the Eduardo Estrada kick was good bringing the Wolves back into the contest but still trailing 14-8.

The Tigers quickly answered as Mitchek scored on a 33-yard TD run with 1:20 left on the clock. The Harlow kick was also good, and the Tigers went into the lockers with a 22-8 advantage.

Smith indicated the second half was key to the Tigers’ win, “It took some time to get going. But the guys stuck to the game plan, and we were able to hold onto the ball. In the second half we mostly stayed on the ground and stuck with what has been working for us all year.”

Rangel got busy in the third scoring at the 7:04 mark of third quarter on a 24-yard touchdown run. The kick failed, but the Tiger lead was extended to 28-8.

After holding the Wolves’ attack, senior Evan Worley got things moving on the ground for the Tigers on their next possession. Worley ran for back-to-back first downs getting the ball down to the Idalia 29-yard line. Rangel caught a tough pass from Gilmore adding 20 yards to the nine. Finally, Mitchek was able to punch it in on 3rd down from 3 yards out. The Harlow kick was blocked, but the Tigers continued to extend their lead to 34-8 with 3:18 left in the third quarter.

Mitchek then intercepted an Idalia pass at the Cheyenne Wells two-yard line saving a Wolves touchdown. The senior then took the hand off on the next play from scrimmage down to the Idalia 6-yard line. With :55 seconds remaining in the quarter Worley powered the ball across from 6 yards out. The Harlow kick was dead on, and the score was getting out of control with the Tigers leading 42-8.

However, the Tigers took a little nap and the Wolves attack with :40 left in the quarter as Titus Bland took the first call from scrimmage to connect with Enriquez on a nice 40-yard touchdown pass play. The Estrada kick was good, and Cheyenne Wells had to settle with a 42-16 score going into the final period of the state 6-man semifinal contest.

The Tigers scored right away as Mitchek ran the ball in from 7 yards out with 8:12 left in the game. The kick was good for Harlow and the score was now 50-16.

The Tigers scored again at the 6:20 mark as they used a couple of nice pass plays to march down the field culminating with a 15-yard touchdown run by Rangel. The kick failed but that left the score with the Tigers in full control, 56-16.

As Idalia was getting dangerously close to setting off the mercy running clock rule they gained a few points back on their next possession scoring at the 5:58 mark on another pass play. Bland found Ky Townes this time from 10 yards out and Estrada put the frosting on the cake leaving the score at 56-24.

The final score of the game came for Cheyenne Wells with 4:38 left. Mitchek set the touchdown up on a 35-yard run getting the first down and the ball to the Idalia 27. Senior Ty Scheler then made an impressive sideline run scoring a 27-yard touchdown. The kick was good leaving the final score at 64-24.

Senior quarterback Gilmore had a strong day connecting 8-of-14 attempts for 133 yards and a touchdown.

The Cheyenne Wells ground attack was phenomenal as they use four and five runners each game who are hard to bring down. On Saturday it would be Mitchek leading the way with 27 carries for 230 yards and 4 touchdowns. Scheler had one carry for 27 yards and a TD, while Rangel carried twice for 18 yards and a touchdown and Worley carried 15 times for 96 yards and 2 touchdowns.

Cheyenne Wells had 574 all-purpose yards with Mitchek leading the way with 323 yards.

Defensively, the Tigers recovered one fumble and intercepted the ball twice.

Scheler and Dillon Ball led in the tackling department with 10 apiece. Worley had 8 take downs, while Mitchek added 7 tackles and Rangel with 4 tackles.

Now it’s time for the Tigers to set their entire focus squarely upon the Stratton Eagles who have upset their march to a championship too many times.

Smith said, “It feels great. I’m just proud of these guys. They’ve put in a ton of work to get here. It’s great for our program. Last year we had some bad luck with injuries. This year we’ve been playing well. We expect a lot of the same. We know it’s going to be really physical. They’ve beat us the last two years. We’re looking forward at getting back at them.”

The 6-Man Championship contest is slated for Friday, November 26 at 1:00 pm at the CSU Pueblo Thunderbowl.