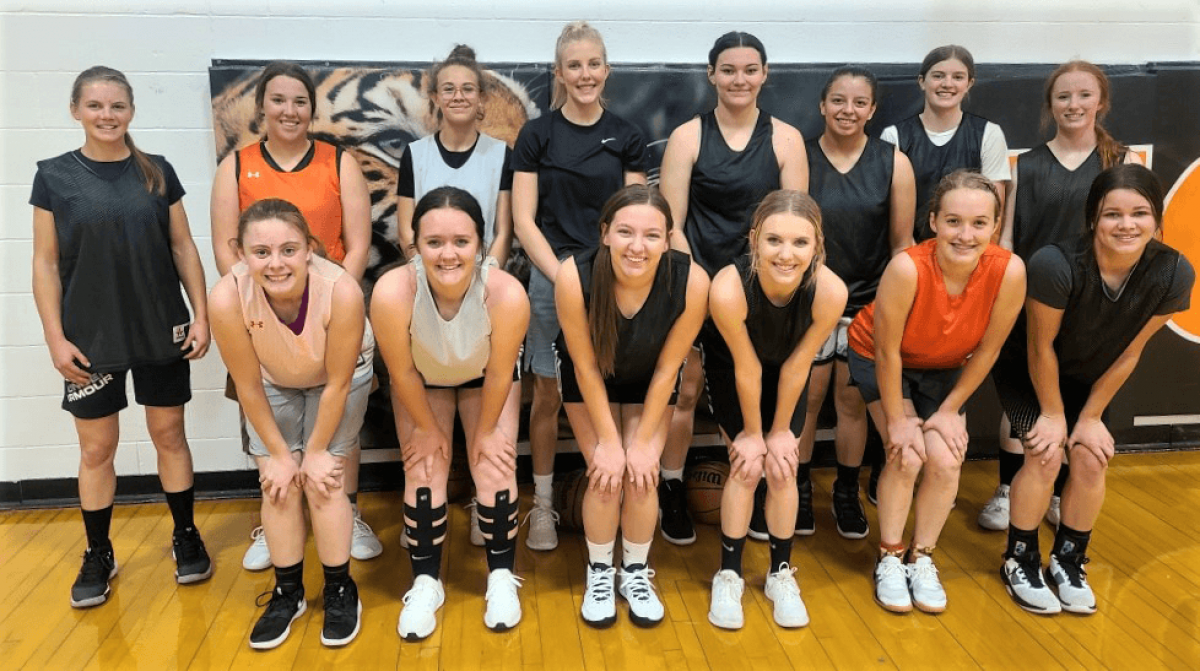 Jason Muth has been around basketball his entire life first as a great player at Swink in the early 2000s, as a referee and for many years in various capacities as a coach in junior high. He now steps to the reins at the high school varsity level and will head up the Cheyenne Wells Lady Tigers this year.

The Tigers had a tough year last year during a shortened covid season as they went 1-13 on the season and were last in the High Plains conference with a 1-4 record.

But the good news is they return 7 players from last years’ very young team, including 2 seniors and 2 juniors. They also welcome 7 new players to the team including 5 freshmen and 2 sophomores that moved into the district.

Muth will be looking for leadership from the two seniors, both post players, in Sydney Dickey and Erin Minton. “Sydney is battle tested. She is a leader in every sense of the word and one of our main threats on offense. She is incredibly coachable and plays with a great attitude. And Erin is the player that’s not afraid to do the hard work under the basket. She holds her ground and will play an important role in rebounding.”

The two juniors are both guards and include Kassadee Dickey and Ella Weed. Muth says, “Our two junior guards, Kassadee and Ella, are players that use their brains to play the game. They know where they need to be, and they can help their teammates get to where they need to be too. They play with great hustle and have a lot of varsity experience. Their positive attitudes are key to the team as well.”

Muth is also very impressed with a couple of sophomores who are extremely athletic and will just need to figure out the game as they become a more intricate part of the program.

Shaylee Scheler, who qualified for the state track meet in the hurdles last May as a freshman, is a guard. Muth says she’s the ultimate competitor. “She’s quick and plays with the type of heart that can inspire her teammates to do the same.”

Izzy Trevino-Lopez will play the post position and is, “One of our more versatile players and also plays with a lot of heart. She could be a swing player that helps us out up top and under the basket.”

Muth is extremely excited about the upcoming season and feels after last year’s nightmare the girls are ready to get going, “We have a great mixture of experienced upperclassmen and younger ladies ready to contribute. These girls faced tremendous adversity last year on and off the court and they have grown from those experiences. They had a strong volleyball season and I believe they will continue to show their growth this basketball season.”

Muth also understands that it will take the girls some time to figure each other out as well as a new system, the third in as many years.

And finally, Muth and his team knows what it’s like to finish in the basement of a tough conference such as the High Plains league. “The Hi-Plains League is historically one of the toughest in the state and that trend will continue this year. Every team in the league has the potential to be a threat on any given night.”

Cheyenne Wells will play the bulk of their pre-holiday season on the road. They start things out at Idalia on Friday, December 3rd. They then travel to Bethune on Tuesday, Dec. 7th. That same week they will have the only home game they’ll enjoy before next year when they welcome Kim/Branson on a rare Thursday, December 9. Their final week of play before the holidays will be at South Baca and then Genoa-Hugo.

But whatever happens, the team’s overall outlook for this season is to learn to love the game of basketball, “I told the players and parents that my overall goal as a coach is to foster a love for the game. If these ladies play for the love of the game, then we are headed in the right direction.”