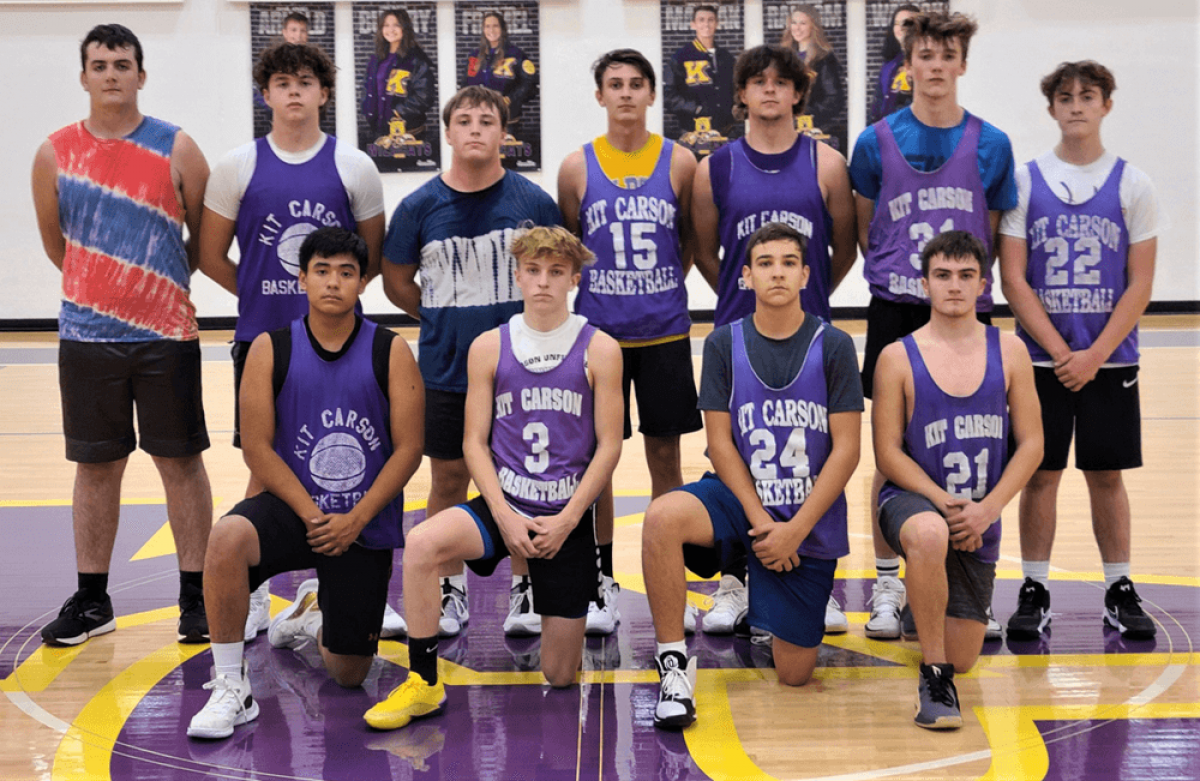 Kit Carson Will be Much Improved this Year

The Kit Carson Boys Basketball program struggled last year with a 3-10 overall season record and an 0-5 conference record during the shortened Covid season. They were very young with only one senior on the team.

This year they are bigger, faster and stronger after a year in the weight room and the fact that they paid their dues a year ago will be a benefit now.

Fourth year head coach Damon Dechant will look to two seniors and a handful of juniors who understand the system well and who are ready to play.

The seniors are Brett Mayhan at the forward and guard Danial Arnold. Dechant says, “Brett and Dan will provide the leadership and experience for the team. Danial is one of the best point guards around, and Brett is an exceptional athlete who will play every position on the floor.”

The four juniors include twins Paul and Alex Mitchek, both forward, guard Tanner Conaway and forward Alex Arroyo. “Paul Mitchek is a strong, athletic player who we expect to be a top rebounder, scorer, and defender. Alex Mitchek and Tanner Conaway are two guys we will need to step up as perimeter defenders and outside shot makers.”

There are also two sophomores who had a large amount of court time a year ago including Keaton Marriott at the guard spot and Rowdy Koch at center. “Keaton Marriott will bring speed and hustle to the team and is also someone we will look to for perimeter defense. Rowdy Koch and Alex Arroyo are two kids we are looking to bring a physical presence on the inside. Both of them play extremely hard and will fit perfectly into what we want to do.”

Finally, Dechant will need to utilize the services of 3 freshmen who were successful in junior high and now must step up to the next level. They include Josiah Irwin at the forward, Gunner Randel at forward and Brennan Framel at forward.

Dechant is banking on having the size advantage over most other teams but knows his kids will have to continue to improve on their shooting, rebounding and defensive skills in order to successfully play against a very tough High Plains league, “Our entire league is full of quality teams. All of which are capable of making noise at the state level. It is probably as deep as it’s been in a long time.”

The Wildcats start their 2021-22 campaign at home on Friday, December 10 when they host a traditional 2A powerhouse in Holly. On Saturday, December 11 they will be on the road to Idalia to face off against a very athletic Wolves team. Finally, to wrap up the pre-season the Wildcats are looking forward to competing in the Lamar Holiday Basketball Tournament on December 16, 17 & 18. Last year the tournament was cancelled so the team is excited to get back to that electrifying environment.

As they begin the season, Dechant’s expectations for the team haven’t waivered since he took over the program four years ago, “The expectations for this team are the same as they have always been. Uphold the standard of Kit Carson Basketball. What we as coaches and members of the community expects never changes. The league is very difficult, but every goal we have is achievable. We can be as good as we want to be, but it’s going to take the same effort day in and day out.”