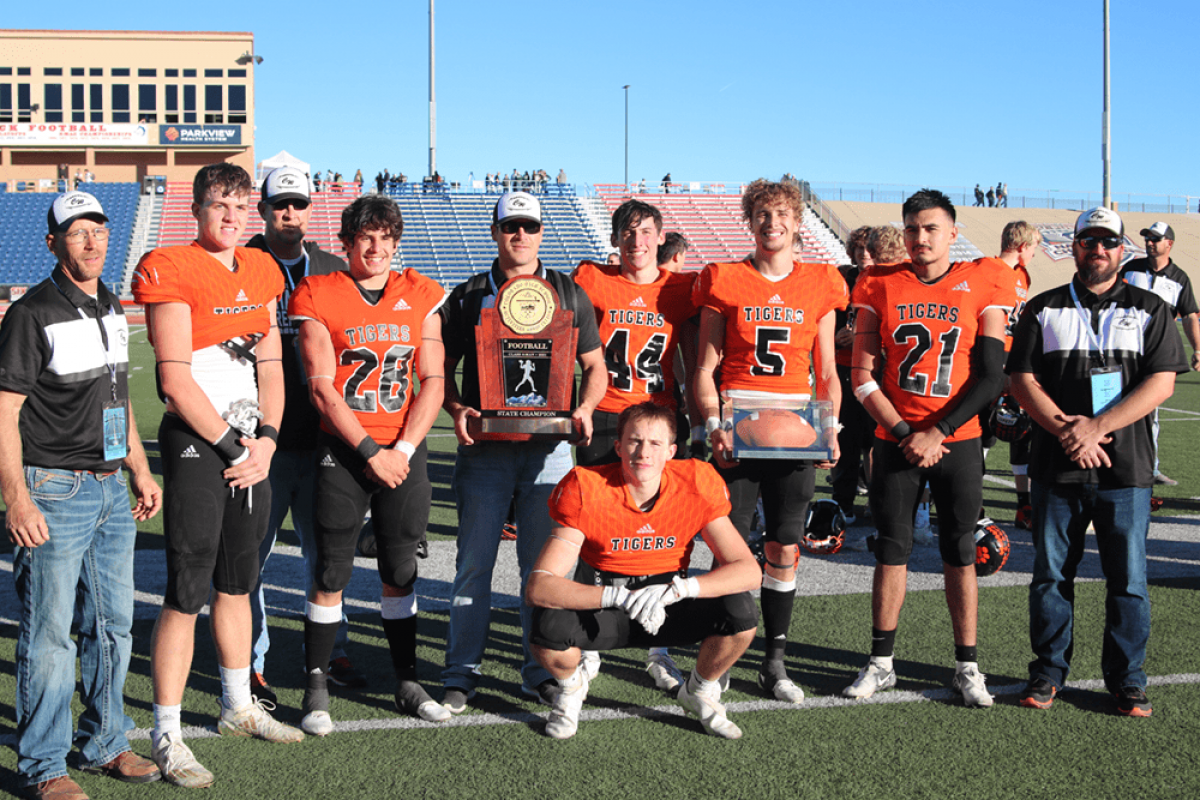 It was certainly a long time coming, but the Cheyenne Wells Tigers put everything together this year and pulled off a perfect season topping it off with a 62-21 state championship win over their nemesis the Stratton Eagles on Saturday at the Thunderbowl located on the CSU-Pueblo campus.

The state champions were ready to go at the very start of the game. They sent a message early they were not going to be eliminated by this opponent who had ended their season in the past two years.

Cheyenne Wells jumped out to a 24-0 lead after the first quarter and that hole was one the Stratton group, despite their experience, could not dig out of.

It took both teams a bit to get a feel for the game as Cheyenne Wells had an early touchdown called back on a penalty and then threw an interception on the next play. But Stratton couldn’t do any better and went four-in-and-out on their first possession.

On their next possession the Tigers proved why they were state champions as their blocking, particularly on the run game, was superb all day. Starting on their own 29-yard line seniors Cade Mitchek and Evan Worley carried for long yardage. Mitchek finally punched it in from 12 yards out at the 5:17 mark of the first period to strike first. Kicker Jesse Harlow hit the PAT kick dead square for the 8-0 lead.

Stratton then took their second possession on their own 18-yard line, but on second down Tiger senior Blake Gilmore intercepted a Charlie Tagtmeyer pass on the Stratton 20-yard line as Worley was pressuring the QB.

The Tigers then got down to the Stratton 8-yard line on a nice center-eligible pass play to Wyatt Ball. Then on the second play from scrimmage Worley punched it in on an 8-yard touchdown run with 3:35 on the clock. The Harlow kick was good again and the Tigers jumped out to a 16-0 lead.

On Stratton’s next possession the Tigers again held strong and forced them to punt. The kick was short, and the Tigers got the ball back on the Stratton 37-yard line. Mitchek ran it in on a beautiful carry, but the touchdown was called back. Rogelio Rangel then made a strong run to the 1-yard line and Mitchek finished it off with 1:23 left in the first quarter. Harlow, again, hit the uprights and CW had the 24-0 lead.

But the Eagles came back into game at the very start of the second period on a Tagtmeyer to Cylar Notter touchdown pass play from 24 yards out. The Wedel kick was no good, but Stratton sent a clear message they weren’t finished just yet.

The Tigers came back strong as Ty Scheler hit Mitchek on a 34-yard pass play taking the ball down to the Eagles’ 3-yard line. But a fumble on the next play allowed Stratton speedster Alex Cruz to recover it on his own 6-yard line to hold off the Tigers’ onslaught.

The Tigers held Stratton once again and took the ball at mid-field moving steadily toward the Stratton goal line. On 3rd and goal Scheler hit Mitchek on a 28-yard pass play down to the 2-yard line. Head coach Myles Smith quickly called a time out with just .02 left in the first half in order to set up their final play. Mitchek carried the ball the 2-yards with Cruz on his back for another touchdown. Harlow’s kick was good, and the Tigers went into the locker room with a 32-6 lead.

Unfortunately, on that final play with Mitchek carrying, Cylar Notter for Stratton was injured and would not return in the second half. But the Eagles adjusted well at intermission and continued to compete throughout the final half.

Stratton took the first possession of the second half but could do nothing with it when Dillon Ball recovered a fumble on the Stratton 10-yard line. Gilmore quickly lit up the scoreboard again as he hit Mitchek from 10 yards out on the first play from scrimmage. Harlow, again, stayed perfect extending the lead to 40-6.

From there on out, Smith commandeered a group of ball players who took care of the ball on the ground while eating up the clock. They threatened again on the Stratton 11, but the Eagles held them off.

On Stratton’s next possession Cruz hit Tagtmeyer on an impressive 66-yard touchdown pass play. Wedel’s kick was good, but the Eagles still trailed 40-14 with 3:35 left in the third quarter.

Cheyenne Wells started on their own 28-yard line on their next possession and moved quickly down the field when Wyatt Ball, again, caught a pass for a long play down to the Stratton 20-yard line. Mitchek then carried for the touchdown, this time from 10 yards out with 1:16 in the third. The Harlow kick was again perfect, and the Tigers enjoyed a 48-14 lead.

Early in the final period, Gilmore intercepted a Stratton pass on the Cheyenne Wells 20-yard line after Stratton had successfully moved the ball into scoring range. Mitchek then took the ball 44 yards to the end zone as he followed the road plowed by Gilmore. The Harlow kick was good again and the Tigers enjoyed a comfortable 56-14 lead with 7:44 remaining.

After Stratton went four-in-and-out on their next possession, the Tigers took over on the 16-yard line. Again, Gilmore plowed the road and Worley ran the ball in at the 5:54 mark. Finally, Harlow missed a PAT leaving the score at 62-14.

This deficit struck up the mercy rule which requires the clock to continually run except for time outs and injuries. At that point, the Eagles threw the white flag bringing in their young guys. Coach Smith followed suit and for the next five minutes the crowd got a look at the future for both teams.

With 2:34 left in the game, and the Tigers well in control, Stratton’s Riley Shein, a sophomore who is a big solid kid, broke away for a 20-yard touchdown run leaving he final score at 62-21.

The six seniors for Cheyenne Wells put on quite a show as their defense and offense was just too dominate for any 6-man team in Colorado to handle. They include Mitchek, Worley, Kody Ryser, Gilmore, Rangel, Wyatt Ball and Dillon Ball. This was an unusual group of athletes all in the same class.

Scheler, just a junior, had a tremendous day on both sides of the ball. He was 5-for- 8 attempts for 71 yards from the air, and also was on the other end of the pass for one reception for 13 yards. Scheler chalked up 84 yards in total. He would also lead the team with 9 tackles on the day.

Mitchek scored 6 touchdowns including five on the ground and another from the air. He would be a work horse for Cheyenne Wells with 26 carries for 219 yards. Mitchek also caught 3 passes for 61 yards. The senior Tiger was truly remarkable on Friday being named the MVP in the state championship game.

Gilmore was 3-for-6 for 27 yards and a touchdown from the air.

Worley was a tough customer to deal with as he carried 6 times for 65 yards and 2 touchdowns and also caught 3 passes for 10 yards.

Defensively, the Tigers were tough as Scheler and Worley each had 9 tackles. Gilmore had 6 tackles and 2 interceptions, while Rangel also added 6 tackles and recovered a fumble. Dillon Ball was a very strong defensive player with 5 tackles, one fumble recovery and 1 sack.

And then there was Harlow who went an amazing 7-for-8 PAT kicks bringing 14 points to the Tiger tally.

Smith knows that this season was a charmed one as his seniors bought into the system that they had been in for the past four years. He may never have another group like the one that won Cheyenne Wells’ first-ever football state championship. But Smith is a builder and his young guys, a good group of freshmen and sophomores—along with players like Harlow and Scheler—will be no doubt be motivated to get in the weight room and carry on the tradition.