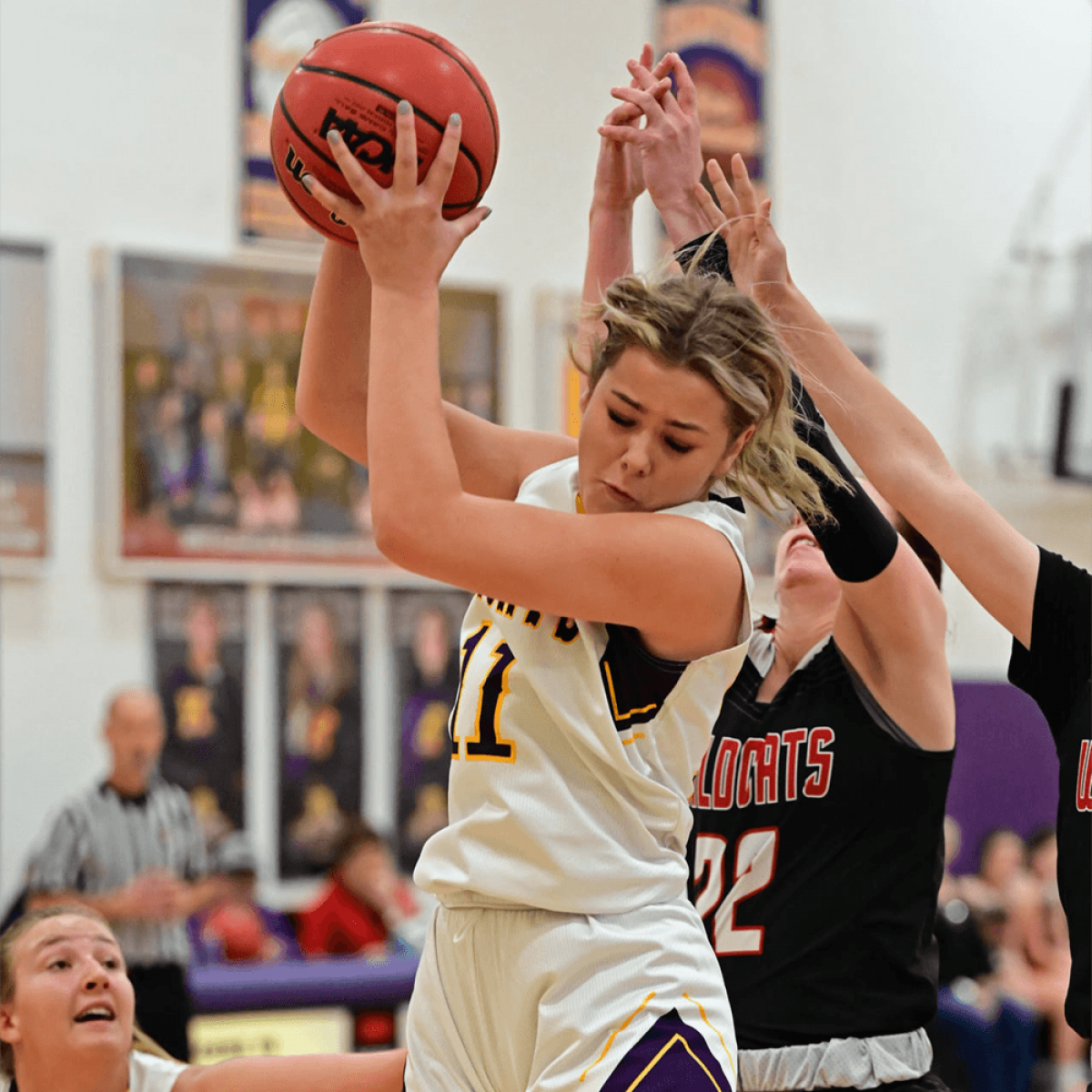 Kenzie Waggoner gets position on the boards and grabs the rebound.

No. 9 Kit Carson Girls Sweep on First Weekend of Hoops 2021

The storied Kit Carson Lady Wildcats began their 2021-22 campaign by winning two games over the weekend including a strong win over 2A Holly, 63-37, and then squeaking by a very athletic Idalia team on Saturday, 32-31.

Head coach Sara Crawford is in her 18th year at the helm for the Lady Wildcats and had plenty to say about the first weekend of ball for her team, “After nothing but practice for a few weeks, opening weekend is always exciting but also a bit nerve racking. We graduated a very well-versed senior class last year and I always wonder who will step up and take the lead. Without a doubt, Stephanie Framel stepped into the leader shoes scoring in double figures both nights. But first game jitters were definitely an obstacle we had to overcome. For a while I was nervous that we’d have more turnovers than points, but eventually the girls were able to compose themselves and really had some promising moments.”

Kit Carson has a 2-0 record going into the final weekend of play before the holiday break. Based on their strong start they are seeded #2 in this weekend’s much-anticipated Lamar Holiday Basketball Tournament that features girls’ teams from Kit Carson, Eads, McClave, Wiley, Granada, Holly, Springfield and Walsh. Kit Carson will face off against #7 Eads (0-4) in the first game of the tournament on Thursday at 1:30 pm.

On Friday night the KC Wildcats hosted fellow Wildcats from Holly in their home opener. Both teams started evenly, with the score standing at 16-15 in favor of Kit Carson with 5:18 remaining and at 19-18 in favor of Holly with 1:47 remaining in the second quarter. The first half ended with a four-point lead for Kit Carson. Holly stayed close, trailing 34-31 with 2:38 left in the third quarter, but Kit Carson rolled through the end of the quarter, and led 39-31 heading into the final frame. Holly’s hopes vanished in the fourth, as Kit Carson outscored them 24-6 to take the game by a final score of 63-37.

Senior Stephanie Framel scored 23 points to lead the way for Kit Carson. Holly just didn’t have an answer to the size represented by Framel and a couple of other girls on the Kit Carson team. Senior guard Faye Buttry hit for 14 points including a couple of treys. Payge Booker-Rady added 11 more and was particularly strong in the final quarter hitting for 9 points.

For Holly, junior guard Nadia Cerros took her team upon her shoulders scoring 21 of the team’s 37 points. She would have three long balls in the contest and go 4-for-5 from the charity line.

The next night in Idalia the Lady Wolves gave Kit Carson all they could handle and then some as their quickness and strong man defense caused the Wildcats issues throughout the night.

Crawford commented, “We were prepared for a battle with Idalia and that’s exactly what we got! They’ve got a few really nice shooters and one that can score from about anywhere in the front court. They definitely put our defensive skills to the test Our quickness as well as size sure came in handy as guards Torrie Randel, Buttry and Lindsey Mayhan took on the brunt of the Wolves defense onslaught.”

At the start of the final period against Idalia the two teams were knotted at 23 apiece. Johnson put in an impressive hook post bucket to gain the rare lead 25-23 with 6:00 minutes remaining. Randel hit a key three ball with the score tied 27-27 with 4:17 left in the game. By the 2:30 mark the Cats had gained a three-point lead with Idalia challenging. However, the Cats had the lead advantage, and the Wolves would have to foul in order to stop the clock. Framel took the ball in her hands and managed to make 4-of-7 free throws down the stretch. Idalia did get a final shot off trailing by a single point, but it bounced away out of bounds.

Randel scored 12 points, four long balls, in the contest to lead the Cats. Framel was on the free throw line 11 times and scored 10 points.

It’s now time for the Lamar Holiday Tournament, a tournament where Crawford and the Wildcat fan base have enjoyed a lot of success. Crawford is ready and hopes her Wildcats are ready as well saying, “All last week we battled sickness, so I’m praying for a healthy Holiday Basketball Tournament.”