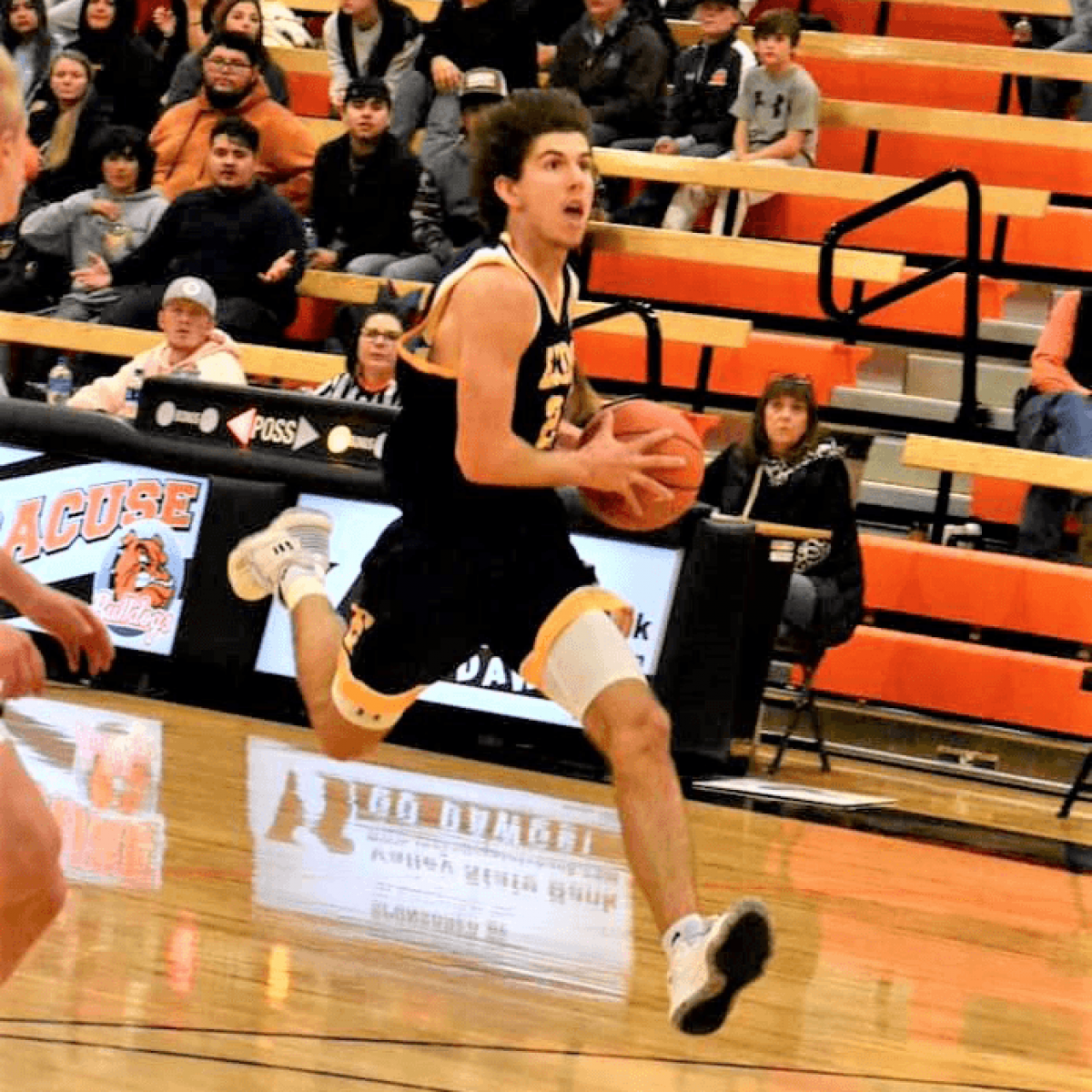 Eads sophomore Porter Spady attacks the bucket on a break-away lay up during preps basketball action against Syracuse on Friday, Dec. 10. Spady had 19 points and 9 steals in the contest.

The Eads boys’ team started off strong in the first weekend of the season with a win over Hi-Plains, but then the Kansas Border Wars proved to be too much for the Eagles as they lost all three games over the week. They first lost to a strong Greeley County team, 75-34, on Tuesday. The Friday night game in Syracuse was a good one, but the Eagles ultimately lost, 66-49. Finally, on Saturday, the Eagles were missing their top scorer losing 57-13 to Elkhart.

The Eagles go into the Lamar Holiday Tournament with a 1-3 record as the #5 seeded team and will take on McClave (1-2, #4 seed) who also competed in the Border Wars over the past week. This game is scheduled for the nightcap on Thursday at 8:30pm.

Eads started slowly on Tuesday scoring just six points in the first quarter in Tribune. They would have their best quarter in the second with 14 points as sophomores Porter Spady and Brentley Lening led the way. However, the scoring slowed to a snail’s pace in the second half as the Jackrabbits ran away with the game.

On Friday, Eads started slowly again and only got a three ball from Wilson and Lening in the first quarter. They improved as the game continued scoring 18 points in the final quarter with Kadan Dunlap, Cade McDowell and Stockton Mitchek all hitting a three-ball.

Spady had a very strong game with 19 points and 9 steals. The sophomore was 9-for-11 from the free throw line, and also added 4 rebounds. The freshman Mitchek added 10 points and McDowell chipped in 9 more.

The final game of the season revealed how tough it can be when your point guard and play maker is absent as Spady was on Saturday. The remaining Eagles could get nothing going against Elkhart scoring just a single free throw by McDowell in the first quarter. Only McDowell was able to find the bucket with much consistency throughout the game as he hit a three and a couple of jumpers.

McDowell managed 8 of the 13 points scored by the Eagles with Wilson adding 5 points, including a three ball in the final quarter. This may have been one of the lowest scores the Eads boys’ program has produced in many years.

First year head coach Weston Meardon hopes his Eads boys will be ready to bring up their level of play significantly as they now enter into one of the traditionally most competitive pre-season tournaments in the state.