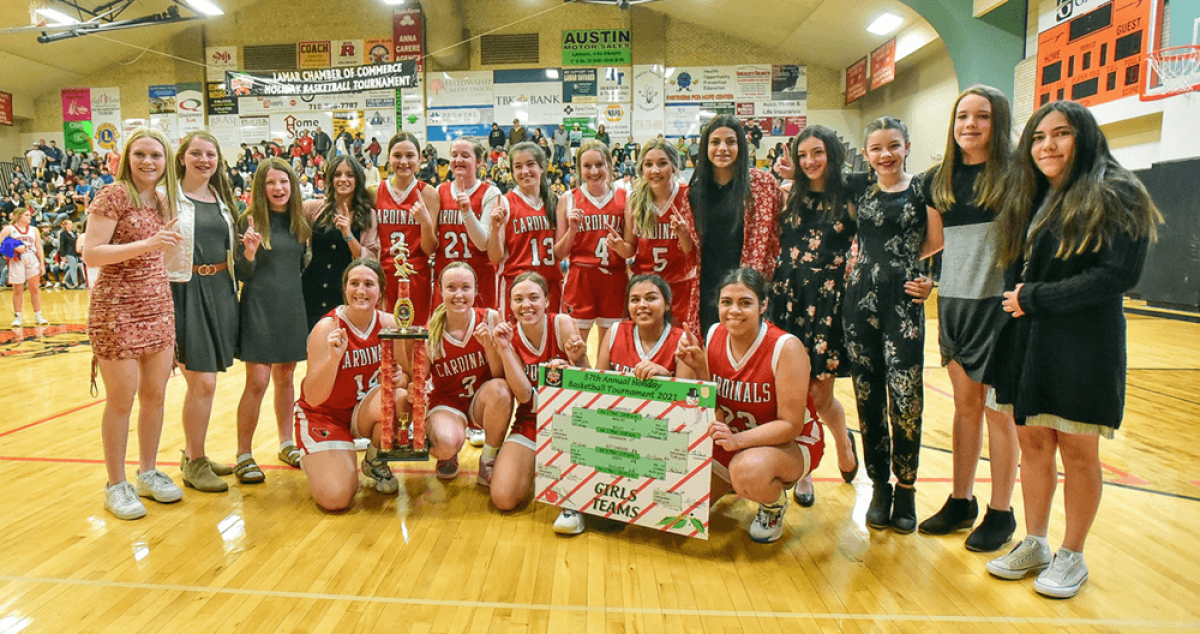 It’s been since 2009 since the overpowering and feared full-court, man-to-man, in your face McClave defense that won many championships throughout those years made its presence onto the court at the Lamar Holiday Basketball Tournament, and it has been just as many years since Dick Peecher was on the bench for the McClave girls urging them to put every ounce of energy they could find into their team defense. That kind of smothering defense worked then and over the weekend it worked like a charm again as the Lady Cards defeated Springfield, 54-29, in the championship contest winning their first Lamar HBT crown since Peecher walked away in 2009.

But there is one small, but mighty difference in the McClave teams of old and this new and improved 2021 version, the father is now the mentor on the bench, and the reins are firmly controlled by Peecher’s oldest daughter, Brianne Howe. Like father, like daughter, so it would seem.

The smothering defense for McClave started out right away on Thursday as they faced off with Holly in the quarterfinals round. McClave would outscore Holly in every quarter scoring a whopping 20 and 23 points in the second and third stanzas. McClave ran away with this one early as the defense held the Wildcats from Holly down to only five and six points per quarter. The final score was 62-21.

For Holly Nadia Cerros had 7 points and Aureonna Diaz used a three-ball to score 4.

McClave was led by their seniors as Maggie Chase and Anna Beckett scored 16 and 13 points respectively. McKayla Kiniston added 11 and Kennedy Vallejos chipped in 8. Kiniston, Chase (2) and Beckett (2) were the hot hitters from the outside.

They say, “Defense wins championships,” and it was never more evident than in the girls’ semifinals game on Friday night as the much-anticipated match up between Kit Carson and McClave was on the schedule.

McClave came out in a full court, man pressure defense that gave the guards from Kit Carson fits as it forced them to hurry and to often times get out of control.

Long time Kit Carson Coach Sara Crawford commented on the game, “Our biggest hurdle has no doubt been in building up the guard position. Turnovers have been our number one obstacle with confidence and lack of experience being the culprit. However, with every game that has improved. Without a doubt, the McClave game was our most challenging of the tournament. The physicality was brutal, however so good for us. I believe that loss will only make us better.”

And the game was physical just like the Peechers preach it. In fact, if one looks at the shooting percentages and rebounding performance, Kit Carson out-performed the Cardinals in all categories. There was just two categories that stand out like a neon sign. The Cards had 17 steals while the Wildcats only got 2 steals. Even more revealing, the Wildcats turned the ball over 24 times. That stat is the story of the game and it’s the story of what made McClave so successful over the weekend.

Kit Carson went on to defeat Granada in the third place game on Saturday, 41-28.

Granada was a side story of the tournament as the girls’ program had not qualified for the night session, ie won the first round game, for more years. They have a young, but talented group and their coaching staff is doing a good job rebuilding the program. Granada defeated Wiley in the first round, 47-41. They then lost to Springfield, 62-41, in the semifinals game.

The championship game between McClave and Springfield on Saturday night was not much of a contest as the Cards’ smothering defense in the back court allowed for few buckets down low where the Longhorns like to play.

McClave took the lead in the first quarter 11-4 as the Springfield guards committed 24 turnovers throughout the night. By halftime it was 25-16 as Kiniston, who was a terror on the defensive end, hit a 3-ball with 2:08 left in the first half.

Springfield does have some good athletes and they battled, but the game got blown open in the third period as Chase hit back-to-back three balls and Weber followed with a long deuce to put the nail in the coffin.

The story of the game was the 24 turnovers committed by Springfield. Chase was named the MVP of the championship game as she blew the Longhorns out of the game in the second half using dagger-like precision hitting for 4 three-balls.

This was the first Lamar HBT championship for the Lady Cards since 2009. That was the last time the program rattled off 8 consecutive championships under the tutelage of Peecher.

Dick Peecher said after the game, “The girls are bought into this defensive system. They are a fun group to get to work with and they have the moxy and confidence in our defense that translates into points on the other end.”

This was Howe’s first Lamar HBT championship as a coach. Howe said in an interview with KVAY’s Cory Allen Forgue after the game, “This is just fun. We have definitely tried to put all our efforts into our defense. I’m so glad my dad is here for us as a mentor, and I love having him with us on the bench and in the locker room. He’s such a great motivational speaker and he brings extensive defensive tools to our program.”

Howe then went over each and every one of her players listing their contributions to the team. She finished with her six seniors saying, “It was great that they finally got this championship.”