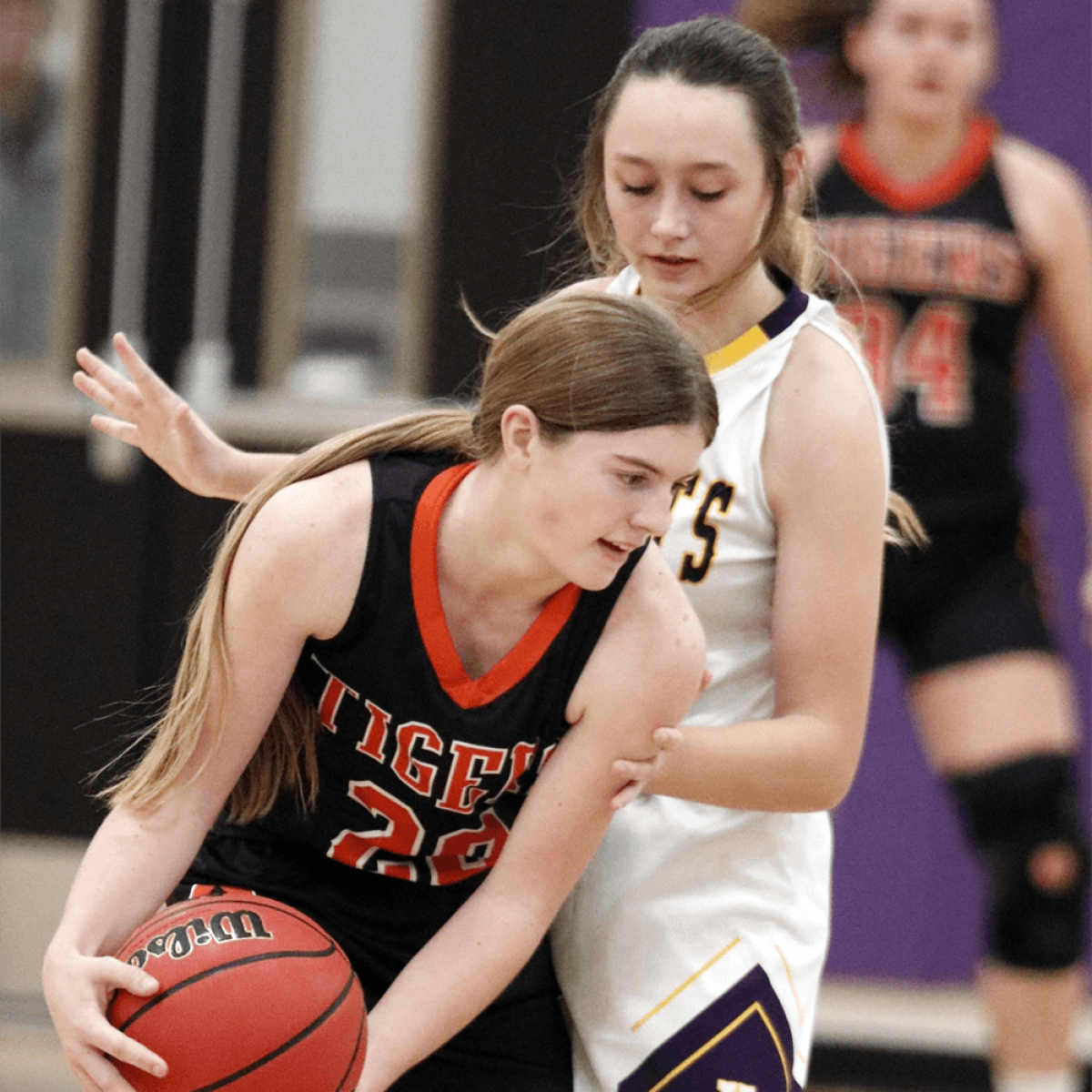 The guards go at it as Cheyenne Wells freshman Paige Ryser tries to drive on the strong defense of Kit Carson sophomore Lindsey Mahan.

It’s been a long cold spell for the Cheyenne Wells Tigers girls’ basketball program as they, for many years, have been athletic but could not finish in the post season. This year, it looks like a new team as they are confident with their senior leadership, and they have a strong freshman playing exceedingly well. They would grab two impressive wins, on the road no less, in the opening weekend back from the holiday break including a barnburner District 2 win over a strong Kit Carson group, 33-31 on Friday night. They then traveled clear down south to Springfield to take on the Lamar Holiday Basketball Tournament runner-up team and defeated them in another strong performance, 52-35.

Cheyenne Wells is now 6-1 on their early season and grabbed a crucial District 2 win as well.

The Kit Carson crew is a good team, but they ran into turnover issues over the weekend. They actually had the lead over Cheyenne Wells until a dismal third quarter saw them only score 1 point. In comparison, as well, was the turnover stat that had the Lady Wildcats with 28 turnovers against the tough Tiger defense, while the neighbors to the east only had 15 turnovers.

But the next night in Fleming, long-time Wildcat coach Sara Crawford was exceedingly proud of how her team played as they were strong against yet another full court defensive powerhouse at Fleming. They would lose the Fleming game in a tight 45-40 loss.

Crawford remains positive about her girls’ improvements despite not getting a check in the W column, “The first half of our game with CW was much better than the second half, as we were able to get to the free throw line making 5 of 7 and were also able to connect on a few field goals. In the second half, things just didn’t go our way. Only scoring 1 point in the third quarter was a back breaker and I was very disappointed with our lack of hustle on defense. We also went extremely cold at the line only hitting 1 for 5. I give credit to Cheyenne Wells for having a good defensive game plan. After some good ole soul searching, Saturday’s game with Fleming was much different. I was extremely proud of our girls for the courage they displayed facing a very aggressive defense. We were able to break their press and handle the half-court defense too. Also, our defense was more intentional and focused.”

For Kit Carson it would by Tess Johnson who led the way with 8 points and 9 rebounds. Faye Buttry added 7 points, including 1 three-ball. Kenzie Waggoner added 4 points and 5 rebounds. Lindsey Mahan, a developing and athletic guard for Kit Carson, added 4 rebounds, 3 assists and 4 steals.

In the Cheyenne Wells game, it was freshman Paige Ryser who is making some noise for Cheyenne Wells as she scored 21 points, including four 3-balls. She would also grab 6 boards and had 2 assists. Seniors Sydney Dickey and Erin Minton battled on the boards and was key in the strong defensive pressure the Lady Tigers used. Dickey scored 7 points, pulled down 5 rebounds, and had 4 steals. Minton was a big inside presence with 7 boards on the night.

First year head coach Jason Muth was very satisfied about the results in the weekend, as well he should be, as his team took down two powerhouses in southeastern Colorado. Muth would comment, “I don’t think it’s possible to be more proud of the girls than I am. From the beginning I believed that the missing ingredient for these ladies was confidence and now that is taking root and growing game by game. To have successfully completed our stretch of six road games to start the season and get a big win over our first district opponent is huge.” Muth went on to emphasize, “Working our way back from a doubledigit deficit on the road against a good Kit Carson team really was an important step for our team.”

On Saturday night Cheyenne Wells’ defense bothered Springfield and the Lady Tigers got another great game out of the freshman Ryser who scored 15 points and had 4 steals. Dickey was also strong in Springfield with 10 points, 5 boards, 5 assists and 3 steals to her credit. Minton added 7 points. The underclassmen also contributed greatly in Springfield with Shaylee Scheler, Ella Weed and Izy Trevino-Lopez all contributing 6 points apiece.

Kit Carson had a very strong game in Fleming taking on one of the top 1A teams in the state. Stephanie Framel poured in 13 points, including 2 three-balls. Tess Johnson added 5 points, 10 boards and 3 assists. Faye Buttry added 8 points from the guard spot, and Payge Booker-Rady used her size to put in 5 points.

Kit Carson will be home on Friday, January 14 as they welcome a strong conference team in Wiley. They are then on the road on Saturday heading to play against Hi-Plains.

The Lady Tigers are finally home for two non-conference match-ups with Kansas teams as they’ll take on Wheatland-Grinnell on Friday and Weskan on Saturday.