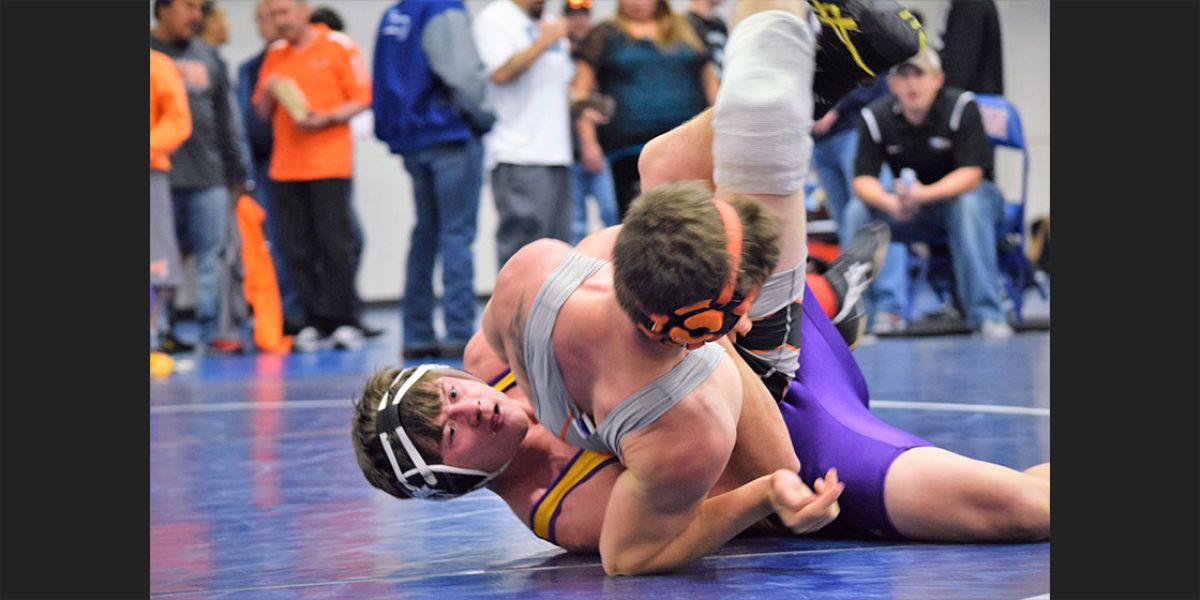 No Gold was found in the Akron gym this past weekend for the Eagles but the Eads wrestlers did represent their school winning two silver and a bronze.  Eads brings to the mat one freshman, Ben Splitter, from Plainview; one junior, Trevor Randel; and two seniors, Chance Fowler and Rhett Uhland.  Randel, Fowler and Uhland all bring valuable state experience to the equation and we look forward to watching another exciting year.  Splitter, although he has no real wrestling experience, has a positive attitude and hard work ethics that should take him a long way in his freshman year.

The first tournament of the year usually finds the wrestlers a little heavy coming off their football season so it might take a few weeks to get everyone down to the goal weight they work for to finish off their season.
Ben Splitter, a light 120 pounder, suffered two losses but also got to work through the first tournament nerves for the next tournament.  Camden Goss, from Sedgwick-County Fleming, won by pin in 0:28 and Edgar Duran, from Platte Valley, won by pin in 1:30.

Trevor Randel, 152 pounds, was wrestling in one of the bigger brackets of the day.  He proved he was one of the best, going all the way to the championship with a major decision victory over Jesse McDonald from Brush, 15-3; a first period pin over Mason Koehn from Eaton in 0:57; another pin in the Semis against Loren Johnston from Greeley Central in 4:44.  The championship match was a battle with Zach Waite from Platte Valley with the lead going back and forth several times and going into the third period it was a one point advantage held by Waite.  The last two minutes were nail biters and with a missed locked hands violation by Waite, he was awarded back points and Randel just ran out of time to get back the extra two points to tie things up.  Randel would finish in 2nd place with the 10-12 decision loss.

Chance Fowler, 170 pounds, had a tough day on the mat but he successfully overcame Max Quint, from Merino, with a pin in 5:42; he pounded Jacob Pfannebecker, from Platte Valley, for 4:40 before he finished the match with a pin; and Evan States, from Byers, only lasted 1:53 as the ref slapped the mat to declare States pinned.  His championship match was against a strong senior from Stratton, Marshall Hornung.  The match went the complete six minutes but Fowler fell short with the 6-13 decision loss. It will be an exciting match every time these two meet up and outcome might be different the next matchup.

At 182 pounds, Rhett Uhland pulled out a squeaker for his first match of the 2016 season against Dawson Worley from Cheyenne Wells with a 3-1 decision but next met his match against a big 182 pounder in Braedy Sturdevant from Eaton losing in a 10-2 major decision. Not missing a beat, Uhland pinned Arsham Ghaffarvand from University in 1:44; pinned Cody Jordan from Eaton in 3:26; and pinned Nick Griego from John Mall in 0:35.  Uhland fell into the 5 match limit and was unable to wrestle for the 3rd and 4th place match forcing him to settle for 4th place.

After another long and hard week of practice and getting closer to their destination in weight, the Eagles will be wrestling this next weekend in Limon which is an even bigger tournament than Akron so it is a given that there will be stiff competition.  Go Eagles!