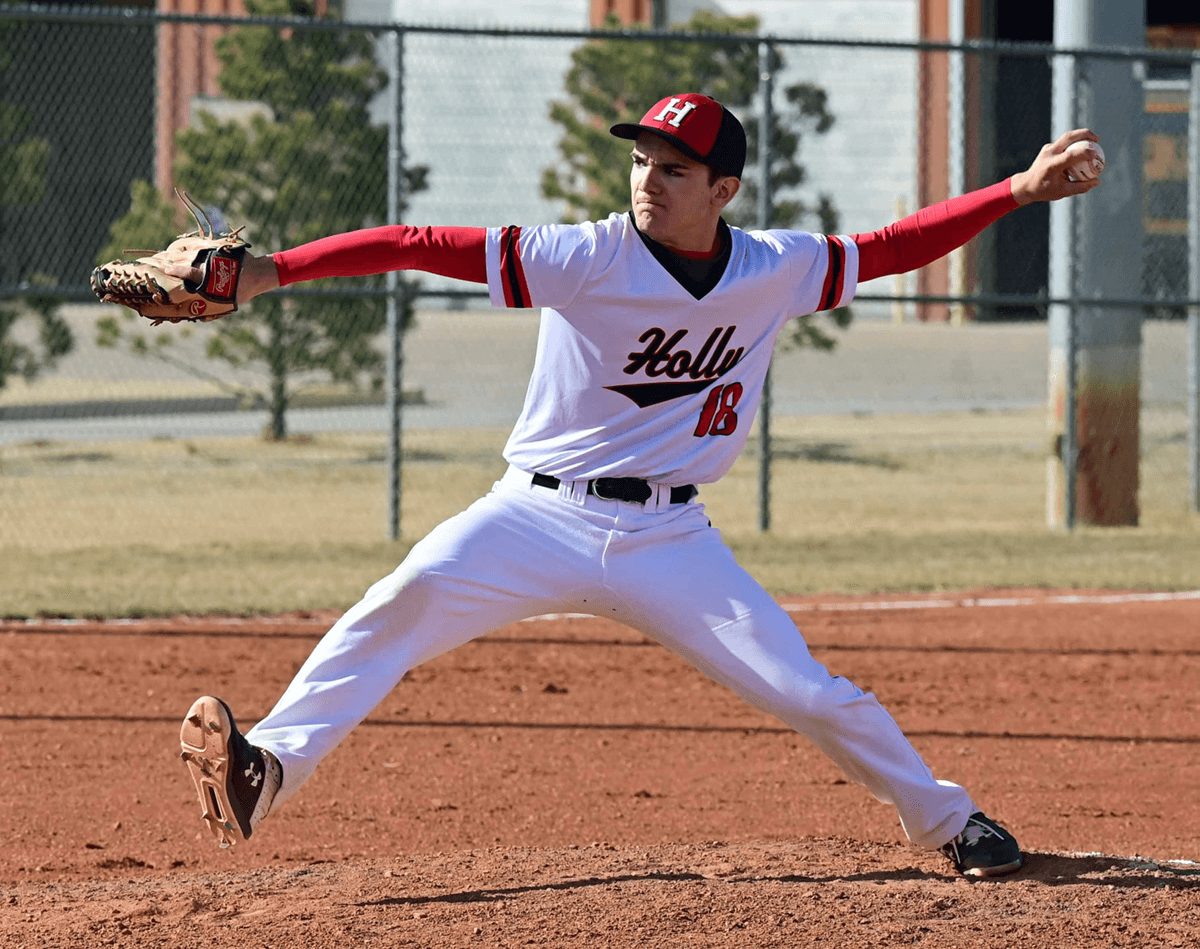 Dakota Eaton has worked his way into the ace position in the Wildcat bullpen after two strong performances over the past week where Holly swept Granada and Stratton.

Over the past week area teams have been busy on the baseball diamond going up against each other and other teams within the conference. Holly advanced their overall record to 10-2 and a perfect conference record (7-0) with four wins. Granada, after suffering a sweep from Holly, did their own housekeeping grabbing two wins over La Veta on Friday. Finally, the County Line Rivals, consisting of players from McClave and Wiley, split with Rocky Ford on Friday, as well.

The defending state champions from a year ago enjoyed a very successful week as they swept Granada on Tuesday in scores of 7-2 and 8-3, and then on Friday did some more house cleaning against Stratton defeating the Eagles in scores of 9-2 and 10-0. All four games were conference contests advancing Holly’s conference record to 7-0.

In the first game against Granada both teams’ defenses were hard at work as their aces worked from the hill through two scoreless innings. Finally, Holly broke things open a bit scoring 2 runs in the bottom of the third. They then grabbed the victory in the bottom of the fourth inning scoring 5 more runs.

Holly senior ace Dakota Eaton went four innings allowing no hits and no runs by Granada. The righty walked 4 Bobcats and fanned 8 more. Sophomore Andre Salgado came in relief from the bullpen to finish off the game working through 1 inning and giving up 1 hit, 2 runs, 2 walks and struck out 1 Bobcat.

Granada senior Dominic Coleman took the loss on the hill as he went the distance in four innings of work giving up 5 hits and 7 runs, walking 2 batters and striking out 5.

Granada left 11 birdies on the pond as the Holly pitchers managed to work out of a few tough spots.

Offensively for Holly freshman Truman King went 2-for-2 and had a stolen base. Junior Roque Torres was 1-for-2, scored 1 run, added 2 RBIs and stole one base. Eaton was 2-for-2, scored one run, and had an RBI off a triple, and committed one theft. Salgado scored a run and had 1 stolen base.

John Hainer led Granada offensively going 2-for-3 at the plate with 1 RBI and added 2 steals. Jonus Guevaro was 1-3 with a double. Maddox Coleman scored a run and stole 2 bases.

J Terrazas was the winning pitcher for the Wildcats as he lasted 4 innings, gave up 2 hits, no runs, walked one and struck out 10 batters. Freshman Devin Eaton closed the door on Granada working one inning on the bump. He gave up 2 hits and 3 runs, walking one and striking out one.

Bryan Gonzales got the nod for Granada on the mound and worked for 2 innings giving up no hits and 1 run, walked 3 batters and struck out one. Hainer came in relief and took the loss in 2 innings of work giving up 6 hits, 7 runs, 4 walks and had 1 strike out.

Holly then welcomed Stratton on Friday for a double header sweep winning 9-2 and 10-0. In the first game they began strong and kept up the offensive onslaught throughout the contest.

Holly used their senior ace on the mound as Dakota Eaton put in a complete game working 5 innings. He gave up 3 hits, 2 runs, 2 walks and struck out 10 batters.

The nightcap against Stratton was nearly a repeat as the Wildcats scored in every inning, including a six run second inning.

After losing to Holly in the league sweep on Tuesday in scores of 7-2 and 8-3, the Bobcats bounced back on Friday, April 8 and dominated the La Veta group in a doubleheader date winning both games by scores of 18-0 and 9-6.

The Bobcats are 4-3 on the season and 3-3 in the conference race.

In the first game with La Veta the Bobcats shifted the offense into high gear starting in the second inning when they scored 7 runs and then duplicated that feat by scoring 7 more in the third. The Bobcat pitchers held off the La Veta hitters never allowing a run in the contest.

Granada won the game on the hill using a pitch-by-committee approach. Senior Dominic Coleman would get the win as he worked through 2 innings giving up one hit and no runs. The righty never walked a batter and struck out 5. Brandon Gonzales came in for one inning of relief and kept the La Veta hitters completely off balance giving up no hit, no runs, no walks and struck out all 3 batters faced. John Hainer then closed out the contest in one inning of work. The big right-hander gave up one hit, no runs, two walks and had one strike out.

Offensively, the Granada contention scattered 18 hits around the field. Coleman was 2-for-2 with a double, a triple, 2 RBIs, 2 runs and 4 stolen bases. Gonzales was 3-5 with 2 doubles. and scored 3 runs, had 2 RBIs, and committed 2 steals.

The younger Coleman had a heyday on the base paths stealing 7 bases. He would go 3-for-4 with 2 RBIs off a double and scored 3 runs.

Ivan Yanez also went 3-for-4 with a double and two runs. Javier Tejeda was 1-2 with an RBI, a run and 2 stolen bases. Hainer had a double, scored 3 runs and stole 6 bases.

The nightcap was much closer, but the Bobcats used an early lead to hold onto the win. They would score all their runs in the first and second innings while La Veta threatened in the fourth inning pushing 4 runs across and behind 9-2.

Four pitchers were on the hill for Granada in this second pitch-by-committee strategy. Coleman got his second win of the day from one inning on the mound where he gave up no hits, no runs, no walks and struck out all three batters.

Luis Cano took the second inning and performed well giving up one hit, one run, 1 walk and struck out 3 batters. Gonzales took two innings and gave up 2 hits, 1 run, and walked 4 batters. He would strike out three. Finally, Jose Sanchez picked up the final inning for the Bobcats. Sanchez gave up 3 hits, 4 runs, but did not walk a single batter.

The Bobcats will now host a struggling Manzanola group for a doubleheader on Friday, April 15, starting at 10 am.

Because of the combined population in the McClave and Wiley school districts, the Rivals are playing at the 2A level, but still competing remarkably well. They currently have a 5-2 overall record and 1-1 conference record.

Jace Parker went the distance on the hill in Game 1 for the CLR getting the win by going all 6 innings. The junior would give up 4 hits, 2 runs, 2 walks and have a remarkable 13 strikeouts.

Parker held off the Meloneers early in the contest until they chalked up one in the fourth and one in the fifth. Otherwise, this high-octane group was kept off the base paths.

The CLR finally got going in the third inning and put the pressure on in the fourth when they scored 4 runs and in the sixth inning when they brought 5 more across.

Offensively it would be junior Aiden Martinez who went 3-for-4 in the game. Martinez would have a triple and scored one run. He would hit in 5 teammates and stole 2 bases.

Aydin Gomez was also 3-for-4 on the day with 2 runs and 2 stolen bases.

Karson Roesch, a sophomore from McClave, scored twice and had an RBI.

Wiley’s Evan Larrick had a strong day at the plate going a perfect 4-for-4, with 2 runs, 3 RBIs and 4 stolen bases.

The nightcap was a scorefest as both teams kept belting the ball around the field. The Rivals had 16 hits while Rocky Ford added 12 hits.

This game saw four different pitchers for the Rivals. Martinez started going one inning, giving up no hits, no runs, no walks and striking out one. Gomez then came in for 5 innings doing the bulk of the work. The junior gave up 7 hits, 7 runs, and 1 walk but struck out 8 batters. Roesch came in relief for an inning late in the game giving up no hits, 3 runs, 3 walks and no Ks. Finally, Larrick tried to shut the door and worked for 1.2 innings. The sophomore would give up 5 runs on 5 hits, walked one and struck out 3.

Offensively it was Martinez again leading the way going 4-for-4 with 4 runs, 1 RBI, 2 doubles and 3 stolen bases.

Sophomore James Pearson was 2-for-4 with 2 RBIs.

The Rivals will be in action for one game on Thursday, April 14 at home when they welcome Calhan for a first pitch at 3:00 pm. They then travel over to Crowley County for a conference doubleheader on Saturday, April 16. First pitch is scheduled for 10:00 am and 12 noon.