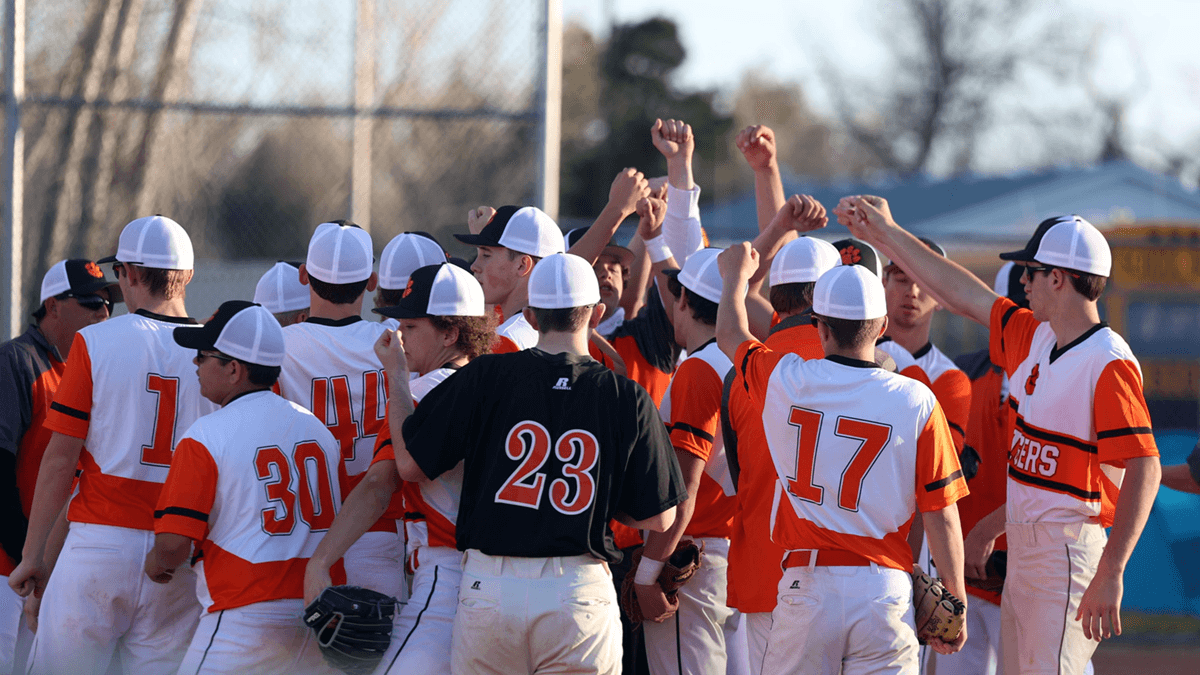 Cheyenne Wells has a number of good players from Kit Carson High School who has joined the team making them a very tough group to beat. The Tigers break the huddle after their win over Elbert on Friday.

The Cheyenne Wells Tigers are now 5-2 in the baseball season with their only two losses coming in a sweep at the hands of the defending state champions Holly Wildcats last week. After that double-header loss in Holly, the Tigers bounced back on Friday in Elbert grabbing a satisfying 12-6 win in the non-conference contest.

An early lead helped the Tigers get the momentum needed to get the win in a game that saw the base paths busy as Cheyenne Wells pounded out 16 hits and Elbert had ten.

The Tigers scored in the first inning getting the early lead off a single. With two outs Paul Mitchek doubled to centerfield, and then Ty Scheler send Mitchek home on a hard ground ball single to right field.

Elbert evened things up scoring their own run in the bottom of the first inning when Logan LaFollette singled on a 1-1 count, scoring one run.

The Tigers grabbed the lead for good in the top of the second inning scoring another run and keeping Elbert scoreless. With one out Blake Gilmore doubled to center field and was moved to third base by Carson Noe on a sac bunt. Gilmore would score on an error by the third baseman when Elbert tried to pick him off.

By the third inning, Cheyenne Wells had put an exclamation point on the game with three more runs leading 5-2. With one out Evan Worley walked and then moved to second on a stolen base. Paul Mitchek then walked putting two aboard. Worley then stole third and was sent home on a Scheler double to center field. Mitchek advanced to third on the play. Mitchek scored on a fielder’s choice when Kody Ryser grounded out to second. Scheler advanced to third with two outs on the field. Marriott then singled and scored Scheler. However, Marriott would be called out on a play at home when he tried to score off a Gilmore double.

Although the Elbert batters were a tough out and they managed to somewhat keep pace with the Tigers’ powerful offense, but they just didn’t have enough defense to hold of the CW batters who finished strong with 3 runs in the fifth inning and two in each of the sixth and seventh innings.

In the fifth inning the offensive firepower was led by Keaton Marriott and Blake Gilmore, both sending runners across the plate with RBIs in the inning. The Tigers did the damage with two outs on the field when Scheler singled to center field and then Ryser singled to the same place moving Scheler to second. Marriot then came up with a big two-run double to right field scoring Scheler and Ryser and making the score 7-2. Marriott then scored on a Gilmore hit to right field making the score 8-2.

LaFollette took the loss for Elbert on the hill. The hurler went five innings allowing 11 hits and eight runs, striking out six. Tanner Ardrey threw two innings of relief out of the bullpen.

Cheyenne Wells junior Ty Scheler took the win on the bump for the Tigers as the righthander went six innings, allowing five runs on nine hits, striking out 12 and walking zero.

The defense for Cheyenne Wells was stellar as no error was committed.

One other key stat that helps explain the Tiger win was the large number of stolen bases. They would commit 10 thefts with Worley picking up 5 stolen bases of his own to lead the way. Mayhan had 2 steals, while Scheler, Marriott and Noe each grabbed one base.

The Tigers are still on the road early in the week as on Tuesday they travel down to Springfield for a double header conference contest that begins at 4:00 pm. Then on Good Friday, April 15, Eads will be at the Cheyenne Wells field for a big conference game. First pitch against Eads is scheduled for 4:00 pm.