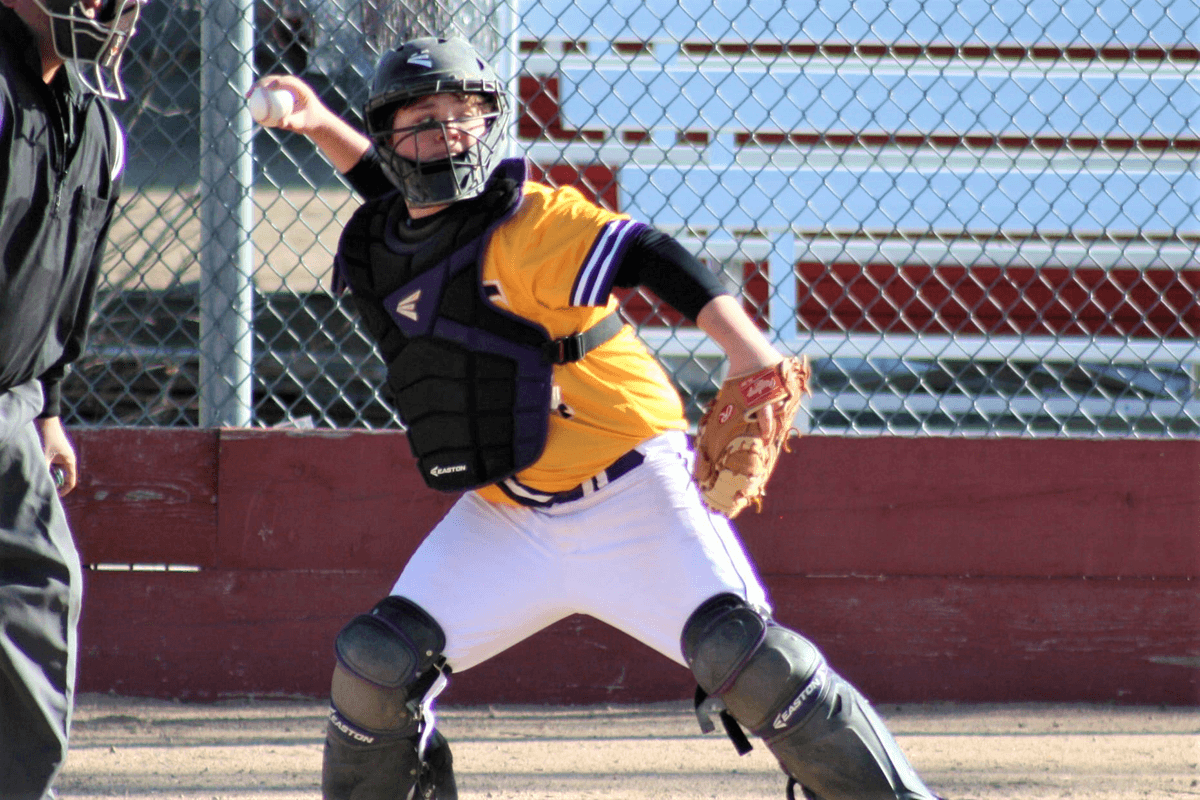 Freshman catcher Spencer Uhland loads up for a play at second base during recent conference competition.

The Eads Eagles continue to play pretty good ball overall as they went 2-1 in conference games over the past week. They led Stratton Tuesday, April 5 in the bottom of the fifth inning, 4-3, but let two runs score on a double by Cooper Seaman. After that the dam broke and Eads lost the contest, 8-4. But, the young Eagles bounced back and swept a good Springfield team in Eads in scores of 4-2 and 16-5.

The Eagles are now 5-2 on the season as they enter the thick of the conference schedule this week.

Despite the strong windy weather on Tuesday, Eads notched three runs in the third inning against Stratton. The rally was led by singles by Donte Sierra and AJ Vasquez and a double by Brenden Reifschneider.

Dawson Thompson started the game on the bump for Stratton. He lasted two and a third innings, allowing four Eads hits and four runs while striking out two and walking one.

For Eads it was Case Nelson who started the game for Eads. The freshman lefty lasted four innings, allowing five runs on six hits and striking out five. Ty Wilson came in for two innings for Eads and gave up two hits and three runs, striking out three and walking one. Wilson would take the loss.

Seaman was the winning pitcher for Stratton as he came in relief and went four and two-thirds innings, allowing zero runs on one hit, striking out five and walking zero.

In Eads on Friday the weather was decent, and Eads was playing decent, as well, although it took them until the fourth inning to clinch the lead and the win over Springfield.

In the bottom of the third inning the Eagles had tied the game, 2-2, on a Vasquez RBI single.

The Eagles held Springfield in the top of the fourth inning and then came to the plate with the score still knotted at 2-2. Freshman Stockton Mitchek singled on a 2-0 count to bring in one run and grab the lead for good.

Vasquez had another stellar day at the plate going 2-for-2 to lead the Eagles in hits. Eads scattered 7 hits around the field with Keenan Smith, Reifschneider, Donte Sierra, Mitchek and Spencer Uhland all adding a hit apiece to the tally.

Freshmen Mitchek and Uhland each chipped in an RBI and Vasquez had two RBIs and a double.

In the nightcap against Springfield the Eagles opened up the game in the second inning scoring 13 runs. Freshman Case Mitchek came to the plate with three ducks on the pond including Vasquez, Cade McDowell and Reifschneider and hit a strong triple to right field bringing all three home. Uhland then added to the fun in the inning as he powered through a double to right field that scored Nelson and Smith. Senior Ty Wilson hit an in-the-park home run scoring Uhland as well. Sierra put an exclamation point on the inning with a towering sacrifice fly to center field that scored the speedy Spady from second base.

In the contest, the Eagles had 12 hits with Uhland, Wilson and Nelson racking up multiple hits. Wilson and Uhland each had three hits in the game.

McDowell was credited with the victory for Eads. The right-handed lasted two and a third innings, allowing two hits and three runs while striking out two. Wilson threw two and two-thirds innings in relief out of the bullpen.

The Eagles now have a huge week in front of them as they are scheduled to face off with two of the top teams in the conference. They will host the 2021 defending state champions in the Holly Wildcats (10-2/7-0) on Tuesday, April 12 with first pitch scheduled for 4:00 pm. Eads then travels to Cheyenne Wells (5-2/4-2) for another key conference game on Good Friday, April 15. First pitch is scheduled at 3:00 pm.