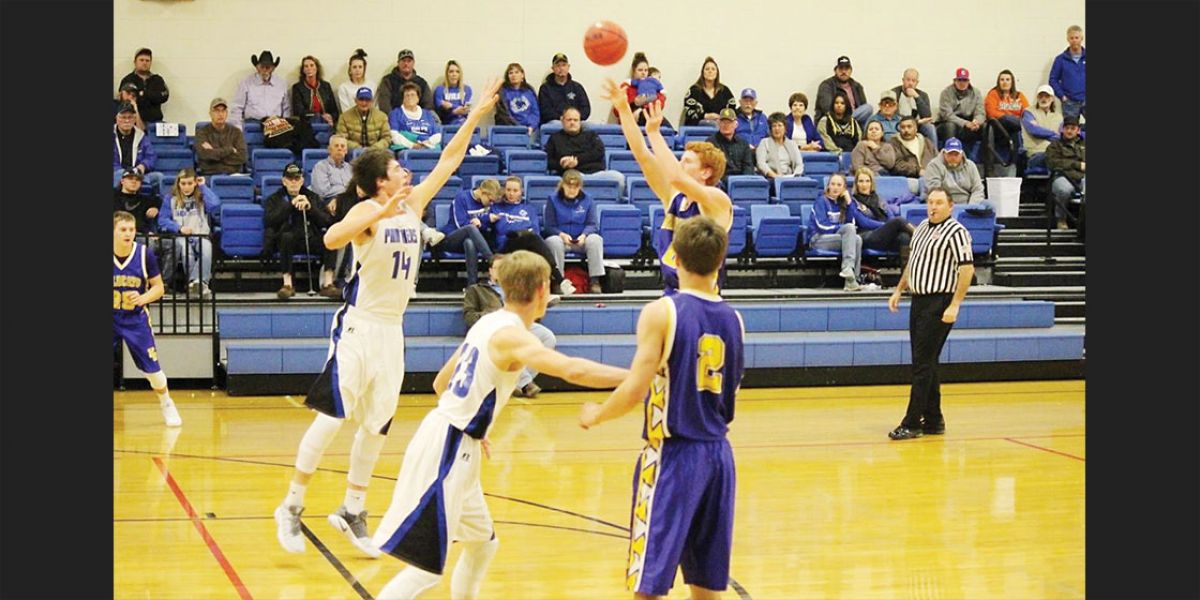 The Kit Carson Wildcats travelled to Wiley last Friday for their season opener against the Panthers.  These two teams have battled many times over the past few years always in close games, and this exciting match-up was no different. Throughout a double overtime game, the respect these teams have for each other was evident in the way the players conducted themselves both on and off the court.

The game opened strong for Wiley as they jumped ahead 6-0.  But the Wildcats answered back and the first quarter closed in favor of Wiley, 15-13.  The second quarter began with a few turnovers by KC and Wiley took advantage.  The Panthers were up by four at the half, 27-23.  In the third quarter the Cats managed to outscore the Panthers 11-10, cutting the Wiley lead to three and setting up an exciting finish.  Kit Carson was able to tie the game late in the fourth and had the ball with just under a minute left, but was unable to score before time ran out with both teams knotted, 41-41.

In the first overtime, Wiley jumped ahead with a bucket, and would force the Cats to foul, but the Panthers were near perfect at the charity stripe.  Up by one with just under 3 seconds left, Wiley was at the charity stripe and made both their free throws.  It looked like the game was over.  But KC inbounded all the way down the court and Blake Dickey sank a long three to tie the game at the buzzer, 48-48.

In the second overtime Wiley had possession, but Jaxon Crawford stole the ball and made the layup to go ahead by two.  In an attempt to stop the Panthers from scoring the Wildcats would take a charge, but a foul was called, instead, and Wiley made both their shots. The game was tied as KC attempted to score, and fouled.  The Panthers again made both their free throws, and with seconds to go, KC had a few chances to score, but was unable.  The Panthers won in double OT, 52-50.

The Cats and Panthers pulled down 32 rebounds apiece. Senior Wildcat Jaxon Crawford led in scoring with 15 points, Brad Johnson had 9, and Blake Dickey chipped in 10 counters.  Crawford pulled down a team high 11 boards, Hornung had 8, and Dickey 5.  Crawford took a charge and led in steals with 4 and assists with 5.

In JV action the Kit Carson Wildcats lost to Wiley on Friday night in a two-quarter game, 29-12. Brayden Bogenhagen was the leading scorer for the Cats with 6 points. Conaway led in rebounds with 6, while McCombs-Farmer led in steals with 3, and McCombs-Farmer and Cordell led in assists with 1 apiece.

On Saturday Kit Carson had their first home game, hosting the Idalia Wolves.  The Wildcats looked a lot more confident with one game under their belt.  In the first quarter the Cats jumped out to a 14-4 lead.  Good scoring by the Wolves into the second quarter gained Idalia 13 points, but the Cats added 19 of their own, making it 33-17 as the game went into half time.  In the third quarter KC’s defense came on strong holding the Wolves scoreless while making 21 points, a fact that ultimately determined the victor.  Kit Carson led 54-17 at the end of the quarter.  The deep KC bench saw lots of playing time in the 4th quarter, the final 68-25 in favor of the home team.

The Cats managed 41 rebounds compared to the Wolves 26. Crawford led in scoring with 18, Dickey had 16. Conaway pulled down a team high 9 rebounds and Hornung brought down 7.  McCombs-Farmer and Conaway each took a charge.  Medford led in steals with 3 and Johnson led in assists with 11.

In JV Action the Wildcats beat Idalia 52-21.  Leading scorer for the Cats was David Arnold with six 3-pointers for 18 total points.

Coach Trahern commented on the Wildcat’s opening weekend of the 2016/2017 season.  “I thought all things considered it was a good start for us.  Obviously we would like to have won the Wiley game, and we certainly did have plenty of chances to do that, but we just couldn’t get it done.  For a season opener that game provided a ton of teaching moments that no doubt will help us from here on out.  We will get better in all phases with our skills but as a team that provides a foundation for how key plays; no matter when they happen in a game, will have an impact on the outcome. Against Idalia we played a little better in all areas and got plenty of playing experience for many of our players.  That will be a big key for us through the first half of the season, to build depth.  We have a lot of players, with experience; will be valuable contributors this season.  This week, going into the Holiday Tournament, our practices will emphasize our defensive consistency and our rebounding, as well as our free throw shooting.  With only three days it will be fun to see how much skill improvement we can make in a short time.  Both our team offense and team defense will get better as the season progresses and obviously our individual skills will get better as well.  This past weekend shows our team has a lot of promise this season and we are looking forward to this weekend at Lamar.”

This week the KC Wildcats travel to Lamar for the Annual Chamber of Commerce Holiday Tournament.  Kit Carson squares off in round one against Walsh in the 4:00 game on Thursday at the Lamar Community Building.