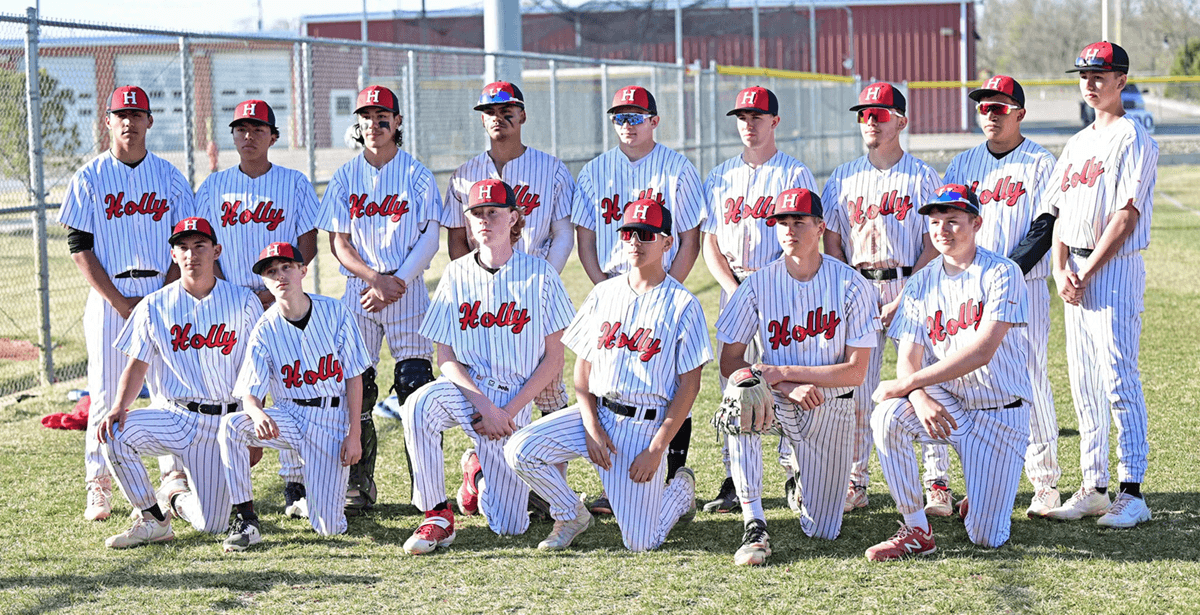 The Holly Wildcats enter the District 3 Tournament seeded #1 with an undefeated league record.

The regular season has ended for the area 1A teams, all who now advance into the first round of the District 3 Tournament. Winners of quarterfinal games on Tuesday at the higher seed will advance to the semifinals in Las Animas on Saturday, May 7.

The County Line Rivals are in the 2A division in Colorado baseball and consists of players from Wiley and McClave. The 2A division still has a few weeks left in the regular season.

Holly leads District 3 and is highly ranked in the 1A divisiion. They enter the conference tournament seeded #1 with a 15-2 season record and a perfect 12-0 league record. Manzanola is seeded number 8 and will have the dubious honor of traveling to Holly on Tuesday for one game where winner advances and loser goes home and hangs up their cleats.

Granada grabbed the #2 seed over Cheyenne Wells (#3) in their final meeting of the season as they needed just one of the double header wins to take the stronger position. Granada will take on #7 La Veta at home on Tuesday. On April 8 the two teams met for a double header with the Bobcats taking both contests in scores of 18-0 and 9-6. Game time for this quarterfinal contest is TBA at this time.

In the middle of the District 3 pack is an intriguing game between Stratton #4 and Eads #5. The two teams met very early in the season on April 5 in a single game where Stratton took the win 8-4. Eads carries an 8-7 overall season record and a 4-5 conference record. Stratton is at 9-9 on the season and 6-7 in the conference. Game time is at 4:00 pm on Tuesday in Stratton.

Last week the Rivals could not find a way to defeat Holly as the Wildcats came away with the doubleheader sweep in game scores of 16-1 in Game 1 and 8-6 in Game 2.

In the first game Holly’s pitching kept the Rivals off the base paths while their bats got hot right away scoring in every inning, including a 7-run inning in the bottom of the fourth. Holly pounded away for 8 hits while the Rivals managed to get 2 in.

For the Rivals only Aydin Gomez and Evan Larrick managed a hit apiece, while Caleb Barr brought in 1 RBI.

Dakota Eaton was the winning pitcher going the distance for 4 innings, giving up 2 hits and 1 run, walking 0 and striking out 9.

The Rivals used three pitchers in the first game with Jace Parker taking the loss going 2.2 innings and giving up 6 hits and 9 runs, walking 5 and striking out 5. Rhett McDonald and Kasen Malone combined for one inning in relief.

The Rivals challenged Holly in Game 2, but it wouldn’t happen until the final inning. With the Wildcats scoring 4 in the second, one in the third and three more in the fourth, the Rivals took the top of the fifth to run off 6 runs. Unfortunately, they ran out of room losing 8-6.

Aiden Martinez was the losing pitcher going the distance in four innings of work giving up 9 hits, 8 runs, walking 4 and striking out 2. Martinez was also tough at the plate with a double, 2 RBIs and scored a run.

Holly used a contingency of good pitchers from the bullpen to put together the win. Technically, Terrazas took the win on the hill going 4 innings and giving up no hits or runs, walking 2 and striking out 10 Rivals.

Terrazas hit his second dinger of the day in this contest and added a triple to boot. He would rack up 3 RBIs and 2 runs. Devin Eaton was 3-for-3 in the game with 1 run, 1 RBI and a double.

Last Friday the Rivals took on Swink in another double header. They dropped the first game 13-3 to the powerful offense from the Lions. Game 2 was a slugfest with the Rivals falling just short, 23-21.