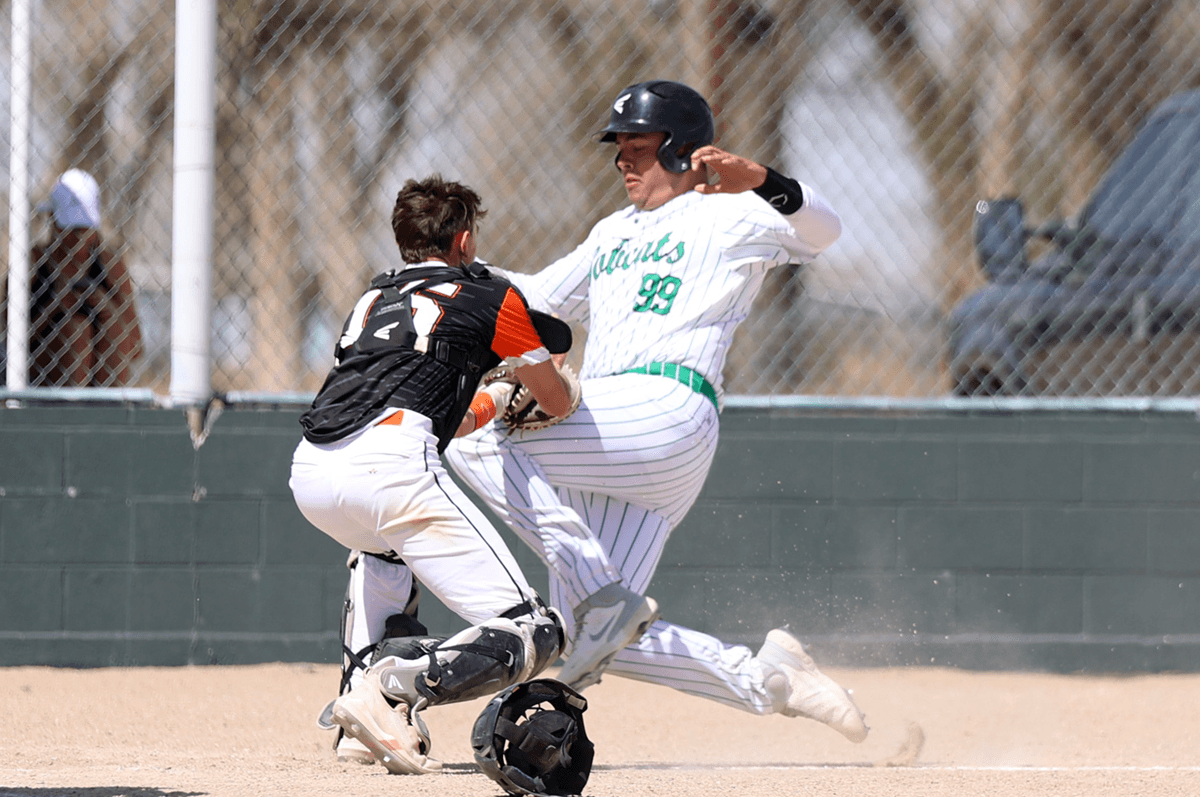 Cheyenne Wells catcher Brett Mayhan (#15) makes the tag on Granada’s John Hainer at the plate in an exciting match-up between the two teams on Saturday.

The Cheyenne Wells Tigers finished the regular season as road warriors over the past week as they played five games and successfully put up a 4-1 performance for the week. All the games were conference games that were key to moving forward into the playoffs.

In the conference double-header against Springfield on Tuesday the Tigers took the broom to the Longhorns in scores of 6-4 in the first game and 26-6 in the second.

The first game saw the Longhorns take the early 4-0 lead after three complete innings. The Tigers roared back in the top of the fourth and again in the fifth scoring three runs in each column to grab the 6-4 lead. The CW defense then shut the door on Springfield in the bottom of the fifth.

In the fourth inning the Tigers’ run started when Alex Mitchek reached base on an error by the pitcher. Then with two outs and Mitchek on second base Kody Ryser pulled a walk and Keaton Marriott juiced the bases with a walk of his own. Blake Gilmore then came to the plate and blasted a double to left field that scored three including Mitchek, Ryser and Marriott.

Then in the top of the fifth the Tiger’s tied the game, 4-4, when Evan Worley started the series out with a walk. Alex Mitchek then moved the speedy Worley home on a hard ground ball single to left field tying the game.

They worked toward the lead when Paul Mitchek hit Alex Mitchek into a force out at second for two outs. However, Kody Ryser then came to the plate and blasted the homer over the left field fence scoring Paul and himself and extending the lead to 6-4.

Tiger junior Blake Gilmore toed the mound for Cheyenne Wells and lasted three and two-thirds innings, allowing six hits and four runs while striking out seven. Classmate Ty Scheler came in relief for 1.1 innings and gave up no runs and no hits, walked one and struck out two.

Jones was on the mound for Springfield. He surrendered four runs on four hits over four innings, striking out eight. Batterton threw one inning in relief.

Offensively, the Tigers were led by Alex Mitchek with two hits in his three at-bats. Gilmore added a double and 2 RBIs, and Ryser added the key homerun with 2 more RBIs. Ryser also scored 2 runs in the tight game.

Evan Worley led the team in stolen bases with four and the Tigers ran wild over the base paths with 11 stolen bases. Brett Mayhan added 2 more.

The Tigers started their run in the first inning on an Alex Mitchek single scoring two runs.

Cheyenne Wells then scored 11 in the second inning. The offensive onslaught came from singles by Mitchek, Ryser, Gilmore and Scheler. Mayhan, Scheler and Worley all doubled.

Paul Mitchek was on the mound for the Tigers. The right-hander surrendered one run on three hits over two innings, striking out one and walking zero.

On Thursday the Tigers used an 8 run fifth inning in La Veta to win their third conference game of the week in a run-fest, 19-10.

Again, it was Gilmore who was the offensive catalyst going 4-for-4 at the plate.

Mayhan got the start for the Tigers allowing six hits and eight runs over one and two-thirds innings, striking out three.

Scheler then came in for three innings of relief giving up no runs on 3 hits, walking 2 and striking out 7. Marriott chipped in inning at the end and Paul Mitchek finished with 1.1 innings pitched.

The Tigers also tore up the base paths with 11 stolen bases. Gilmore led the way with 6 steals while Cade Mitchek and Marriott each had two apiece.

The extremely busy week of conference baseball was culminated when the Tigers was once again on the road to take on the Granada Tigers in a make-up double header with the result being key to the post season seeding. It was a barnburner of a double header on Saturday as the Bobcats eked out the first game, 5-4. But the Tigers came back in the nightcap and grabbed an exciting 2-1 win to split the difference.

The Tigers are now 12-4 on the season and sport a 10-3 league record, good enough for the runner-up spot behind Holly. Granada, after the finale with the Tigers, are 9-4 and sitting 3rd in the conference.

In the first game against Granada, it came down to the last play of the game, but the Tigers were on the wrong end of the 5-4 defeat at the hands of the Bobcats. The game was tied at four with Granada batting in the bottom of the fifth when Maddox Coleman doubled scoring the winning run.

Cheyenne Wells lost this contest despite out-hitting the Bobcats 9 hits to five.

Granada opened up an early lead in the first inning scoring four runs starting when Brian Gonzales hit a single to right field. Maddox Coleman arrived on base on a Tiger error and Gonzales hurried to third base.

With one out and runners on the corners Dominic Coleman single on a ground ball to third. Gonzales scored and Maddox Coleman advanced to third base.

After a Ty Scheler strike out to make it two away, Luis Cano singled to bringi in both Coleman brothers. During the last at-bat Cheyenne Wells committed a throwing error that also brought in Cano before the third out was made.

The Tigers had scored two of their own in their first at bat when Alex Mitchek singled with two outs on the field. Scheler then came up and doubled to center field putting runners on second and third. Paul Mitchek then hit a hard single past shortstop scoring both Alex Mitchek and Scheler.

The C-Dub group got another run in the top of the third inning coming to within a point, 4-3. In that inning Mayhan started it out with a double to center field. With one out Alex Mitchek also singled to center field scoring Mayhan.

The pitching dual continued until the last inning when Cheyenne Wells scored one run in the top of the stanza tying the game 4-4 when Brett Mayhan arrived on an error at second base. Mayhan then put himself into scoring position at second on a passed ball. Alex Mitchek came up with a big double to center field, but Mayhan was caught at home trying to score making it two outs and a huge opportunity lost.

With two outs Scheler helped himself with a single moving Alex Mitchek to third. Paul Mitchek then hit in his twin brother Alex on a double to center field while Scheler landed on third. Unfortunately, Scheler was stranded there when the next batter grounded out for three away.

With Granada down to their last out and facing extra innings in a tied ball game, Gonzales singled to left field. Coleman then came up and hit a deep fly ball to center field allowing Gonzales enough time to aggressively round the bases and slide in home for the win.

Dominic Coleman was the winning pitcher for the Bobcats. Coleman lasted five innings, allowing nine hits and four runs while striking out 11 and walking just one.

Scheler took the loss for Cheyenne Wells. The righty lasted four and two-thirds innings, allowing five hits and five runs while striking out nine and walking one.

Cheyenne Wells racked up nine hits with Alex Mitchek, Scheler, and Paul Mitchek each coming through with multiple hits. Alex Mitchek went 3-for-3 at the plate to lead the Tigers in hits.

The nightcap of this double header between two top conference teams was just as exciting as a pitcher’s duel was yet again on display as the Tigers just nipped the Bobcats, 2-1.

Gilmore was the winning pitcher for Cheyenne Wells allowing seven hits and one run over five innings of work. The junior struck out six batters and walked one.

Gonzales took the loss for Granada. The Bobcat allowed just two hits and zero earned runs over three innings, striking out six and walking one. John Hainer came in for two innings of work giving up 5 hits and 2 runs, striking out 2 and walking 3 batters.

The scoreboard was empty for both teams until the Tigers struck first in the top of the fourth inning when Carson Noe pulled a walk and Worley followed suit. Gilmore then came up and hit a single to third base forcing out Ryser. Worley and Gilmore were left at second and first respectively.

Brock Ziegler then moved both runners on a ground out to second base making it two outs on the field. Mayhan then pounded a hard hit at the second baseman who mishandled it scoring Worley and Gilmore.

Granada then answered in the bottom of the same inning with one run of their own when Dominic Coleman hit the sweet spot for a home run over the center field fence.

To Gilmore’s credit, the junior came back after the Coleman dinger and struck out the next two batters to get out of the inning and eventually save the 2-1 victory.

Next week both teams will advance into the playoffs due to their RPI ranking.