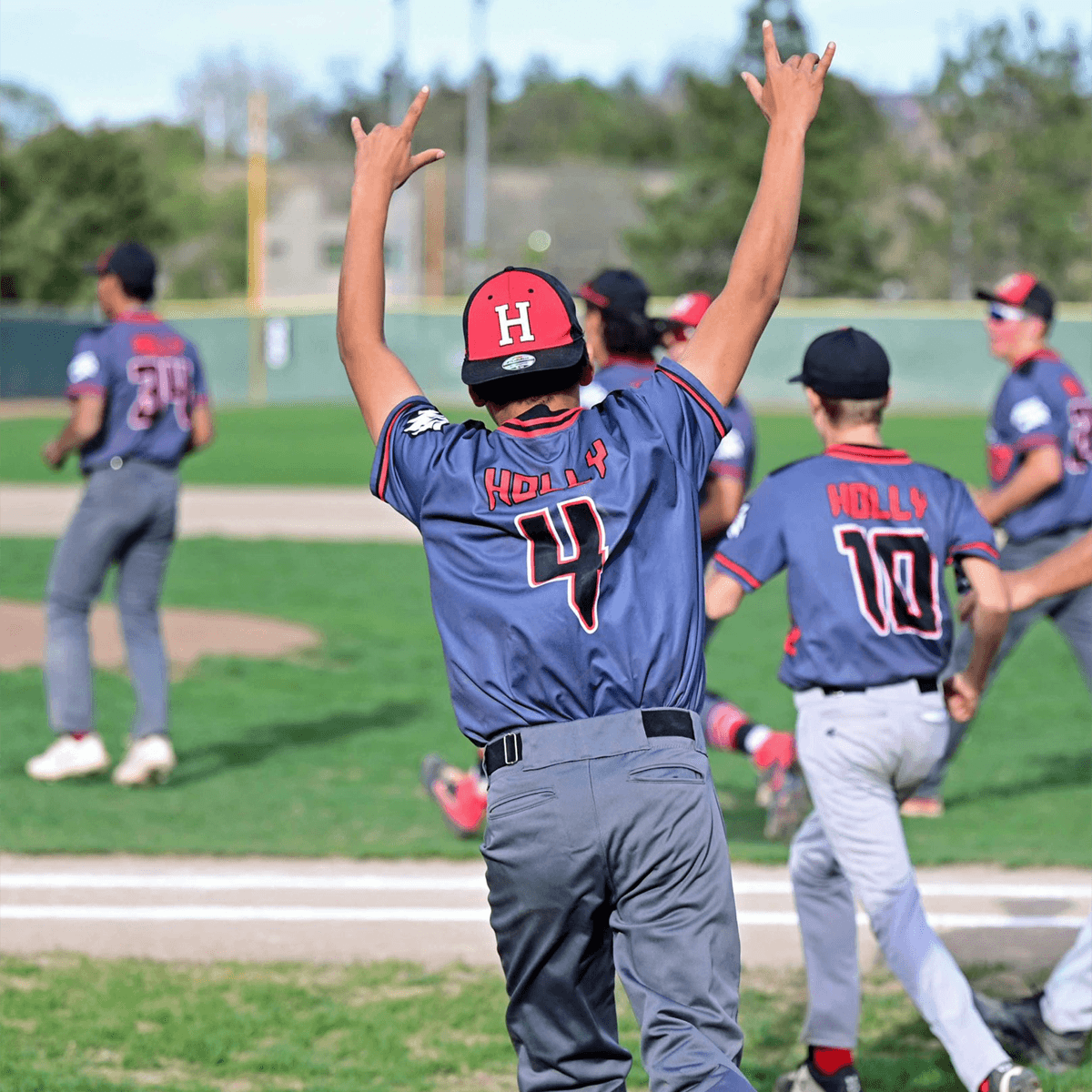 Holly players charge the field after the third out by Andre Salgado on the mound winning the extra innings game over Evangelical Christian. Holly advances to the 1A Final Four State Finals on May 19.

The Holly Wildcats baseball team defeated Evangelical Christian, 12-8, to win a regional tournament championship at Spurgeon Field in Colorado Springs on Saturday, May 14.

The defending Class 1A state champions Wildcats (19-3) will face Haxtun in the state semifinals on Thursday, May 19 at All-Star Park in Lakewood.

The time of the game as yet to be announced.

The first inning against the #3 team in the state had Eads battling as they scored two runs in their first at-bat sending a strong message to the other Eagles that they were there to play ball.

In the first inning Porter Spady singled to start the inning. With two outs, senior Donte Sierra hit a ground ball and arrived on an error by the shortstop and Spady scored on the same error. Keenan Smith then arrived on another error at shortstop advancing Sierra to third. Freshman Case Nelson singled to right field allowing Sierra to score.

The EC Eagles scattered 11 hits around the field despite having four errors.

Offensively, Eads had 4 hits coming from Spady, who was 2-for-3 at the plate, Case Nelson and senior Cade McDowell.

For Eads it would be the freshman southpaw, Case Nelson, who got the start on the bump going just 1.1 innings before the EC group chased him off giving up 8 hits and 11 runs, walking 3 with no strike outs.

Senior Ty Wilson came in relief and worked through 2.2 innings giving up 3 hits and 2 runs, walking none and striking out 1.

The loss ended Eads’ season with an 8-9 overall season record.

HOLLY TAKES CARE OF EVANGELICAL CHRISTIAN IN THE FINALS

In the other semifinal regional game, the Holly Wildcats dominated Caliche, 10-0.

The Wildcats did not score in the first inning, but after that the bats warmed up scoring runs in every inning including 3 runs in the second, 1 in the third, 3 more in the fourth, 1 in the fifth and 2 more in the sixth inning.

Holly scattered 12 hits around the field.

Roque Torres, a Holly junior had one hit and scored twice.

Devin Eaton, a freshman, was 2-for-3 on the day scoring a run and adding an RBI.

Andre Salgado had 2 hits and scored a run, gave out an RBI and had one triple.

Dakota Eaton got the win on the mound as the senior went 5 innings giving up 2 hits and no runs, walking 1 batter and striking out 6.

Salgado came in for 1 inning of relief work giving up no hits or runs, walking one and striking out one.

The win advanced the Wildcats to the regional finals against Evangelical Christian with the season on the line. Holly came through with the exciting win, 12-8, after the two teams were all knotted up at the end of the regular 7 innings of play. The Wildcats scored 4 runs in the extra inning to advance to the 1A Final Four tournament.

It took a team effort from the bullpen to pull off this win over a very tough EC Eagles group. Senior Dakota Eaton started things out for 2 innings of work giving up no hits, but 3 runs, walking 2 batters and striking out 2.

Terrazas then took to the mound for the bulk of the game going 4.2 innings giving up just a single hit and 5 runs, walking 5 batters and striking out 10 Eagles.

Salgado closed it out in 1 full inning in the 8th inning to hold the Eagles scoreless and hitless by walking one and striking out one. The sophomore would get the win.

Holly, who won the 1A state baseball championship a year ago is a relatively young team but led by good senior leadership in Dakota Eaton and Cauy Stum. They are a different team than last year but loaded with some exceptional talent in the underclassmen.

They now advance to the Final Four where they first take on Haxtun (#7) who upset Cheyenne Wells in the other regional tournament on Friday, 3-2. If the Wildcats get past that first round challenge, they will play either #1 Merino or #12 Nucla.

In yet another regional tournament played on Saturday the Granada Bobcats (#9) took on Simla (#9) and lost 8-1 ending their season.

For Granada, the loss meant the end of their season and the loss to graduation of three fine seniors. The will lose a key starter in Dominic Coleman, their main ace on the hill and best batter who carries a .634 batting average. Coleman leads in runs (22), hits (26), RBIs (23) and is tied with John Hainer for the most homeruns with 3.

Granada also loses Ivan Yanez who has a .395 batting average and strong overall stats. One other senior, Shania Sigala is a strong athlete in her own right playing softball for Lamar, and volleyball, basketball and track for Granada.