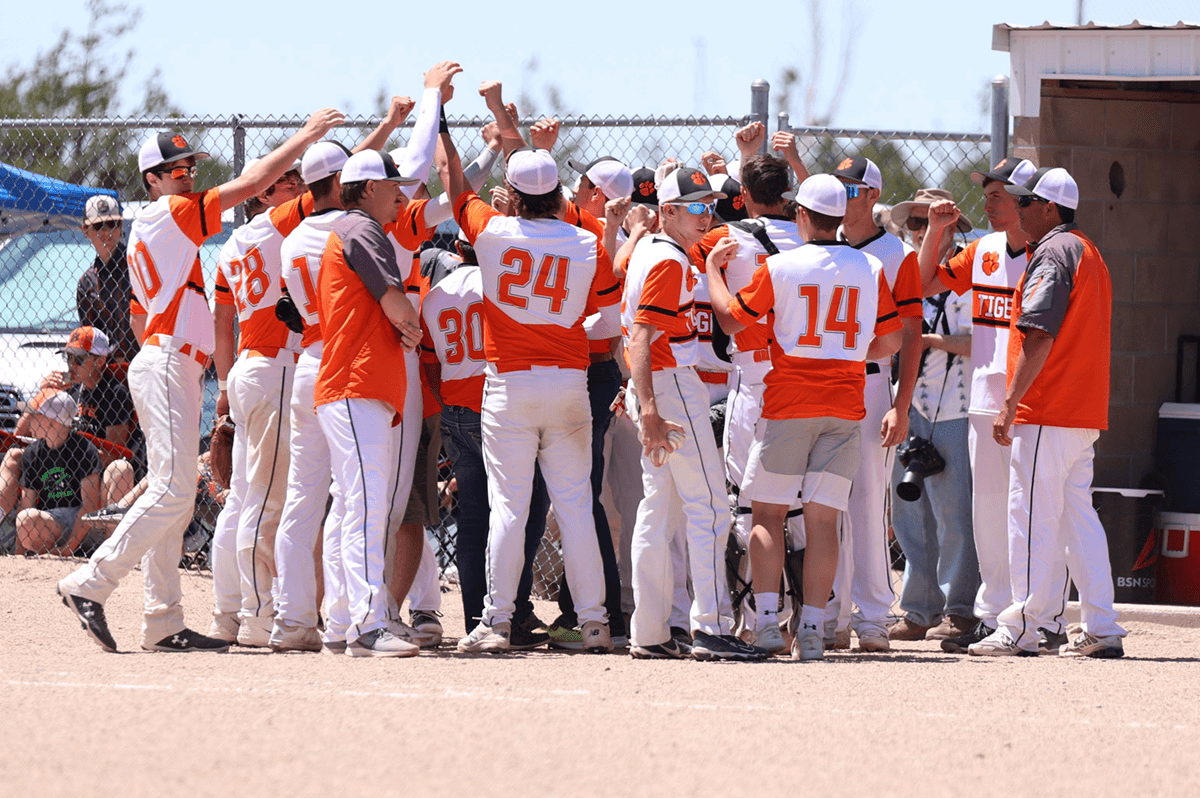 Cheyenne Wells ended their season with an impressive 16-5 overall record losing in the Great Eight round of the state tournament.

The #2 Cheyenne Wells Tigers were hosts for one of the four Regional tournaments scheduled for 1A Colorado Baseball on Saturday after they upset the top-ranked Holly Wildcats in the District 4 championship game, 2-1, the week before.

As the top seed the Tigers hosted the Regional tournament that featured #7 Haxtun, #10 Stratton, and #15 Prairie.

In game 1 the Haxtun Bulldogs just eked out a win over Stratton, 10-9, eliminating the Eagles’ season and advancing to the Regional finals.

Cheyenne Wells then took care of Prairie in a big score of 11-1 to move to the Regional finals and square off with the Haxtun group.

It was a classic game and another pitcher’s dual to the end. But when the final at-bat had cleared, the Tigers could not manage to get in the Final Four door losing 3-2 to the Bulldogs who slipped into the Final Four and will face off with Holly. The other side of the bracket will feature Merino (#1) and Nucla (#12) with the winners moving into the state championship later in the day on May 19th.

Cheyenne Wells snatched the lead late in the Prairie game in an 11-1 victory on Friday. The game was tied at one with the Tigers batting in the bottom of the fourth when Evan Worley singled on a 1-1 count, scoring Paul Mitchek and Cade Mitchek.

Later in the inning Alex Mitchek tripled to left field scoring Keaton Marriott and Hyle. Ty Scheler then hit Mitchek in on a hard single to center field and Scheler would score on a single by Cade Mitchek.

All in, the Tigers topped off 8 runs in the fourth inning.

Blake Gilmore was on the mound and took the win for the Tigers and allowed three hits and one run over five innings, striking out seven and walking zero.

The Cheyenne Wells group pounded out 11 hits in the game with Alex Mitchek, Cade Mitchek and Scheler coming away with multiple hits.

The win moved the Tigers into the Regional championship against Haxtun who just slipped past Stratton in the semifinal game.

Both Cheyenne Wells and Haxtun had tremendous performances from their pitchers, but Haxtun was just a tad bitter stronger at the plate grabbing the 3-2 win.

Scheler was tremendous on the bump as the right-hander register 21 outs in the game. The junior went the complete 7-inning game giving up 5 hits and 3 runs, walking 3 and striking out 13.

The Tigers dug their claws in and came back in the bottom of the sixth inning and put two across.

That inning started when Alex Mitchek was hit by the pitch. Scheler then moved Mitchek to third base as he grounded out at shortstop. Paul Mitchek then brought in twin brother Alex on a hard ground ball single to left field making the score 3-1.

Kody Ryser then made it happen arriving on base due to an error by the shortstop. Dillon Ball, running for Alex Mitchek, advanced to third base on the play. The Haxtun group then committed an error at second base bringing the ball in allowing Ball to score.

But that was all the Tigers could muster as Haxtun made the plays in the bottom of the 7th and took down the Tigers in three straight at-bats.

Cheyenne Wells committed too many innings to win this close game as the Tigers committed five.

The Tigers had just 4 hits to Haxtun’s 5 hits.

Paul Mitchek pounded out 2 singles in his 3 at-bats. Carson Noe was 1-for-2. Runs came from Alex Mitchek and Dillon Ball.

The Tigers will lose some exceptional ball players from this very successful team.