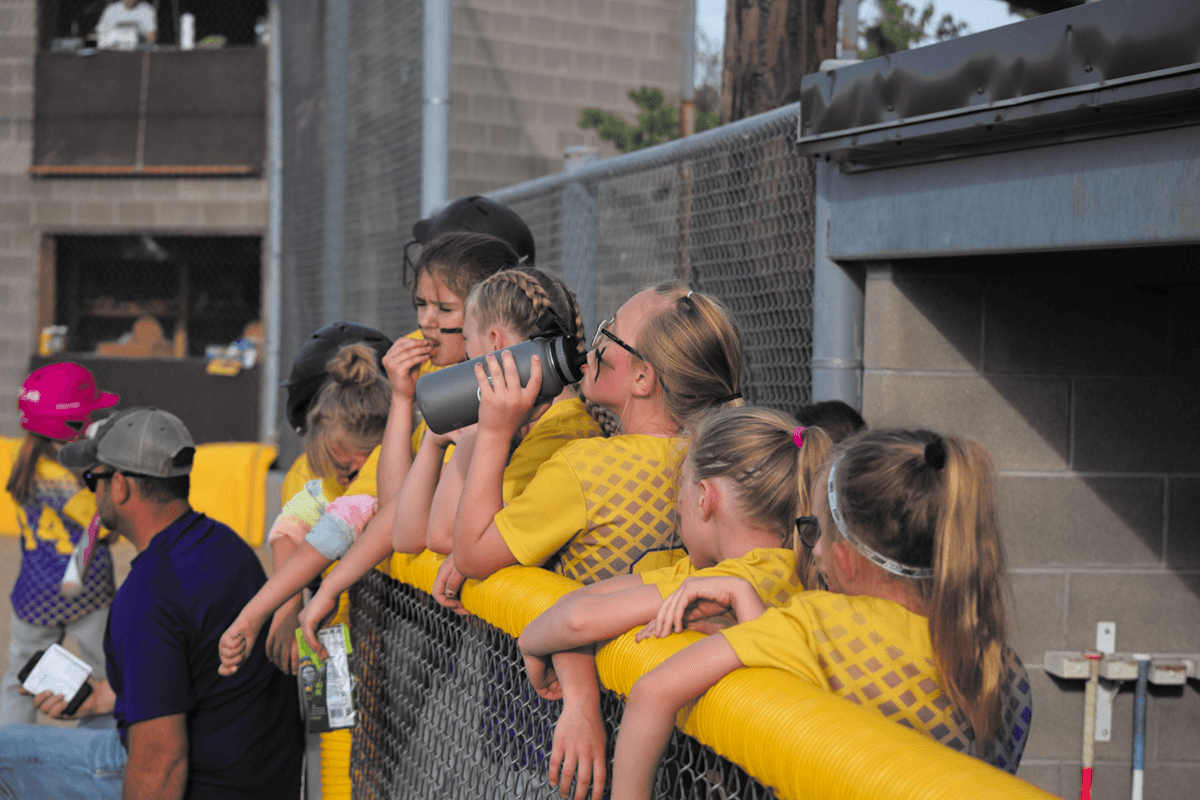 Dugout Details: The Eads Minors Softball players watching their team take their turn at the plate during recent action at the Homeplate Field in Eads.

The Eads Minors Softball team has been very busy this summer as they have already played six league games within the Lamar League and still have 7 games to go before tournament time. The team is coached by Justin McLoud and Chandler Kent.

This is a feisty group of players as most of them, with the exception of McLoud, Hollis, Bletzacker and Zoey Trosper, are young enough to play in the 8U Coach Pitch division which is the transition team after tee ball that teaches the fundamentals of softball. However, because Eads would not have been able to field a Minors team with just four players the rest of the youngsters stepped up to play against much older players in the Minors league. These little players are used to playing up as they also did it in basketball, as well.

Despite their youth the Eads Minors sport a 5-1 record midway through the season. The only team that has beat them is a mature group from McClave that dominated the contest, 14-1. Otherwise, they have defeated Granada (14-11), Wiley (9-8), Cheyenne Wells twice (14-1 and 14-9) and Fellowship Credit Union out of Lamar (11-1).

Eads only had one hit from McLoud in the contest, but 10 batters walked. At that point these fast little girls used their speed as they stole 20 bases in order to score. Bletzacker scored two runs.

Eads jumped out to a five-run lead against Wiley and used that first inning to hold off an attack by Wiley who scored 2 runs in the top of the fourth inning tying the game. But in the bottom of the fifth inning, Eads put the winning run across when Bletzacker walked and then stole second and third. She would then steal home to win the game.

Eads had three hits in the game coming from McLoud, Brown and Hollis. They walked 11 times and stole 29 bases.

Emma Hollis was the winning pitcher for Eads giving up 5 Wiley hits and 8 runs while walking 7 batters and striking out 10.

Eads scored 5 runs apiece in the first and second innings to take charge of the game against Cheyenne Wells. They had six hits in the contest coming from Paitin Jones, Zoey Trosper, Brown, Hollis and Keplar, who had 2 hits. The Eads girls walked 11 batters and 5 struck out.

McLoud was the winning pitcher going 2 innings and giving up 2 hits, 1 run, did not walk a batter and struck out 4 hitters. Alex Kent came in relief for one inning giving up a hit, walking one and striking out one.

Eads used two big innings scoring seven runs in the first and the third innings to win the close game. The Cheyenne Wells girls got going in the third and fourth innings, but it was not enough to catch up with the Eagles.

Eads had five hits in the game with Kent, Hollis, Brown, Bletzacker and Zoey Trosper getting the ball in play. Bletzacker and Brown each had a double. 11 batters would walk and 4 struck out.

Hollis started the game and got the win by going 2 innings giving up no hits, no runs, walking 3 and striking out 3. Kent then came to the circle for the final two innings getting the win giving up two hits and giving up nine runs, walked 8 and struck out 3 batters.

With Eads up 4-1 after the first inning the Eads girls blew the game open in the bottom of the second inning by scoring 7 runs. They had no hits in the game but used 13 walks to run wild on the bases. Bletzacker and Kent each scored 2 runs.

McLoud was in the circle for the three innings and gave up just one hit and one run, she walked 6 and struck out 6.

They will then play three games at the start of the next week and it will be time for the league tournament in Lamar the next week.