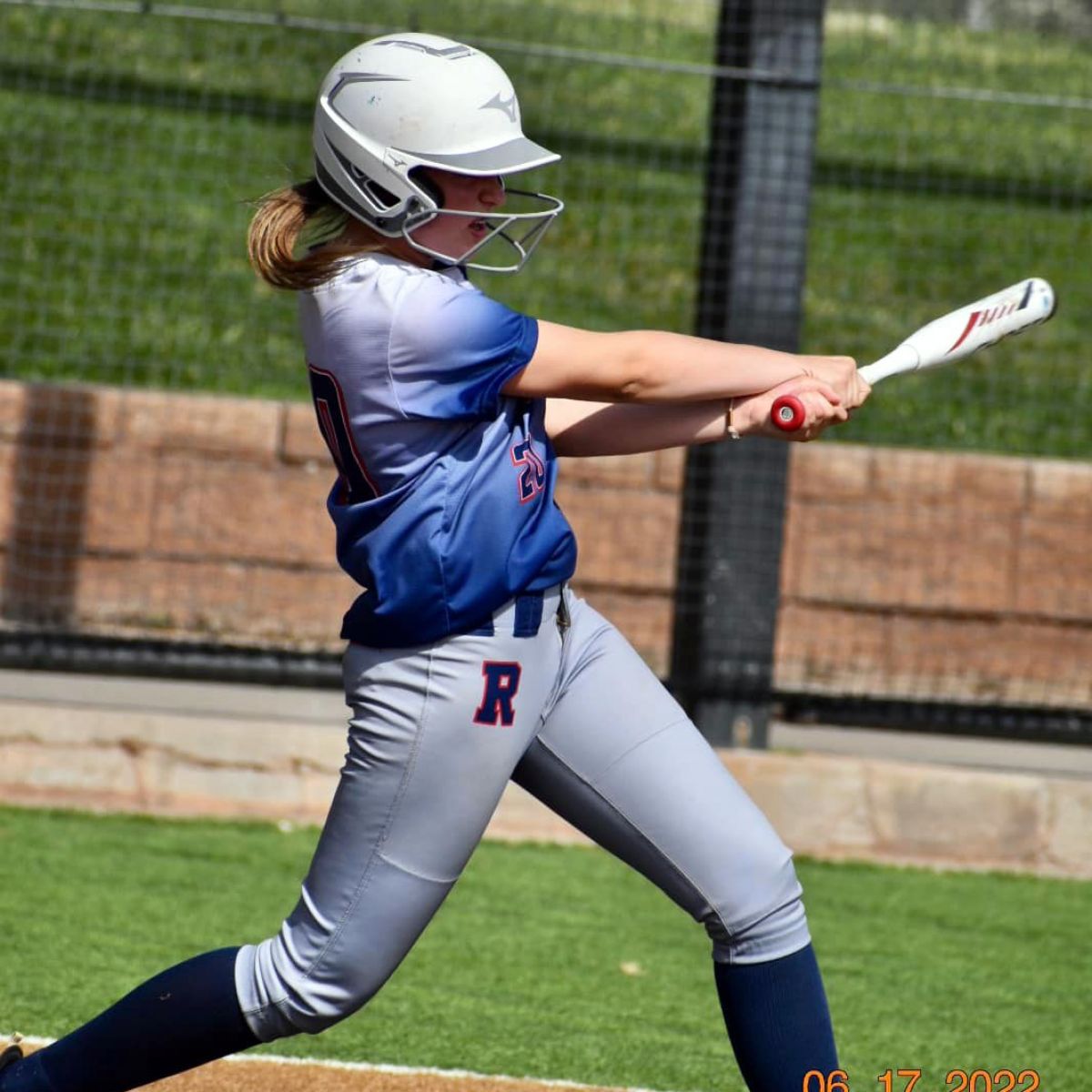 Last year, as a 12U contender, the oldest Rivals team in the area with players from Eads, Wiley, McClave and Lamar had a very successful run throughout tournaments in Kansas and the front range. This year, however, they are mostly the youngest in an older division and also lost one of their top pitchers with a knee injury. Nevertheless, these feisty girls have been battling and fighting their way to some success in the older division.

At the DC Super C Tournament at Legends Park in Dodge City, KS over the weekend, the Rivals 14U joined other local teams including the Rivals 12U and Rivals 10U representing the southeastern corner of the state. The 14U Rivals came away with a mixed bag result getting a tie, a loss and a win in the pool play days of Friday and Saturday, but then losing in the first round of tournament bracket play on Sunday.

In their first pool game on Friday the Rivals 14U came up against the Khaos Softball 14U group and played them to a tie, 3-3, after three innings of play. The Khaos scored one run in each of the three innings played while the Rivals had to come from behind in the bottom of the third inning trailing 3-1.

The Rivals 14U outhit their opponent 10-1 but could not get their runners across home plate stranding 7 base runners.

The 10 hits came from second baseman B. Penaflor who had two hits and from doubles by Dixie Bitner, Savannah Brown and J. Salgado. Lexi Shotton, Kara Wilson, Bailey Sierra, Mel Salcedo and Zoie Martinez each added singles. Shotton had the only stolen base.

Sierra was in the circle for the 14U Rivals going the distance in three innings and giving up just one hit, 4 runs, walked 9 batters and struck out 2.

In the second pool play game on Saturday morning the Rivals lost to the Guymon Lady Tigers, 8-3. The Rivals scored on their first at-bat in the top of the first when Shotton drew a walk and then was moved to third by a Bitner single. Shotton then scored on a passed ball.

Trailing 8-1 the Rivals put some effort into scoring finding some success in the top of the third inning when they would score twice.

Salgado would start the run with a single and scored when Shotton came up and blasted a triple to center field. Wilson then singled to center field scoring Shotton.

The Rivals managed 5 hits against Guymon including Shotton’s triple and singles by Bitner, Wilson, Sierra and Salgado.

The Rivals 14U then got their first true win later on Saturday as they defeated the home team DC Outlaws, 10-5. In that contest the Rivals scattered 11 hits around the field scoring 5 runs in the first and adding four more runs in the second inning. After a bad defensive start against the Outlaws in the first inning where they scored 4 runs, the Rivals’ defense settled in and held the Outlaws to just one more run.

Shotton had 3 hits and 3 RBIs and also stole a base. Wilson and Salgado had two hits apiece with Wilson having a double. Bitner (double), Sierra, Salcedo and Wertz (double) all added one hit apiece. Salcedo had 2 RBIs, while Bitner and Sierra each added an RBI apiece.

Penaflor would get the win in the circle relieving Sierra after .1 innings in the first. Penaflor would go 2.2 innings giving up 3 hits, 1 run, 2 walks and struck out 3 batters.

Sunday was tournament day, and the 1-1-1 Rivals were seeded against a tough team called Steam 14U. The Rivals would go home after losing in the quarterfinals to the Steam, 6-2.

The Rivals grabbed the early lead but watched it slip away. After the Rivals 14U scored one run in the top of the second, the Steam answered with one of their own. The Rivals scored when Savanna Brown singled and scored a run.

Sierra started the game in the circle allowing three runs on one hit. Penaflor came in for three innings of relief giving up 3 hits and 3 runs, walking 2 and striking out 6.

The Rivals only managed 3 hits in the game with Bitner, Brown and Wilson all registering singles. The runs came from Bitner and Martinez.

Next weekend the Rivals 14U will compete in the Western Kansas USSSA State Championships in Hays, KS on June 24-26.