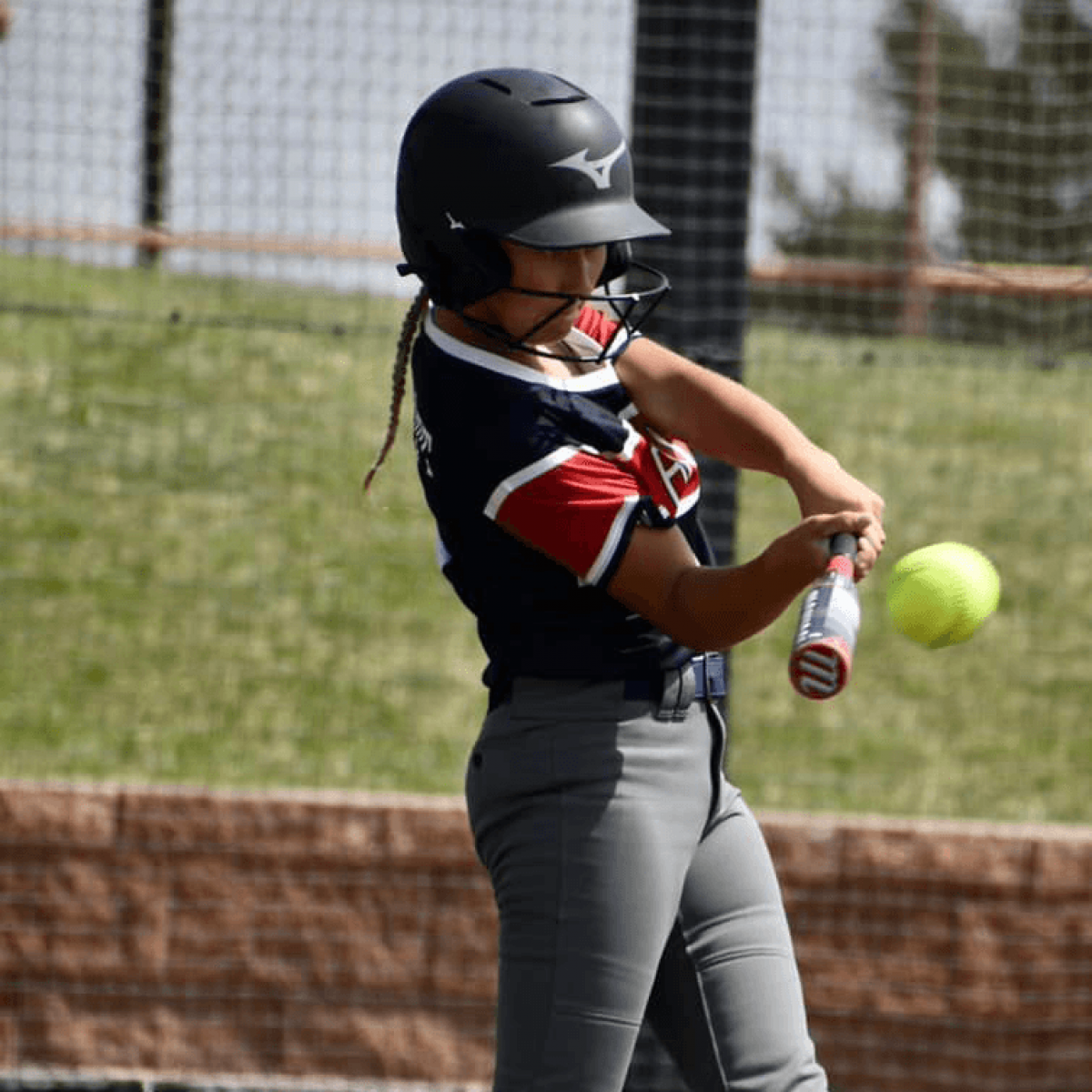 The Rivals 12U softball team consisting of mostly Eads players with an addition of one player from Kit Carson and one other from Wiley had already won the Miss Kitty Tournament at Legends Park in Dodge City, KS in late May. Over the weekend they entered the DC Super C 12U Tournament first winning their pool going 3-0 on Friday and Saturday and then finished in second place overall in the Sunday tournament bracket.

The pool play was perfect for the 12U Rivals as they won all three contests including a 4-2 win over the Venom 12U from Oklahoma, the eventual champions, a 8-2 win over the Redhawks, and a 15-0 major decision over the 12U Hays Hustle.

The first game was against the toughest team in the tournament. The Venom 12U had a very good pitcher and strong defensive players. This was a close contest that had the Venom jump out ahead after the first inning leading 1-0 as the meat of the order for the Rivals went down.

However, in the second inning, the Rivals had seen the Venom pitcher once and managed to adjust to the deceptive rise ball she threw. The Rivals scored three runs in the top of the second inning. Mia Crow started the run with ground ball double to third base. Peyton Eder then walked to put two aboard. With one out, Aspen Nelson pulled a walk juicing the bases. Aubrey Mitchek then grounded out to second base but not before she scored Crow. Romi Hoyt then came to the plate and hit a ground ball to left field scoring both Eder and Nelson.

The Rivals would get a security run in the top of the third inning when Reese Barnett drew a walk with one out. Barnett would steal second into scoring position. With two outs Barnett took a huge lead at second and the pitcher went after her throwing the ball to second but Barnett delayed steal to third and the shortstop missed the throw allowing Barnett to round third and score on the error.

The Rivals only managed four hits against the strong pitcher from the Venom. Emma Wollert, Mia Macias, Crow and Hoyt each got a hit. Hoyt and Mitchek each registered an RBI. Hoyt, Barnett and Kraft each had a stolen base.

Macias got the win in the circle with the key being she didn’t walk a single batter. She would give up 7 hits, two runs and struck out 5 batters.

The Rivals then played their second of three pool games on Friday night against the Redhawk team. Neither team scored in the first inning, but the Rivals got things rolling in the second inning scoring three runs. The Redhawks answered in that same inning with 2 of their own.

In the top of the second both Kraft and Crow came aboard on a hit pitch and a walk. With one out Elizabeth Kent loaded the bases with another walk. Kraft would eventually score on a passed ball. Nelson juiced the bases for a second time with a walk.

Mitchek then came up and hit a hard ground-ball single to shortstop scoring Crow. Emma Wollert hit a fielder’s choice as the Redhawks were able to get Kent at home for 2 outs. With Macias at the plate, Nelson was able to score on a passed ball for the third run of the inning.

But it would be the top of the third that blew the game open as the Rivals scored their allotted 5 runs per inning putting the score out of reach for the Redhawks to stage a comeback.

In that top of the third Barnett started things out with a ground ball single to third base. With one out Kraft singled to left field bringing Barnett home. Crow then sent a shot to third base and arrived on an error by the third baseman. Kraft would score on the play, while Crow got around clear to third base. Eder then pulled a walk and Kent was again hit by the pitch loading the bases for the Rivals. Crow scored on a passed ball and Eder also scored as the Redhawks pitcher was working on Nelson.

Nelson would eventually walk. Mitchek again singled to get on base. Wollert then singled on a ground ball to third scoring Nelson. That would end the run limit and the game with another Rivals victory.

The Rivals had 5 hits including hits coming from Wollert, Barnett, Kraft, and two from Mitchek. Mitchek, Kraft and Wollert had an RBI apiece. Wollert and Barnett stole two bases apiece, while Eder, Nelson and Kraft each had a steal.

Barnett took the win throwing a no hitter in the circle but gave up 2 runs on 4 walks, striking out 5 batters.

The Rivals’ bats were on fire in the final pool play on Saturday against the Hays Hustle 12U team winning 15-0. The Colorado team would score the maximum runs, five, in all three innings holding the Hays group to no runs.

Macias was in the circle for the Rivals getting the win by giving up just a single hit, allowing no runs, walking 2 and striking out 5 batters.

Macias got things started in the top of the first inning with one out by hitting a triple into left field. During Barnett’s at-bat Macias scored on a passed ball. Barnett would walk and then steal second base. With two outs Kraft was hit by the pitch joining Barnett on the base pads. During Crow’s at-bat Barnett stole third and then came home on a wild pitch. Crow walked. Eder then singled on a ground ball to center field scoring Crow. Kent tripled to left field and brought in Eder for the final score of the first inning.

The second inning saw Mitchek and Wollert pull walks. Macias then tripled to left field bringing in both baserunners. Barnett then did one better bringing in Macias on a powerful hit to the fence in left-center field scoring an in-the-park home run. The Hays group then switched their pitcher, but on the first pitch to Jordynn Turcotte, she too blasted a shot to the exact same spot scoring a back-to-back in-the-park homerun for the Rivals. That was the maximum 5 runs and the Rivals had to end their assault.

The Rivals pounded out 11 hits in the game with Macias, Barnett and Eder each having two hits. Barnett added 4 RBIs while Macias, Turcotte, Eder and Kent all got 1 RBI apiece. The Rivals had 13 stolen bases with Eder and Mitchek stealing 3 apiece, Wollert and Crow grabbed two, and Barnett, Kraft and Macias added one each.

On Sunday the tournament bracket was in effect and the Rivals had a high seed having to play the Hays Hustle again. This time they defeated the Hustle 11-3 and advanced to the tournament semifinals.

The Rivals scored their allotted 5 runs in each of the first two innings and add one more in the bottom of the third inning.

They would rack up 8 hits in the game with 2 apiece coming from Barnett, Turcotte and Kraft. Nelson and Wollert each had one hit. Barnett and Turcotte each had 2 RBIs. Turcotte had a strong day hitting a double and her second home run of the tournament. Eder, Mitchek, Wollert, Nelson, Macias and Barnett all had one stolen base in the contest.

The win advanced the Rivals into the semifinals against the Colorado Warriors 12U team who had won the other pool. The local girls brought home a strong 10-2 victory and advanced to the tournament championship.

Against the Warriors, the Rivals used the first and second innings to win the game scoring the maximum 5 runs in each inning. They would give up 2 runs to the Warriors in the top of the third inning.

In the bottom of the first Wollert started off the 5-run spree with a walk. Macias was hit by the pitch, and Barnett pulled another walk to load the bases. During Kraft’s at-bat both Wollert and Macias scored on passed balls. Barnett would then steal third and then home on the same play. Kraft then walked. Crow singled scoring Kraft. Eder pulled a walk and Crow went to second base. Nelson then walked and loaded the bases for the second time in the inning. Crow would then score with Kent at the plate on a passed ball to end the at-bat.

The second inning 5-run series began with a walk by Kent and another for Mitchek. Kent then scored on a Wollert single to shortstop. With one out Barnett pounded out a double with bases loaded scoring Mitchek and Wollert. Barnett then scored again by stealing third and going home on the error at third. Turcotte then came to the plate and hit her third in-the-park home run of the tournament. That put an exclamation point on the inning for the Rivals.

It only took the Rivals 4 hits to score 10 runs coming from Wollert, Barnett, Turcotte and Crow. Barnett had 2 RBIs. Wollert and Barnett each had 2 stolen bases and Macias added another.

Barnett took the win in the circle going three innings and giving up three hits, 2 runs, walking 4 and striking out 2 batters.

The win over the Colorado Warriors pitted the Rivals against the Venom 12U, the first team they had played in pool play. This is a strong team with extremely fast and aggressive base runners. In order to win, the Rivals would have to be at the top of their game.

Macias was in the circle for the Rivals and held her own in the first two innings but too many walks and errors by her defense finally broke the game wide open for the Venom. The score was tied 1-1 after the first full inning and no one scored in the second inning. But going into the third and fourth innings it looked like the Rivals ran out of gas in their third game of the day, as the Venom turned up the pressure on the base pads scoring 3 in the third and 4 runs in the fourth to secure the championship win.

The Venom pitcher only gave up one hit to Barnett who hit a triple in the bottom of the first inning with Macias aboard. Six Rivals struck out.

Macias took the loss in the circle going the distance in 3.2 innings of work. She would give up 7 hits and 8 runs, walked 5 and struck out 2 batters.

Reese Barnett was named the Tournament MVP for her efforts at the plate, as well as her defensive contributions catching and pitching for the Rivals.

Throughout the three-day tournament the local Rivals 12U players learned a great deal about themselves and what it takes to compete at a high level of play. Overall, it was a tremendous tournament experience, and except for two innings, they played exceptional ball for 11 and 12-year-olds.