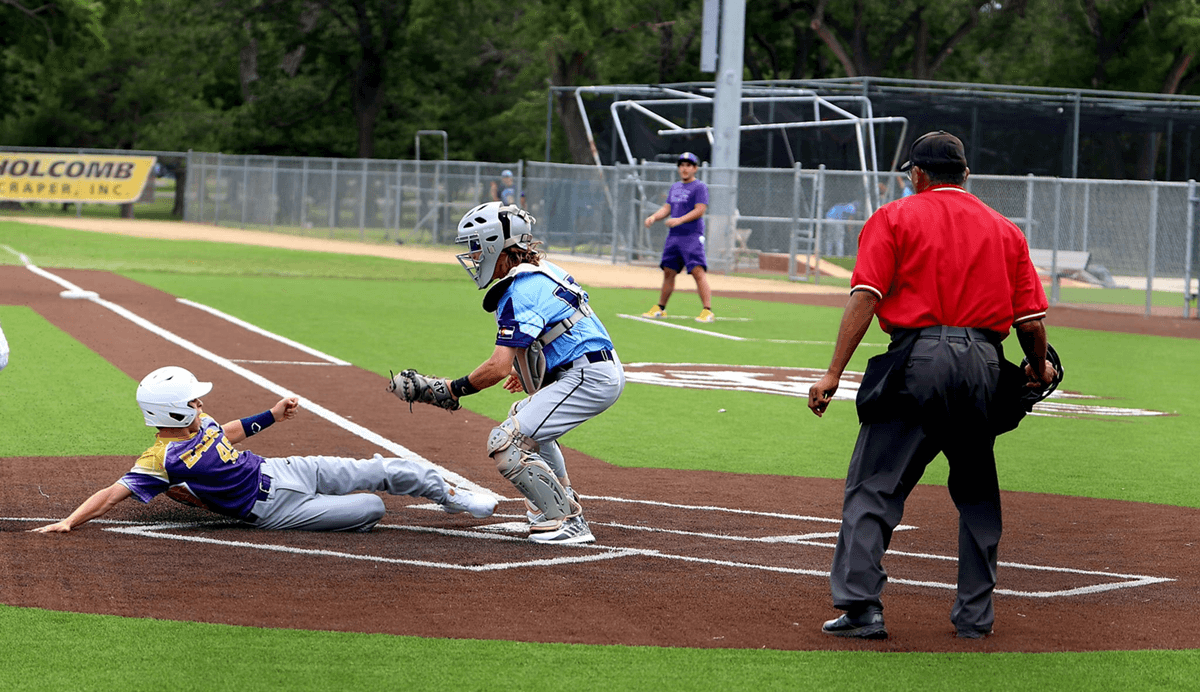 Shaine Winder slides in safely against Widefield at the Jim Clanton Memorial Tournament in Garden City on Saturday.

The summer is halfway over and finally the Eads 16U Baseball Team was able to get to a major tournament in Garden City, KS over the weekend competing in the Jim Clanton Memorial Tournament. Although they were a little rusty, the group, consisting of players from Eads and a couple of Kit Carson boys, got some good playing experience at this level. This level of competition is what they need to develop as individual players that could equate to a strong team in next year’s high school season.

The Eads Eagles 16U team lost two games and tied one at Garden City. They first lost to Widefield, 7-1, on Saturday, but then tied Lamar in pool play, 5-5. Those results set the team up against the Elkhart All Stars for the first round in the Sunday bracket where they would lose that contest 12-5 to eliminate them from the tournament after the loss in the quarterfinals.

Widefield would scatter 8 runs around the field while the Eads boys managed 3 hits. Those hits came from Mason Marriott, Bryson States and Stockton Mitchek. Shaine Winder, in the one hole, scored the only run for the 16U group.

Stockton Mitchek had 3 stolen bases, while Winder added two steals, and States and Gabe Hadley-Valdez each had one steal.

The key to this first loss was the 6 errors committed by the Eads defense.

AJ Hough was on the bump for the Eads 16U team going 4 innings and giving up 8 hits, 3 earned runs, walked 2 and struck out 2 batters. States came in relief for one inning giving up no hits, no earned runs, and walked one.

The Eads Eagles 16U then played Lamar to a 5-5 tie in pool play later in the day. Eads tied the game on a groundout in the fourth inning.

Lamar got on the board in the first inning when Daniels drove in one run. The Eads 16U then knotted the game up at five in the bottom of the fourth inning when Jayson Bletzacker drove in a run. In that inning the Eads group had the bases loaded when Case Nelson, then AJ Hough, and finally Spencer Uhland all pulled walks. Nelson then got caught off base for one out. Bletzacker then grounded out to first but on an errant throw Hough would score.

After that vital run, the pool play time was up and the two teams had to settle for a tie.

Lamar would have 4 hits while Eads mustered up 3 hits in the contest.

No other stats were available for the Lamar contest.

The results of the pool play pitted Eads into a tough position for Sunday’s quarterfinals game as they drew one of the top teams in the tournament in the Elkhart All Stars. Eads would be eliminated from the tournament with a 12-5 loss to Elhart.

Elkhart got on the board first in the first inning with one run. Eads came back in the top of the second inning and tied things up at one apiece when Uhland singled on a 1-2 count, scoring one run. In that inning Johnny Vasquez started the at-bat with a single. With one out Nelson moved Vazquez on a bunt that turned into a single toward third base. Uhland then hit a strong ball singling past shortstop and scoring Vasquez.

But Elkhart pulled away for good with four runs in the third inning using a triple to do it. They would also score 4 more in the bottom of the sixth inning.

Elkhart had 9 hits and Eads did keep pace with 7 hits. 12 errors were assigned to Eads.

States was the only baserunner that added a stolen base.

Nelson was on the hill for Eads and went the 6 innings giving up 9 hits and 4 earned runs, walking 1 and striking out 7 batters.

The team was coached by Chance Fowler and A.J. Vasquez helped by coaching first base in Kansas.