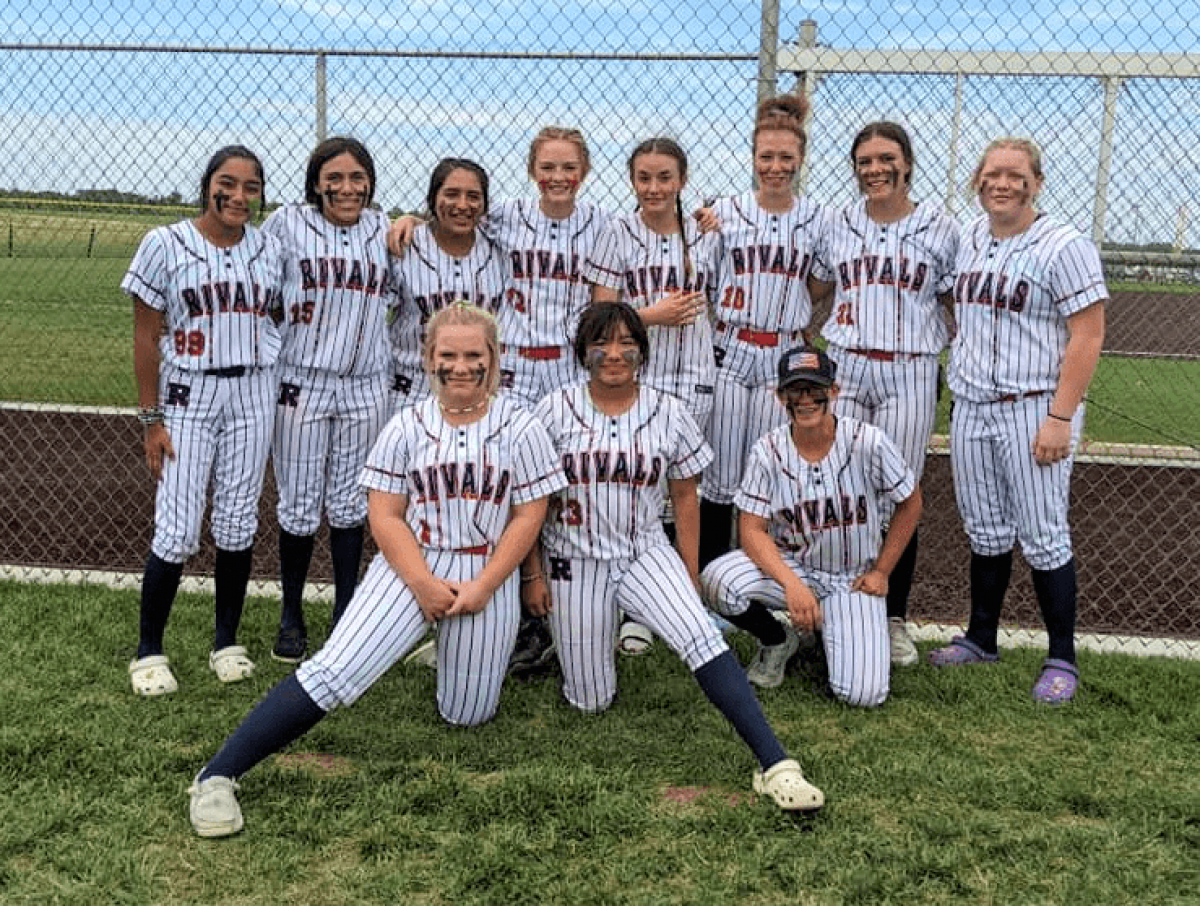 The 14U Rivals softball team consisting of players from Eads, Wiley, McClave and Lamar traveled to Hays, KS last weekend to compete in the Western Kansas USSSA State Championships and lost only two games in the 2.5 days of tournament competition where the team played a total of 7 contests before losing out in the semifinals.

The group had one pool game on Friday night losing a nail biter to the Thunderz 14U team, 7-8. But on the next day, on Saturday, the girls buckled up and displayed great tenacity going perfect on the day and getting four impressive wins. That’s a lot of softball!

On Saturday the Rivals first defeated the Flames of Nebraska 14U, 6-4. In their second game of the day they took care of the Slammers, 10-2. The third game saw them get the best of the Hays Hustle 14U team, 7-2; and in the fourth game on Saturday, they duplicated that effort with a 7-2 win over the Extreme Softball 14U.

That kind of performance on Saturday put them in a good spot for Sunday’s bracketed tournament where the local Rivals got the exciting quarterfinals win, 3-2, over the Steam 14U. Finally, they would bow out of the tournament losing in a well-played 8-5 loss to the Wichita Rebels 14U in the semifinals.

In the first game of the tournament on Friday night against the Thunderz 14U, it came down to the last play of the game. The Thunderz 14U trailed 7-6 going into the bottom of the sixth and final inning and were able to put two across with the final run coming on a squeeze bunt at home.

This was a closely matched contest as the Thunderz had 9 hits to the Rivals 8 hits. The difference in the contest came down to the 5 errors committed by the Rivals.

The team had 7 stolen bases with one apiece from Weeks-Johnson, Penaflor, Salcedo, Wilson, Savanna Brown, Bitner and Sierra.

Sierra started in the circle and went 1.1 innings of work giving up no hits, 2 earned runs, 8 walks and had 3 strikeouts. Penaflor finished the game for 4 innings giving up 9 hits, 1 earned run, 2 walks and struck out 4 batters.

The next day the Rivals 14U grabbed the lead in the third inning against the Flames of Nebraska 14U and came away with a 6-4 win.

The game was tied at four with the Rivals batting in the bottom of the third inning when Wilson singled on a 1-2 count scoring Salcedo who had tripled to left field and pushed Bitner across the play before.

The Rivals 14U also got a homer from Lexi Shotton who launched one in the first inning.

The Rivals tallied up 11 hits on the day with Shotton and Wertz collecting multiple hits. Shotton went 3-for-3 at the plate, while Wertz was 2-for-2. The Rivals scattered 11 hits in all around the field with hits coming from Sierra, Bitner, Salcedo, Wilson, Penaflor and Weeks-Johnson. Doubles came from Sierra and Shotton, and triples came from Shotton and Salcedo. RBIs came from Shotton with 3, and one apiece from Salcedo, Wilson and Penaflor. Wertz scored two runs while Shotton, Sierra, Bitner and Salcedo each scored one run apiece.

Just Bitner caused havoc on the bases getting 2 steals.

Penaflor got the win in the circle going 4 innings and giving up 8 hits and 4 earned runs on 2 walks. She would strike out 3 batters.

The second game on Saturday was against the Slammers and the local girls had a big day at the plate with 8 hits. Another key to this 10-2 win was Sierra’s work in the circle as she went the distance in 3 innings having a no hitter and allowing 1 earned run. She walked 4 batters and struck out 5.

The Rivals had 4 stolen bases coming from Penaflor, Martinez, Shotton and Sierra.

Next on the descruction list was the Hays Hustle 14U as the Rivals controlled them 7-2. The Rivals opened up the scoring in the first inning when Salcedo singled on a 3-2 count scoring Shotton. Three more runs would come across in that first inning.

Shotton got the ball rolling with a double and Bitner joined her on the base paths after being hit by the pitch. Sierra then walked juicing the bases. Salcedo’s fielder’s choice to third base scored Shotton but caught Bitner. With Sierra and Salcedo on base Wilson tripled to right field scoring both base runners. Wilson then scored on a ground out by Martinez.

The Rivals tallied 11 hits in this game. Salcedo, Wertz and Shotton each collected multiple hits. Salcedo went 3-for-3 at the plate. Shotton and Wertz each had two hits. Sierra, Wilson, Penaflor and Weeks-Johnson each added a hit apiece. Doubles came from Shotton and Wertz and Wilson had the triple.

Bitner and Shotton each stole one base in the contest.

Penaflor got the win in the circle with a complete game going 5 innings and giving up 4 hits and 2 earned runs. She would walk 3 and strike out one.

The final game of the day on Saturday during pool play came against the Extreme 14U group where the Rivals duplicated their winning score 7-2. In that contest the Rivals got their offense going right away in the first inning as the lead off batter Shotton hit a single to left field. With one out Sierra singled on a line drive to third base. With Salcedo at the bat Shotton stole home and Sierra moved to third safely on an error by the third baseman. Salcedo would then single scoring Sierra. With two outs Martinez singled to shortstop scoring Salcedo.

The Rivals scored in every inning and held the Extreme out of the scoring column until the bottom of the fourth inning where they got 2 across trailing 7-0. But that would not be enough, and the Rivals celebrated a perfect day on the field.

The Rivals had 11 hits coming from Sierra and Martinez with two apiece and one from Shotton, Bitner, Salcedo, Penaflor, Brown, Wertz and Weeks-Johnson. Weeks’ Johnson had a double while Wertz tallied up a triple. Shotton added 2 stolen bases.

Sierra took the win in the circle going 2.2 innings allowing no hits, no runs, walking 4 and striking out 3. Penaflor closed the win with 1.1 inning of work giving up 3 hits and 1 earned run, walking one and striking out one.

In the tournament quarterfinals on Sunday the Rivals were pitted against the Steam 14U and came away with an exciting 3-2 victory. The Rivals would take the lead late in the game. In the top of the fourth inning the scored was tied 2-2 when Martinez singled on a 1-2 count and scored Wilson to get the lead.

In that final at-bat Sierra started things off with a double to center field. She would then steal third base during the next at-bat. With one out, Wilson came to the plate and pounded out a double past third base scoring Sierra. That set up Martinez’ RBI single to Wilson.

The Rivals had 9 hits in the game including 2 coming from Bitner. Shotton, Sierra, Wilson, Martinez, Penaflor, Brown and Weeks-Johnson each had one hit apiece. Runs came from Sierra, Wilson and Brown.

Sierra, Wilson and Bitner each had doubles in the contest. Sierra also grabbed that key stolen base.

Penaflor got the win in the circle with a complete 4-inning game by giving up 3 hits, 2 earned runs, walking 5 and striking out 2.

The win set up the semifinals against the Wichita Rebels. It was a close back-and-forth game through three innings until the bottom of the fourth inning when the Rivals saw the game slip away. With the score tied 3-3 after three innings, the Rivals challenged the Wichita group in the top of the fourth getting a run across. Wilson got on base with a single just past first base, moved to second when Martinez drew a walk, and then moved to third on a Penaflor single. In some confusion caused by Penaflor at second, Wilson was able to steal home to get the 4-3 advantage.

Unfortunately, the bottom of the fourth inning broke out 5 runs for Wichita and although the Rivals managed one run in the top of the fifth it was not enough as they were eliminated out of the tournament, 8-5.

Wichita tallied 7 hits and the Rivals had 6 in the contest. Neither team committed an error.

Wertz had two stolen bases while Wilson and Bitner each grabbed one.

Dixie Bitner was named the Tournament MVP as the dynamo for the Rivals was behind the plate catching Penaflor and Sierra for seven games.

The Rivals 14U is scheduled for one more tournament in mid-July as they will travel to the Mountain States C Championships in Loveland.