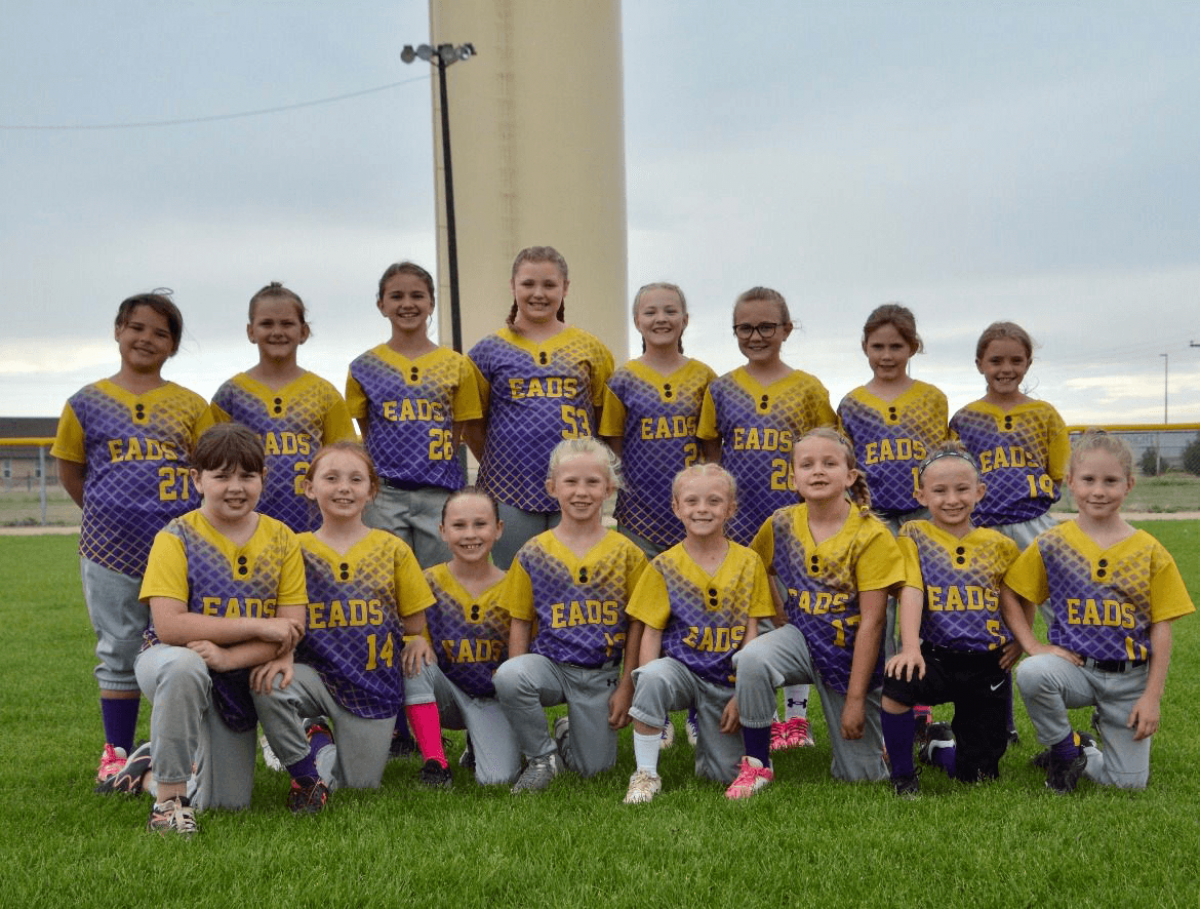 After playing five games in one week the Eads 10U softball team entered the Lamar Babe Ruth 10U League Tournament and was upset in extra innings by Wiley, 17-13. The day before, the team had tied Lamar’s Sweet Cleats, 12-12, in the final game of the regular season. That finish was enough to seed Eads #3 in the 8-team tournament that began the next day on Wednesday.

In the Tuesday seeding game, the Sweet Cleats tied the game on a stolen base in the third inning.

Eads 10U had opened up the scoring in the first inning when Decca Brown drew a walk, scoring one run.

Miranda Keplar led the Eads 10U with one hit in one at bat. The Eads girls tore up the base paths as 12 players stole at least two bases. Brown had five stolen bases.

Kent pitched four innings giving up 6 hits and 12 runs on 7 walks and 8 strikeouts.

Eads (#3) and Wiley (#6) played for six innings before Wiley took over the game in the top of the sixth inning in the first round of the tournament on Wednesday.

In that inning, Trosper walked and then Marley Zimmerman followed with a walk. During Zimmerman’s at-bat Trosper would get around and score. Bletzacker then hit a single to third base.

With one out, Kent hit a double to the pitcher allowing both Zimmerman and Bletzacker to score. With Hollis at the plate Kent stole third and then home for the fourth run of the inning.

Eads didn’t hold the lead for long as in the top of the fourth inning Wiley exploded for 7 runs and gained the lead back, 12-6. In the bottom of that same inning the Eads 10U did not score.

Eads would manage to hold Wiley off in the top of the fifth inning and it was then down to their last at-bat in the bottom of the fifth. In that inning Eads rallied for 6 runs to tie the game, 12-12, and send it to extra innings.

In the bottom of the fifth Trosper started the Eads girls off with a single to left field. Bletzacker followed suit by singling to shortstop. Brown then walked loading the bases for Kent who singled on a ground ball to the side of the pitcher and scored Trosper, Bletzacker and Brown.

Hollis then singled to the pitcher with one out and Kent on third base. On the play Kent would score.

McKinzie Jones then walked with Hollis at third base. Presley McLoud then singled on a ground ball to third base scoring Hollis.

During Uhland’s at-bat Jones came home and McLoud moved to third base. Paitin Jones then singled on a bunt toward the pitcher, but McLoud would be out coming home on the squeeze play. Eads had Uhland on third but couldn’t get her in.

With the score tied 12-12 Eads couldn’t hold off 7 runs scored by Wiley.

The Eads group would come back in the bottom of the sixth inning trailing 17-12 and only managed one run losing the game. That lone run would come from Bletzacker who walked to start the inning and then stole second, third and home during the next two at-bats.

Kent would end up leading the way at the plate with 3 hits, while Hollis and Bletzacker each had two hits. Paintin Jones, McLoud and Trosper each had one hit.

Kent and Bletzacker each scored 3 runs, while McKinzie Jones and Trosper scored two apiece. Brown, Hollis and Zimmerman each scored once.

McLoud took the loss in the circle by working through 6 innings and giving up 10 hits, 17 runs, 14 walks and struck out 9 batters.

Summer ball is now finished for the Eads 10U softball group. They had some good success this year with mostly younger players chalking up a 9-5-1 record.