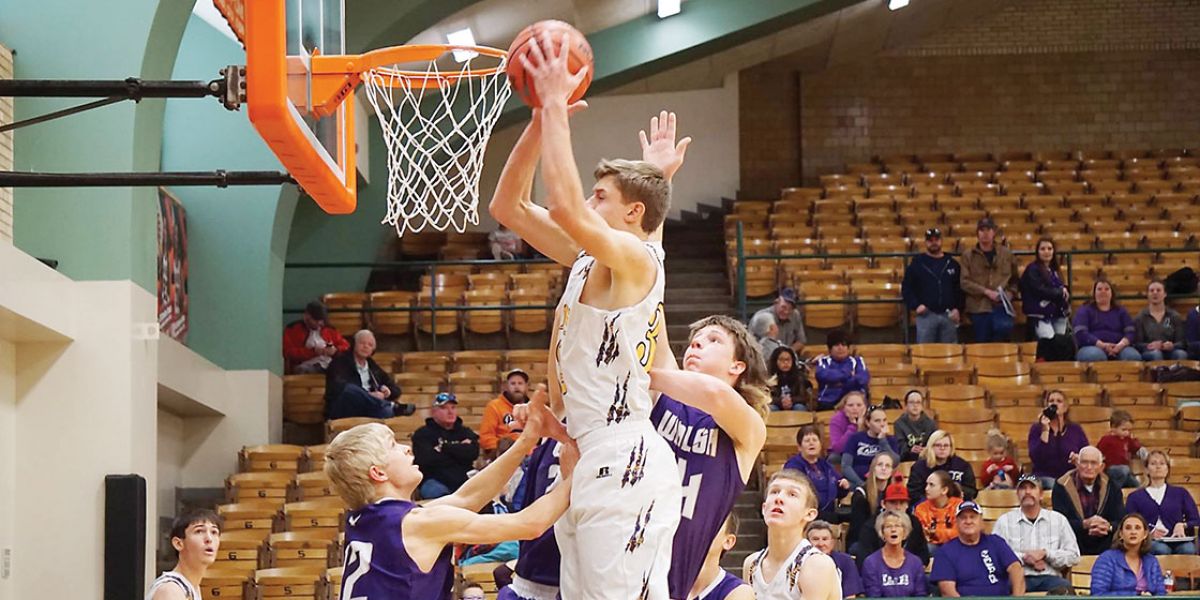 The Eads Eagles entered the much-anticipated Lamar Holiday Tournament seeded #2 in the bracket with a 3-0 record.  However, Eads struggled to match up against a decent McClave (#7) team in the opening round and lost a barnburner, 48-42.  McClave went on to win the 3rd place game on Saturday night.  Eads was forced over to the consolation side of the bracket and took on Walsh in the semifinals losing, 64-57.  That loss moved them to the last place game on Saturday morning where they beat Springfield by a single bucket, 38-36, to gain a little redeeming value out of the tournament.

The story of the game on Thursday against McClave was cold shooting and the fact that Eads struggled with confidence when they needed it.  They had a couple of opportunities to put the game away but failed to do so.  In the McClave game the first quarter was the deciding factor as the Eagles got behind 14-8 after that period.  Early in the period 6’4 Caden Parker controlled the Cards’ big guy Jake Trujillo, blocking him and sending the ball down the court to Fred Turner on a nice cherry-picker layup tying the game at 4 apiece.  McClave then went on a five-point run as Eads shot themselves out of the first quarter, and hot-shot Card senior Steven Weber hit a three-ball, his only one of the game, with seven seconds to go in the first period.  Eads struggled into the third quarter offensively, but their defense was tough as they held the Cards to just six points in the third period.  Into the fourth period, Eads was trailing 33-25 midway through and it looked like it was all but over when Parker ignited his team and the crowd with a strong jam coming down the lane.  Eads pressed McClave and made things happen down the stretch.  Parker got Eads to within two points late in the game with a steal and a layup off the press.  Turner then stole the ball with .32 seconds left and pushed hard for the layup that would have tied the game, but it was not to be as the ball rolled out and McClave recovered.  Eads had one more chance to tie the game on an inbounds play with just seconds left but threw the ball away. 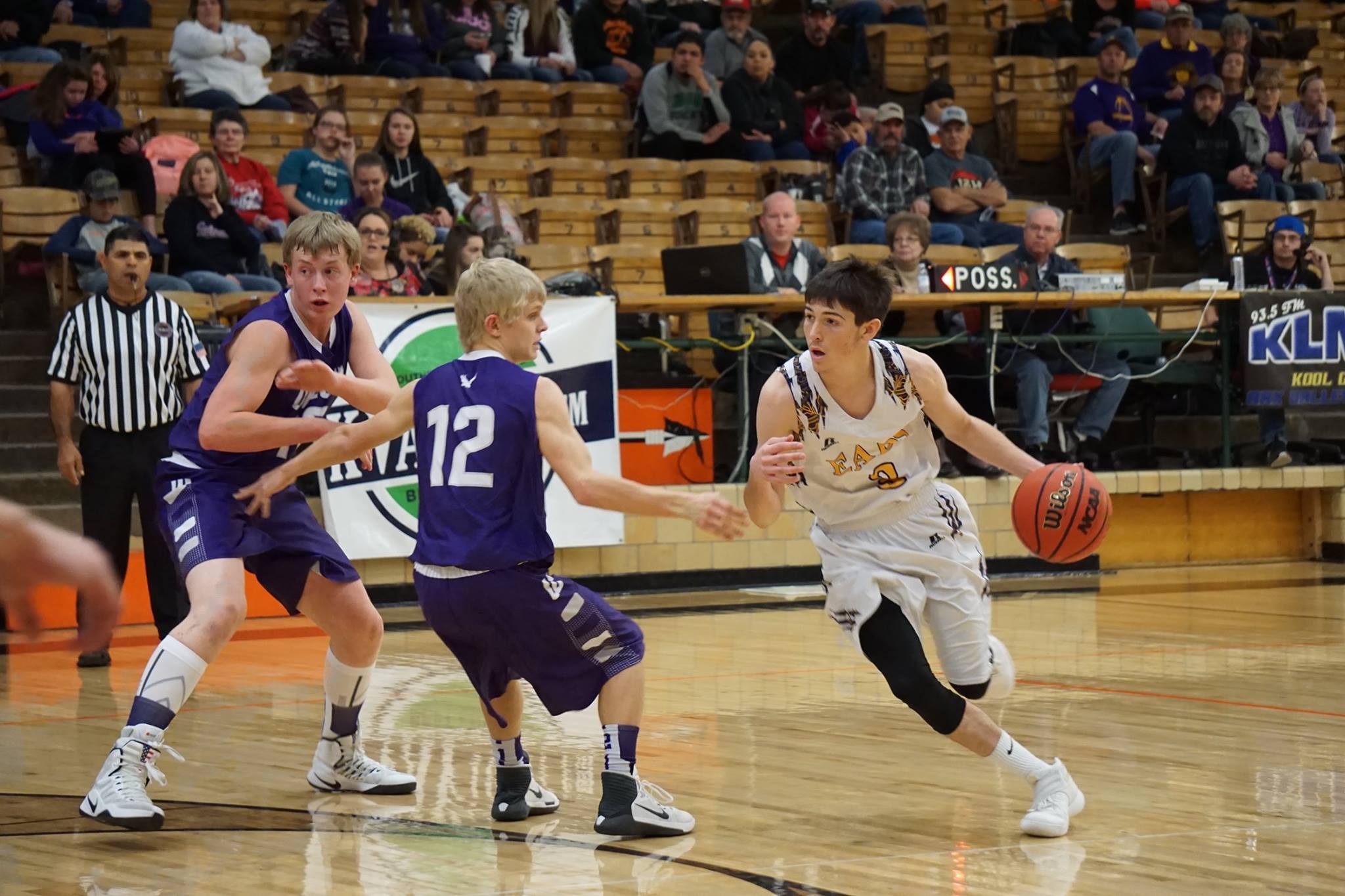 Parker put in a tremendous game as the senior ended up with a double-double hitting for 22 points and 11 rebounds.  He would also be a force in the paint with 9 blocks and 5 assists.  Turner added 11 points to the Eads tally.

The loss moved Eads down to the consolation bracket where they would take on Walsh in the semifinals.  Eads had defeated Walsh in their home opener two weeks prior but knew it would be a tough game.  This was a high scoring game as Parker and 6’ 5 Thomas Manuel would go at it inside the pain.  Eads would have the advantage after one period leading 16-12.  However, Walsh gained the advantage in the second quarter as Eads led late in the second; however, Manuel caused some late-second problems for Eads, and Walsh would go to the lockers leading by one, 27-26.  Eads really did play well but got some tough breaks starting in the second half.  First, Parker got in foul trouble and was forced to sit for the entire third period.  This gave Walsh’ Manuel a definite edge although Trey McDowell, Parker’s replacement, did an exceptional job battling with the bigger post.  Next, came an ankle injury to Turner who was forced to sit for a lot of the quarter and when he was in was limited in his mobility.  The game was lost in the third period towards the end when a rash of turnovers by Eads resulted in points for Walsh.

Eads went 11-for-12 from the free throw line but Walsh was on the line more.  Parker scored 24 points and pulled down 8 rebounds for Eads, while Manuel had 25 points.  Turner had a great game despite his injury putting in 13 counters including a couple of three-balls, and Stephen Wilson had 9 points including two long balls and also contributed 4 assists to the cause.

With the disappointing loss to Walsh Eads had an early morning game against Springfield, yet another team that Eads had beaten in the regular season.  This time Turner didn’t play as he suffered a severe sprain to his ankle.  This was a close contest throughout until Eads made a run midway through the fourth quarter when Damian Hernandez hit a field goal to make the score 30-26 and then Parker swatted one into the trash cans on the Walsh side.  Walsh promptly turned the ball over to Parker on the steal who went ahead to Zach Haase for a layup and the biggest lead of the night for Eads, 32-26.  But Springfield would come back and make it a game to the end.  However, Haase had a game-winning layup with 15 seconds left off of a Parker assist.
Parker again led Eads with another double-double hitting for 15 points and pulling down 11 rebounds.  Haase had 10 boards.

It’s now the Holiday break and the battered and bruised Eads boys can take a little break before they get back in the gym to begin the bulk of their season starting in January.