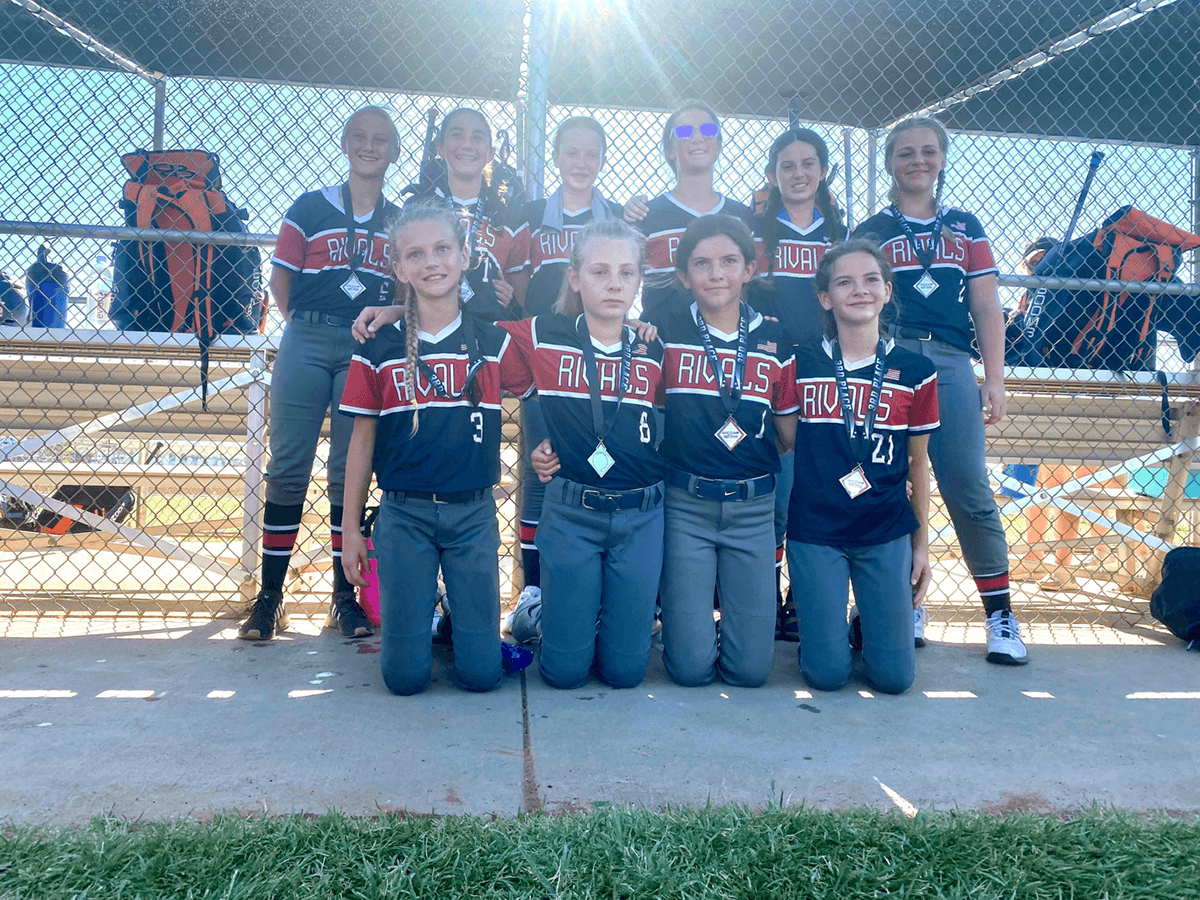 The Rivals 12U team competed in a massive 19-team tournament in Hays, KS and came away with the third place medal as they lost the semifinal game to the eventual champions in a walk-off home run by the Manhattan Diamonds. The team played 7 games over the weekend. Pictured are (front l to r) Emma Wollert, Elizabeth Kent, Peyton Eder, Aubrey Mitchek (back l to r) Reese Barnett, Mila Macias, Aspen Nelson, Jordynn Turcotte, Mia Crow, Lacie Kraft.

The local Rivals 12U softball team consists of players mostly from Eads with an additional player from Wiley and one from Kit Carson. Over the weekend the Rivals 12U competed in the biggest tournament of the summer thus far in Hays, KS as part of the 18-team field in the Battle on the Plains USSSA Tournament.

In the three-day tournament the Rivals 12U came away with a 5-2 tournament record and third place.

They would defeat Kansas Heat 12U in a come-from-behind win, 4-3, in their first game on Friday night. Then in their back-to-back contest on Friday they could not overcome a dismal first inning losing to the NW EXTREME, 7-2. The team then stayed undefeated throughout the two games on Saturday grabbing wins over the Hays Hustle 12U, 11-1 and the Colorado Wild Nelson 12U, 8-3. Finally, on Sunday they won their early morning game over the Quicksilver 11U, 7-0, and advanced into the semifinals with a win over the Salina Spark 12U, 4-0.

They were finally stopped by a walk-off homerun late in the game by the Manhattan Diamonds 12U who won the semifinals against the Rivals, 2-0, and eventually won the entire tournament.

A walk-off single led the Rivals 12U past the Kansas Heat 12U, 4-3 on Friday evening. The game was tied at three with the Rivals batting in the bottom of the fourth inning when Aspen Nelson singled on a 1-0 count scoring Peyton Eder who streaked around the bases from first base to home to win the contest.

After allowing the KS Heat to take the lead, 3-0, after the top of the second inning, the Rivals came back in the bottom of the third inning to collect 3 runs and tie the contest for the dramatic finish.

In the bottom of the third, the Rivals were down to two outs after the first two batters. The top of the order came up in Emma Wollert who pulled a walk. Mila Macias then singled past shortstop moving Wollert to second base. Reese Barnett then came up and doubled to right-center field scoring both Wollert and Macias. Jordynn Turcotte pushed Barnett home on a line drive past third base.

The Rivals manufactured 5 hits with two coming from Barnett, including a double, and one coming from Macias, Nelson and Turcotte, with a double. Barnett had 2 RBIs, Turcotte added an RBI, and Nelson had the game-winning RBI to Eder.

Barnett took the win going the distance in the circle and working through 4 innings, giving up 3 hits and 3 runs, walking 6 and striking out 3.

The Rivals struggled against the NW XTREME pitcher as they only mustered one hit in the next game on Friday night losing 7-2. The XTREME scored 5 runs in the top of the first after the Rivals could not get their defense on track.

The Rivals then answered in the bottom of the first with two runs but that’s all they could muster. In that inning, Wollert drew a walk to start the at-bat. Macias grounded out but moved Wollert to second. With two outs Turcotte doubled to left field scoring Wollert. On the play Turcotte pushed to third and forced and error allowing her to score as well.

Only Turcotte managed to get a hit for the Rivals, a double, and also handed out an RBI.

Macias started the game but couldn’t find the strike zone going .1 inning before handing the ball to Wollert who threw for 1.1 innings. She would give up 3 runs on two hits, walked 3 and struck out two.

On Saturday the Rivals grabbed two nice games. In the first of the day against the Hays Hustle 12U the Rivals scored 5 runs in the first and 5 more in the second to put the game on ice.

In the top of the second inning, the Rivals scored 5 more runs. With one out, Aubrey Mitchek walked, and Wollert followed suit putting two aboard. Macias then walked loading the bases. Barnett also walked bringing in Mitchek. With two outs Kraft walked scoring Wollert, and Crow walked scoring Macias.

The Rivals only had one hit with Nelson’s single in this major win but walked 11 times and 4 batters were hit by the pitch.

In the second game on Saturday the Rivals took on the Colorado Wild Nelson 12U and came away with a 8-3 win.

Barnett got the win working a complete game giving up 1 hit, 3 earned runs, 6 walks and struck out 3 batters.

To start the game Wollert walked. With one out Barnett joined Wollert with a walk. With two outs Kraft singled to shortstop scoring Wollert and moving Barnett to third base. Crow loaded the bases when she was hit by the pitch. Eder then singled to first and as the fielder fumbled the ball, she kicked it toward the fence allowing the speedy Rivals to bring three across and Eder came to rest on third base.

In the top of the second inning, Mitchek singled with one out on the field. Wollert walked. Macias then doubled to left field scoring Mitchek and Wollert. Turcotte doubled past shortstop scoring Macias. Kraft then singled and Turcotte scored.

The Rivals had 6 hits in the contest with Kraft having 2 hits and Turcotte and Macias each pounding out a double. Eder and Mitchek each added a hit, as well.

Mitchek had 4 stolen bases, Wollert grabbed 2, and Kraft, Barnett, Turcotte and Macias each had one theft apiece.

Early on Sunday morning the Rivals grabbed their fourth win in the tournament with a 7-0 win over the Quicksilver 11U team from the Colorado front range. Quicksilver is a huge program fielding elite travel teams in all age divisions.

Macias had a superb outing in the circle throwing a complete game shutout and leading the Rivals to a 7-0 victory. She would work through four complete innings giving up 5 hits, no runs, no walks and struck out 2. The defense behind Macias was perfect making 11 defensive put outs.

The Rivals secured the win thanks to a five-inning rally in the bottom of the first inning. To start the inning, Wollert tripled on a line drive to right field. Macias followed with a single past second base scoring Wollert. During Barnett’s at-bat Macias stole second and then advanced to third on a passed ball. Barnett would ground out to second base but would get the RBI for Macias.

Turcotte then arrived on first on a dropped third strike. During Kraft’s at-bat Turcotte would steal second base and then score on an error by the shortstop. Kraft walked. Crow then singled scoring Kraft. With Crow on third and two outs, Nelson singled to second base scoring Crow.

The Rivals had 7 hits in the game with Nelson having 2. Wollert hit a triple. Other hits came from Macias, Turcotte and Kraft. RBIs came from Barnett, Nelson and Crow and 2 from Kraft.

Kraft had 4 stolen bases, Wollert stole 3, Nelson grabbed 2 bases, and Crow, Macias and Turcotte each had one.

Things started to get serious in the quarterfinals game of the huge tournament. The Rivals took on the Salinas Spark 12U team from Salinas, KS in 108-degree temperatures.

Reese Barnett threw a shut out to lead the Rivals to the 4-0 victory.

The Rivals got on the scoreboard first when Wollert hammered out a solo homerun.

Barnett surrendered zero runs on five hits over four innings of work. She only walked one and struck out six batters.

The Rivals scored 3 runs in the top of the first inning.

The only other run manufactured by the Rivals came in the top of the fourth inning when Kraft singled to start the at-bat. Crow walked moving Kraft to second base. Eder pulled a walk loading up the bases, and then Nelson walked brining Kraft home.

The Rivals had 7 hits in the contest with 2 coming from Barnett. Turcotte had a triple and Wollert a solo homerun. Other hits came from Mitchek, Nelson and Kraft. RBIs came from Wollert, Turcotte and Nelson.

Barnett stole 2 bases, while Nelson and Kraft each committed one theft.

The win set up the semifinal contest at 4:00 pm and the temperatures soaring against the Manhattan Diamonds, who eventually won the tournament. This was a loaded and impressive team of top players in the state of Kansas.

The Rivals would lose the heartbreaker on a walk off homerun in the bottom of the fourth inning.

Both teams were strong in the circle as it was a pitching dual between Macias for the Rivals and two Diamonds pitchers who tag-teamed through the four innings of excellent defensive play.

The two teams were scoreless through three complete innings. The Rivals had Barnett, Wollert, Mitchek and Turcotte in scoring position during the contest but could not get them across.

The Rivals had 3 hits coming from Wollert, Barnett and Turcotte. Barnett managed to steal one base. The Rivals’ batters did get the ball in play most of the time, but the Diamonds’ defense was tremendous and held them off each time.

Macias took the loss in the circle but threw a heck of a game. She would give just three hits over the four innings including the walk off homerun by the three-hole batter. Macias only gave up that one earned run, walked just one batter and struck out 2.

The Rivals impressed a lot of people at this the biggest tournament they have ever competed in. They would earn third place individual medals for their efforts. The Rivals had defeated the second place team earlier in the tournament, but the Manhattan Diamonds were a tremendous 12U team to watch.

The Rivals 12U will join their counterparts the Rivals 14U team in their final tournament of the season before schools starts. Both teams will be in the Loveland Tournament next weekend, July 16 & 17.