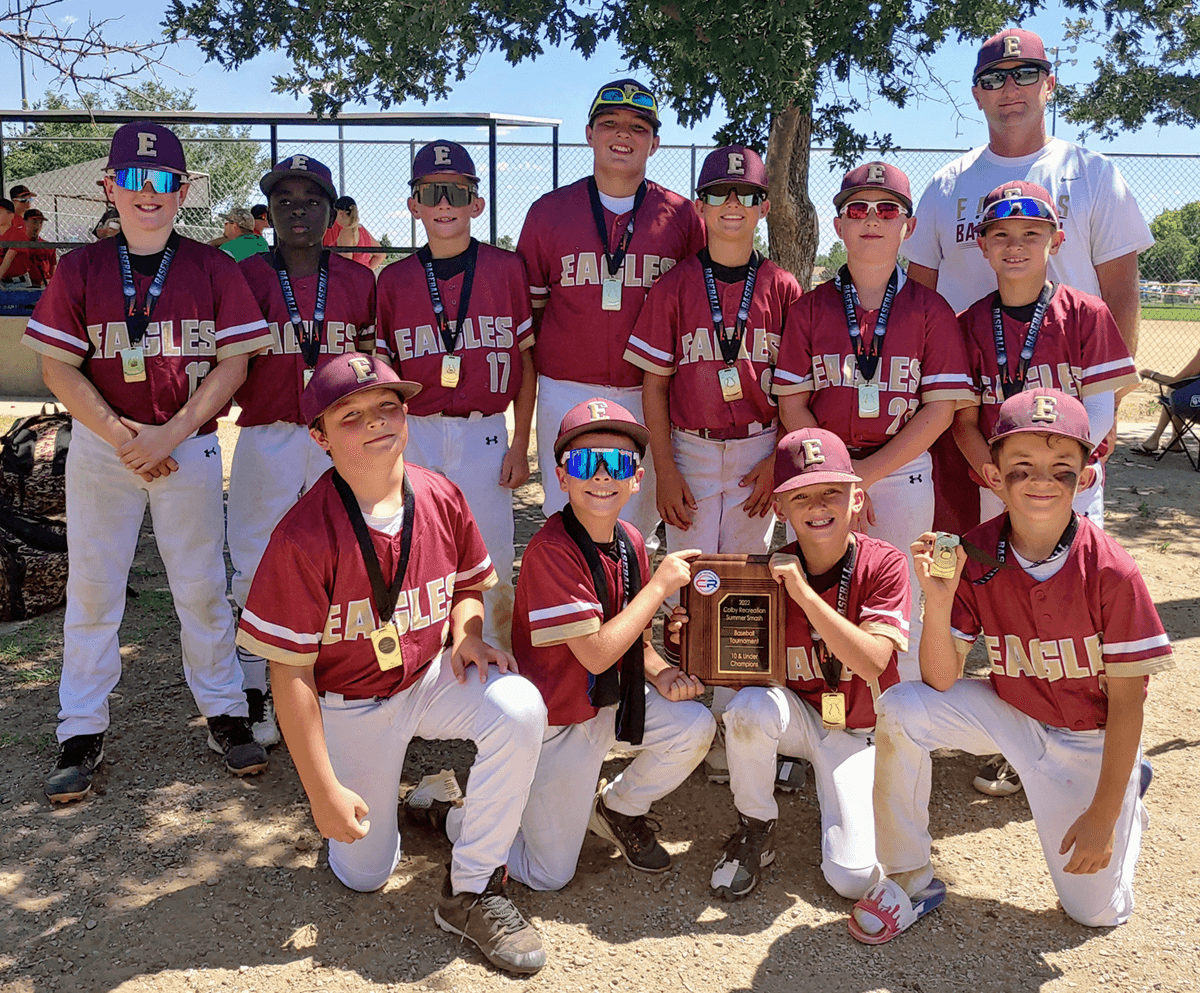 Eagles 10U Baseball Group Grab Another Championship in Colby, KS

In the one-day tournament the Eagles 10U first lost a 4-1 lead and had to come from behind to defeat the Cowboys 10U, 6-5. They then defeated the Thomas County Storm 10U, 15-4, and the Oakley Warriors 10U, 12-3 to grab the championship hardware.

The Eagles 10U defeated the Cowboys 10U, 6-5, thanks to a walk-off single by Liam Eder. The game was tied at five with the Eagles 10U batting in the bottom of the fourth inning when Eder singled on the first pitch bringing Luke Barnett home from second base for the winning run.

The Cowboys scored first in the top of the first inning when an Eagles’ error allowed the first batter of the game on base. But after that initial boggle the Eads boys were solid defensively.

The Eagles 10U held the Cowboys scoreless in the next two innings while they managed some good offensive production of their own scoring two runs in each stanza.

Jaxon Bohlander started the Eagles 10U off with a single in the bottom of the second inning and scored on a single by Will Barnett. Barnett would then steal second, steal third, and then score on an error by the catcher while the next batter was at the plate. With two outs, Mason Sierra drew a walk and Madyx Hough was hit by the pitch. Luke Barnett then juiced the bases with a walk. Eder next came up and got the bat on the ball but flew out to the infield to end the at-bat.

In the bottom of the third inning, Jax Cordova started the two-run rally with a single past shortstop. Mayz Gourley then singled to left field scoring Cordova. With two outs Chael Cordova tripled to the left fielder scoring Gourley. Will Barnett walked to join Cordova on the base paths, but Brantley Buller flew out to the third baseman to end the inning.

The top of the fourth inning was a shaky one defensively for the Eagles 10U as they allowed 4 Cowboy runs to come across as Chael Cordova, who up to that point was in complete command of the hill, ran into some tight calls. Eder would come in relief striking out one to end the inning for the Cowboys, but not before they had gained the lead, 5-4.

That would set up the Eagles’ final at-bat. Sierra reached on an error to start the at-bat. With Hough at the plate Sierra stole second and then third base. Hough would eventually strike out leaving one out on the field and the tying run on third. Luke Barnett then doubled with a hard hit over the left fielder’s head that scored Sierra and put Barnett, representing the winning run, on second base.

Eder then singled to right field giving Luke Barnett the room to round third and come home for the win.

Chael Cordova looked strong on the mound through 3.2 innings and would get the win by giving up just one hit, 4 earned runs, walked 6 and struck out 9 batters. Eder came in for the save working .1 inning giving up a hit and striking out one batter.

Sierra had 4 stolen bases, Will Barnett had 3 steals, Jax Cordova added 2 more, and Bohlander and Hough each had one theft.

In their second game of the day the Eagles 10U defeated Thomas County Storm 10U in a big score of 15-4. In the first inning the Eagles started their rally scoring with 4 runs and then blew the game wide open in the top of the second inning with 8 runs. They finished their offensive attack with 3 more runs in the top of the third and final inning.

Eder led off the top of the first with a walk. With one out Gourley walked joining Eder on the base paths. Alley then came up and smashed a home run to right field scoring 3 runs. Chael Cordova then followed Alley’s lead with another home run to dead center field.

The eight-run inning in the top of the second started with Sierra being hit by the pitch. Hough then got the ball in play and arrived on an error scoring Sierra. Luke Barnett pulled a walk moving Hough to second base. Eder hit into a fielder’s choice as Hough was out at third on the hit. Jax Cordova then came up and hit a solid single to right field scoring both Barnett and Eder.

Gourley started the run again as he was hit by the pitch joining Cordova on the base paths. Alley was still red hot at the plate doubling on a screaming ground ball past second base scoring both Cordova and Gourley. Bohlander then singled to center field scoring Alley.

With Bohlander aboard, Chael Cordova came to the plate for the second time in the game and blasted another home run to left field scoring two more runs.

In their final at-bat of the game Sierra started the three-run rally with a single to right field. With one out Luke Barnett pulled a walk joining Sierra on the base paths. Eder then singled scoring Sierra and Barnett. With Gourley at the plate Eder stole second, then stole third and came home on a throwing error.

The Eagles scattered 8 more hits around the field including 2 hits by Alley and Chael Cordova. Alley would have a double and a home run, while Cordova smashed two home runs in the game. One hit apiece came from Eder, Jax Cordova, Bohlander and Sierra. RBIs came from Eder with two, Jax Cordova with two, Alley with 4, Chael Cordova with 3, and one apiece from Bohlander and Hough.

Sierra and Eder each had 4 stolen bases, Gourley added 2 steals, and Luke Barnett and Jax Cordova each had a steal apiece.

Alley started on the bump and threw for one inning giving up one hit, one run, 4 walks and struck out one. Gourley came in relief for 2 innings and gave up 2 hits, 3 runs, walked 3 and struck out 6 batters.

The Eagles 10U continued to bring their aggressive brand of ball as they won their championship game, 12-3, over the Oakley Warriors 10U team.

The Eagles jumped out to an 8-1 lead after one complete inning of play. They would score 3 more in the second inning and added on a single insurance run in the top of the third.

Eder started the 8-run first inning with a walk. Jax Cordova walked. Gourley walked loading up the bases. Alley then put two across on a single to center field leaving Gourley on third base. Bohlander then doubled scoring both Gourley and Alley.

Chael Cordova’s bat was still hot as he pounded out a double to center field scoring Bohlander on the play. Will Barnett then joined Cordova on the base paths as he was hit by the pitch. Brantley Buller came to the plate and pounded out a ground ball single out to right center field that scored both Cordova and Barnett. Sierra then singled to right field scoring Buller for the last run of the inning.

Oakley managed to get a run in the bottom of the first, but the Eagles came back in the top of the second inning and pounded out three more runs.

With one out Gourley singled to third to start the rally. Alley then tripled to right field scoring Gourley.

With two outs and Alley out on the base paths Chael Cordova nailed a 0-2 pitch and sent a monster shot to right field for his third home run of the day.

In the top of the third inning Sierra and Luke Barnett got together to manufacture one more run. Sierra arrived on base when he was hit by the pitch. He would steal second and then move around to score when Barnett pounded a ball out second base.

Other hits came from Gourley, Buller and Sierra.

Alley had 3 RBIs. Chael Cordova, Buller and Bohlander each had 2 RBIs. Sierra added one more.

Sierra continued his crime spree as he again had 4 steals. Gourley, Eder and Bohlander each had 2 stolen bases, while Buller, Will Barnett, Chael Cordova and Jax Cordova each had one steal.

Buller threw a beauty on the hill putting in a complete game giving up 1 hit, no earned runs, 3 walks and had 5 strikeouts.

For their efforts each team member was awarded a gold medal and the team received a nice plaque with the name of the tournament and the date. The Eagles 10U Travel Team has one more tournament on slate as they’ll travel down to Liberal, KS on July 23 and 24. They are now 18-4 on their summer endeavors.