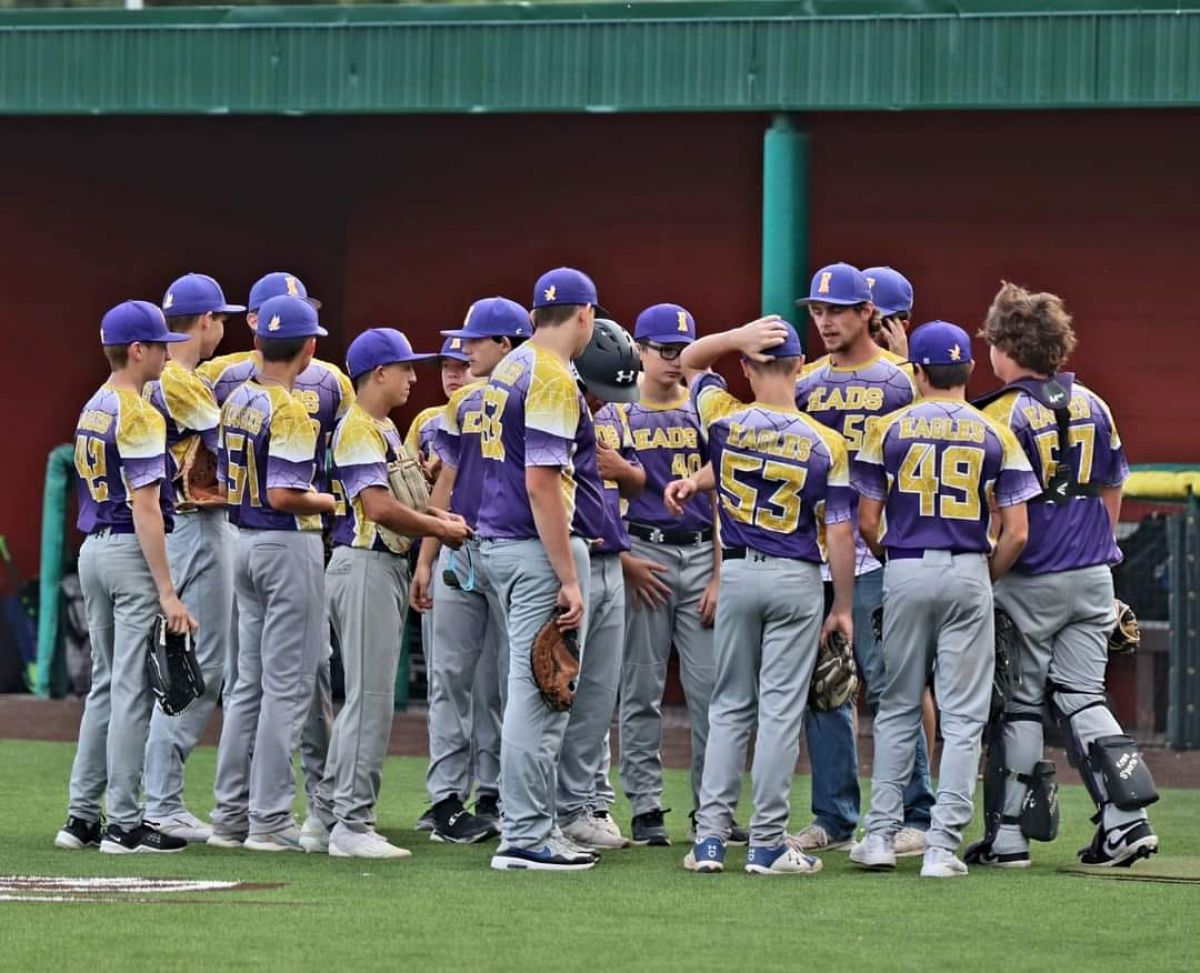 The Eads 16U baseball team between innings. The team is coached by Chance Fowler and A.J. Vasquez.

The Eads 16U team was the only Colorado group to compete in the six-team 16U-18U tournament held in Elkhart, KS over the weekend. They would go 2-1 in pool play on Saturday but lost in the opening round of the tournament on Sunday.

In pool play on Saturday the Eads 16U lost their first game 10-0 to Holcomb, but bounced back defeating Hugoton, 8-6. On Sunday, they continued their winning ways defeating the Elkhart All Stars, 11-10. In their final game, however, they lost in a major decision to the best team in the tournament, the Perryton Rangers Express 18U, 15-0.

This tournament was a good one for the local Colorado players to attend in order to continue to improve their level of play and competitiveness.

The Eads 16U consists of players from Eads and two from Kit Carson.

In their first game of the tournament against Holcomb, the bats for Eads were slow to get going as they could only muster 3 hits off the Holcomb pitcher. In addition, Eads had 3 errors which makes for a long day for the pitching staff.

The game was much closer than the score would indicate as both teams had trouble scoring until the bottom of the fifth with the score 3-0 when the dam broke for Eads as the Holcomb group polished off 6 runs grabbing the win.

Johnny Vasquez led the way for the Eagles with 2 hits while Case Nelson got the third hit for Eads. Besides Vasquez and Nelson only Mason Marriott and Wes Mitchek got on the base paths with a walk.

A.J. Hough was on the hill for 4 innings of work taking the loss for Eads. He would give up just 4 hits, 1 earned run, no walks and had 6 strike outs. Bryson States worked for one inning in relief giving up 4 hits, 4 earned runs, walked one and struck out none.

In the 8-6 win against Hugoton on Saturday afternoon, the Eagles built a six-run lead in the fifth inning and then held off Hugoton’s charge late in the game. The Hugoton offense would score four runs in the top of the sixth inning, but it wasn’t enough to overcome the Eads lead.

The three-run rally in the second inning started with one out when States pulled a walk and moved to second base on a Nelson single to right field. Spencer Uhland then loaded the bases with a walk, as well.

During Stockton Mitchek’s at-bat the speedy States scored on a passed ball. Mitchek would juice the bases for a second time with a walk. Jayson Bletzacker then hit into a fielder’s choice to third base scoring Nelson. Uhland would be forced out on the play while Mitchek advanced to second base.

The successful run in the third inning also started with one out when Hough pulled a walk and Marriott followed suit. Vasquez pounded out a hard hit to shortstop loading the bases. States then came up and blasted a line drive to center field scoring Hough. A throwing error at third also scored Marriott. Vasquez ended up on third and States on second base. The next two batters grounded out leaving two birdies on the pond.

Hugoton had 7 hits while Eads only had 6 hits overall, but they ran the bases well and took advantage of 3 Hugoton errors. Unfortunately, the errors still plagued Eads, as well, particularly in the sixth inning, registering 5 errors.

Vasquez again was hot with the bat getting two hits including a double. States also had two hits and contributed 3 RBIs to his teammates. Additional hits came from Nelson and Bletzacker. Vasquez and Stockton Mitchek scored 2 runs apiece while Hough, Marriott, States and Nelson all crossed the plate once.

Stockton Mitchek had the only stolen base.

Nelson threw a beauty of a game going 5 innings. He would give up 4 hits, 1 earned run, 1 walk and struck out a very impressive 12 batters. Karsten Buller came in for one inning of relief giving up 3 hits, no earned runs, 2 walks and struck out one batter.

On Sunday it was Vasquez’s dramatic walk-off that gave the Eads 16U a 11-10 victory over the Elkhart All Stars. The game was tied at ten with Eads batting in the bottom of the extra eighth inning when Vasquez singled past the shortstop driving in States for the winning run.

The Eagles scored in nearly every inning throughout the extra-innings game. They would tie the contest at 5 in the bottom of the third inning when they put together a 4-inning rally. Then again in the bottom of the fifth inning they scored three more extending their lead to 9-5. They then gained another run in the bottom of the sixth to make it 10-5 going into Elkhart’s presumedly last at-bat. However, 5 runs later the game was tied up after the top of the 7th inning, 10-10. Eads failed to score in the bottom of that inning and that forced extra innings. The Eagles held off the Elkhart offense in their at-bat and it came down to Vasquez’ RBI single for States.

The Eagles scattered 9 hits around the field compared to 5 for Elkhart. Both teams struggled defensively as Eads committed 9 errors, but Elkhart had 12.

Hough was hot at the plate getting 3 hits in the game. Two hits came from Vasquez and Buller. Marriott and Nelson each added a single. Shaine Winder, States, Hough and Nelson each scored 2 runs. Nelson and Buller each had two RBIs.

Nelson was again on the bump and got the win for Eads putting in a second tremendous performance for the win. He would go six innings giving up 3 hits and just one earned run. He walked just two batters and struck out 12. Hough gave two strong innings of relief for Eads giving up 2 hits, 2 earned runs, walked 2 and mowed down 6 batters.

The final game for Eads in the tournament on Sunday came in the form of a mature 18U team from Perryton, Texas. Eads was just out-manned by the older players. They would hold their own the first inning giving up just three runs, but a huge second inning for the Rangers Express 18U resulted in 11 runs. The game was over after three complete innings when the Perryton group scored one run in the bottom of the third resulting in a major 15-0 decision.

Eads only managed 2 hits in the contest while Perryton had only 5. But the Texas group hit the ball hard getting it in play and forcing Eads to commit 9 errors.

Winder was the only Eads player who managed to hit the Rangers Express pitcher as he got two singles. Just Nelson and Hough worked themselves onto the basepaths with walks. There was only one strike out for Eads, but they grounded out numerous times to the Texas defense.

Eads tried three different pitchers on the mound. Hough, who had just finished the game before, took the loss going 1.1 innings giving up 3 hits, 6 earned runs, walked 4 and struck out zero. Gage Arnold came in relief for Hough and gave up a hit and walked 3 batters while 5 came across the plate. Arnold handed the ball over to Buller who pitched for .2 innings giving up a hit and no earned runs, no walks and no strikeouts.

The weekend was positive for the future of the Eads High School baseball program as these young players saw a number of good pitchers and were forced to get out of their comfort zone in order to play against more mature players. Hopefully, Marriott and States will continue to play with the Eads boys as they are important in the future success for baseball in this small area of southeastern Colorado.