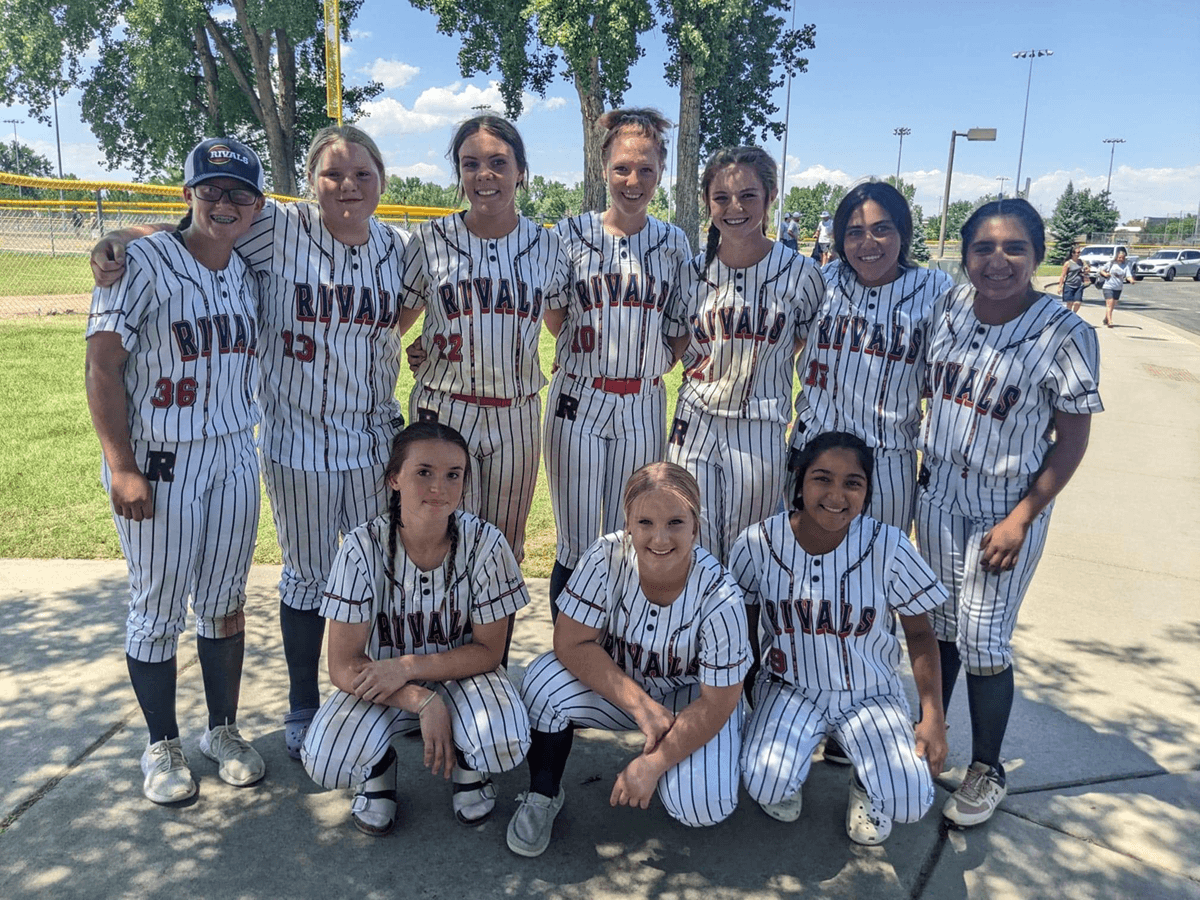 Rivals 14U Softball Team Perfect to Tournament Semifinals in Loveland

It was the best tournament the Rivals 14U team had this summer. When you get up to the 14U level things are different. This game is fast and some of the best players in the state, already being looked at by college coaches, are competing in these tournaments.

The local team with players from Eads, Wiley, McClave and Lamar, known as the Rivals 14U, came together at the USSSA Rocky Mountain Championships in Loveland and put together a heck of a tournament winning all three pool games on Saturday and then advancing to the semifinals on Sunday before being defeated and eliminated from the tournament.

In pool play on Saturday the Rivals were perfect defeating the Colorado CRUSH, 12-11. They then defeated the FC Stars Loya 14U in a second close game, 6-5. Finally, in the last pool game of the tournament the Rivals 14U overpowered the PW Thunder 14U Red, 13-5.

That Saturday performance seeded the Rivals well in Sunday’s tournament taking on a weak Northeastern Gold in the first tournament round and defeating them 19-5. They then ran a major decision over the Colorado Diamonds 14U Roybal, 13-3. Finally, the Rivals 14U, in their third game of the day, struggled to overcome fatigue in the last two innings losing a heartbreaker to the Inferno Rodriguez 14U, 17-13.

The Rivals lost their chance to advance to the tournament championship placing third overall.

The Rivals were in complete control against the Colorado CRUSH in their first pool game on Saturday leading 9-4 after three innings. But a devastating fourth inning defensively allowed the CRUSH back into the contest after they scored 7 runs to take an 11-9 lead. The Rivals had to rally in their final at-bat to get the win scoring three runs in the bottom of the fourth inning.

With the game tied at 11-11 Savanna Brown drew a walk with the bases loaded scoring the winning run. In that final inning, trailing 11-9, catcher Dixie Bitner came to the plate first and was hit a pitch taking her base. Braylynn Penaflor would sing to center field as Bitner aggressively scored stealing home. Bailey Sierra hit into a fielder’s choice where the CRUSH got Penaflor advancing to second for one out. Kara Wilson then singled to center field scoring Sierra to tie the game.

During Zoe Martinez’ at-bat Wilson worked her way to third base representing the winning run. Martinez eventually walked as Wilson remained at third base. Next up was Maddie Wertz who loaded the bases when she was hit by the pitch. That’s when Brown took four straight balls walking to first and bringing Wilson home to win the game.

The Rivals’ bats were hot as they scattered 12 hits around the field. Two hits apiece came from Penaflor, Wilson, Tailee Weeks-Johnson and Jocelyn Salgado. Lexi Shotton, Bitner, Sierra and Martinez each had one hit apiece. Bitner had a double. Shotton hit a triple bringing in two runners and Weeks-Johnson also pounded out a triple bringing in 2 runs.

Bitner had two stolen bases while Shotton had one.

The Rivals then duplicated their exciting come-from-behind win with a second one in the next pool game. They would defeat the FC Stars Loya 14U group 6-5 with a second walk-off victory. The game was tied at five with the Rivals batting in the bottom of the fourth inning when the Rivals scored one run on a stolen base by Martinez.

In that inning the Rivals trailed 5-4 going into their last at-bat. Wilson walked to start their final at-bat. Martinez then came up and pounded out a triple on the first delivery from the pitcher. That triple scored Wilson and tied the contest, 5-5.

With Martinez at third Maddie Wertz pulled a walk putting runners on the corners. Next up was Brown who again had a part in bringing in the winning run as she hit a fly ball in foul territory that the first baseman had to run back to collect. The out was made, but in a heads-up play Martinez tagged up and third and then stole home for the exciting win.

The Rivals were out hit by the FC Stars Loya, 9 to 6. The Rivals also committed one error and still managed to win in a timely manner.

Shotton had two hits for the Rivals in the one-hole including a double and a homerun in the bottom of the first inning. Sierra also hit a double, while singles came from Bitner, Wilson and Martinez who nailed that timely triple.

Stolen bases were collected by Bitner (2), Sierra and Martinez.

Penaflor got the win in the circle throwing a complete game of four innings. She would give up 9 hits, 5 earned runs, 2 walks and struck out 2 batters.

In their final pool game on Saturday the Rivals’ bats were on fire as the pounded out 15 hits on their way to a 13-5 win over the PW Thunder 14U Red.

After a scoreless first inning, the Rivals exploded for 4 runs in the top of the second. But the Reds answered with 5 runs in the bottom of the same inning taking a 5-4 lead into the final inning.

It would be a 9-run inning in the top of the third that finished off the Red team as Penaflor closed the door on them in the final at-bat.

The 9-run rally in the top of the third inning began with a Wilson triple into the gap past shortstop. Martinez then arrived on an error by the pitcher. Wertz then doubled to left field scoring Wilson and Martinez. With one out Wertz was on third when she was hit in by Weeks-Johnson who sent a single to center field. Salgado then laid down a beauty of a bunt advancing Weeks-Johnson to third and arriving on first at the same time.

With two aboard, Shotton pounded out a fly-ball double to right field scoring both Weeks-Johnson and Salgado. Bitner then came up and got Shotton across on a double to center field. Penaflor then singled to center field scoring Bitner. Next up was Sierra who blasted a fly ball to right field for a triple sending Penaflor across. Wilson then grounded out to second but brought Sierra home from third for the final run of the big rally.

The bats were huge in their final Saturday game as Wertz, Bitner, Salgado and Shotton all hit doubles. Triples came from Wilson and Sierra. The 15 hits came from multiple hits from Wilson, Martinez, Wertz, Weeks-Johnson and Salgado. Shotton, Bitner, Penaflor, Sierra and Brown all had one hit.

Weeks-Johnson had 3 stolen bases, while Brown added two thefts, and Bitner and Martinez each had one steal.

The three pool wins on Saturday seeded the Rivals in a very positive position moving into Sunday’s do-or-die tournament. In the first round on Sunday the Rivals destroyed the Northeastern Gold, 19-5, pounding out 18 hits in the game. The Rivals would start the game with six runs and then in the second inning they added 13 more. Leading 19-0 the Rivals gave up 5 runs in the bottom of the third but would win the game with a major decision.

Penaflor kept the Northeastern Gold team off balance giving up 6 hits, 5 earned runs, 2 walks and struck out two to get the win.

But it was the bats for the Rivals that did the talking. Shotton, Sierra, Martinez and Weeks-Johnson all went 3-for-3 in the game. Penaflor and Brown each had two hits apiece. One hit each went to Wilson and Wertz. Penaflor, Sierra and Weeks-Johnson had 3 RBIs apiece, while Shotton and Martinez each added two RBIs.

Extra-base hits were many as Sierra, Martinez and Weeks-Johnson each hit doubles. Triples went to Sierra and Shotton. Bitner, Penaflor and Brown each had 2 steals apiece, while Martinez added one theft.

That first round win advanced the Rivals to the tournament quarterfinals game where they grabbed a major decision in three innings over the Colorado Diamonds, 13-3.

With the Rivals leading 3-1 after the first inning, they exploded for 10 runs in the bottom of the second inning grabbing a 13-1 lead. The Diamonds did get two runs in the top of the third, but they needed one more to avoid the major decision.

In the quarterfinal win the Rivals used 10 hits, many for extra bases, to control the contest. Shotton had a tremendous game at the plate going 3-for-3 scoring 2 runs and one RBI. Wilson also added multiple hits with 2, scoring 2 runs and bringing home 2 teammates. Salgado added 2 RBIs, while Brown, Wilson and Penaflor also scored two runs each.

The Rivals pounded out 4 doubles in the game with Martinez, Bitner, Shotton and Wilson getting one each. Shotton had one stolen base.

Penaflor continued to be strong in the circle getting another win in 2.2 innings of work. She would give up 3 hits, one earned run, walked 3 and struck out two.

The semifinals game against the Inferno Rodriguez was a heartbreaker for the Rivals as they lost the lead late in the game. The contest was tied at 11 with the Inferno Rodriguez batting in the top of the fifth inning when Macee Petersen doubled on a 1-2 count, scoring one run to take the lead.

The Rivals scored 5 runs in the bottom of the fourth inning to tie the game at 11 apiece after trailing 11-6 going into that at-bat.

With Penaflor and Sierra aboard, Wilson singled to center field scoring Penaflor and moving Sierra to second base. Martinez then blasted a triple past the center fielder scoring both Sierra and Wilson.

But the Rivals’ pitching could not contain the offensive attack in the top of the fifth inning as both pitchers ran out of gas. The Inferno scored six runs in that last at bat and it was just too much of a deficit for the Rivals to gain back, although they scored two more runs in their last at-bat.

Sierra’s speed in the circle kept the Inferno off-balance until late in the fourth inning. Sierra would go four innings giving up 9 hits and 7 earned runs, walking 7 and striking out six batters. Penaflor came in relief for the final at-bat but was fatigued giving up 4 hits and 5 runs, walking one and striking out zero. Penaflor would take the loss.

Martinez had two doubles and a triple. Bitner and Wilson also added one double apiece.

Despite the loss the Rivals had 16 hits and 11 RBIs in the game. Three hits came from Martinez and Sierra. Bitner, Wilson, Brown and Weeks-Johnson each added two hits.

Bitner had two stolen bases, while Brown and Weeks-Johnson each stole a base apiece.

This was the Rivals’ 14U final tournament and now summer ball 2022 is in the books. Most of the players, except for Sierra and Brown, are entering high school. Penaflor will more than likely play for the Lamar Thunder softball team while the rest of the Rivals, if they play softball during the high school season, will play for the Wiley Panthers. The Panthers are entering their third year of fielding a high school softball team.