Lamar Holiday Basketball A Tough One For Eads Girls

The Eads girls’ basketball team entered the annual Lamar Holiday Basketball Tournament seeded #6 and slated to take on #3 McClave.  Eads was 2-1 going in as they had lost to a fast and athletic Springfield team the week before.  Unfortunately for the Lady Eagles, they were without the services of point guard and defensive scrapper Miranda Mitchek who had suffered a sprang to her ankle earlier that week in practice.  Sophomore Lauren Spady would start in Mitchek’s place and did an admirable job running the ball for the Lady Eagles.  Unfortunately, the Eads girls did not show up to play competitively on Thursday against the Lady Cards as they struggled to score losing in a very low-scoring game, 31-17.  The loss moved them to the consolation side of the bracket where they would defeat Granada on Friday in the semifinals, 45-30.  The Lady Eagles would put in a good game against the much-improved Wiley girls on Saturday in the consolation championship but would drop the game 49-46 in a close contest.  Eads is now 3-3 on the early season. 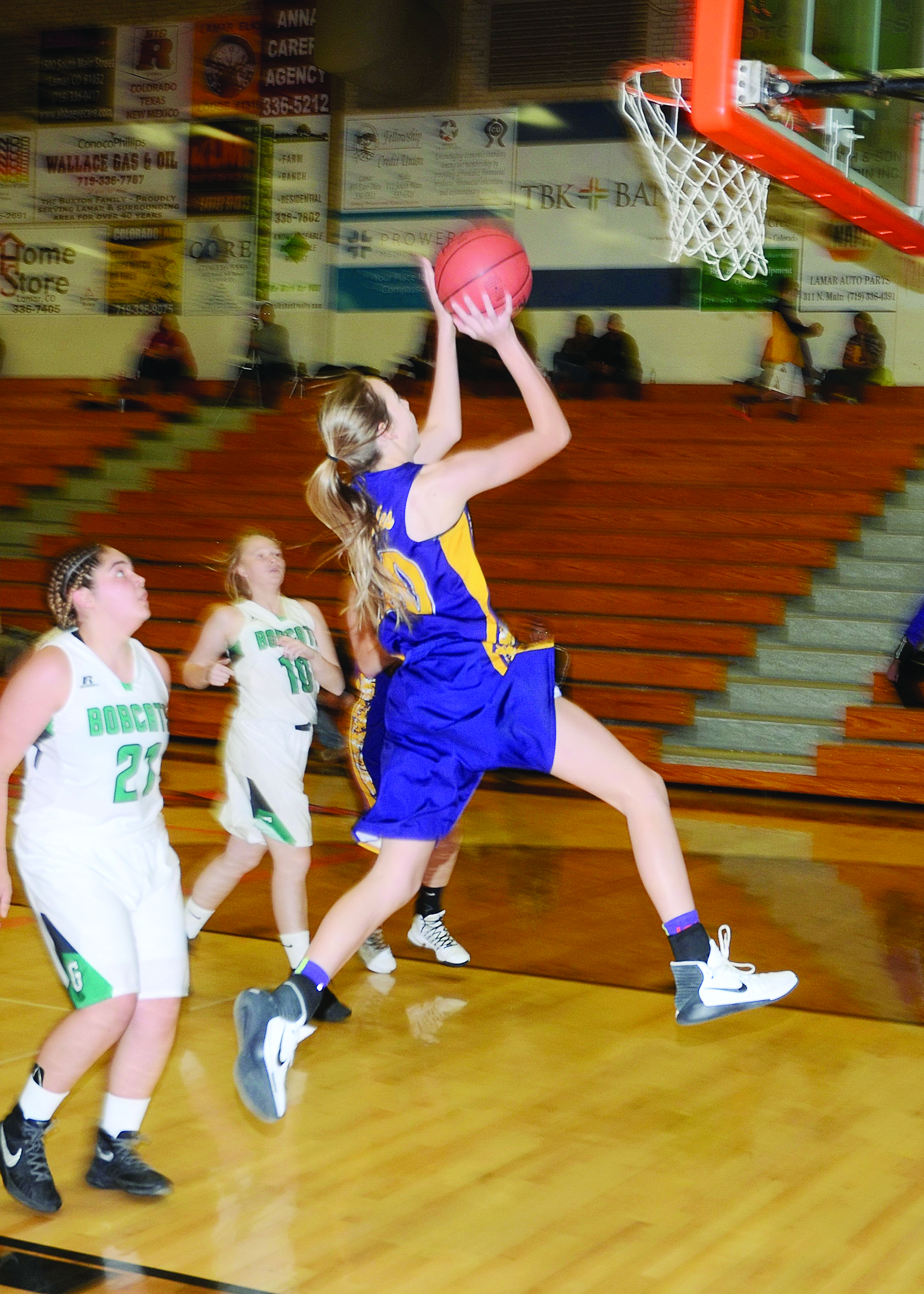 The quarterfinals on Thursday was a disappointment for Eagle fans as the Eads girls appeared to be at odds with either their team mates or the coaching staff, playing with little enthusiasm and effort.  They started out slow against McClave’s 1-3-1 defense and could not find a way to score early.  Going into the second period the triangle of Mariah Smith, Brenna Rouse, and Kaylee Wilson looked effective as Eads scored three straight buckets off the set forcing McClave to take a time out to talk about how to defend it.  But when the Lady Eagles went back on the floor Coach Eder could not get them to go back to the set and Eads never scored again in the period.  By the fourth quarter Eads had thown in the towel not scoring a single point.  Rouse managed a three ball on her way to six points to lead Eads, while Smith had 4 boards.

Mariah Smith gave Granada a lot of trouble in the consolation semifinals on Friday as the 6’ 0 junior with a long wing span was too much of a presence inside the paint for the Bobcats.  Smith pulled a double-double with 20 points and 14 rebounds.  Rouse finally found a little bit of success scoring 9 points and had a great game defensively.  Spady was impressive at 5’ 2 pulling down 9 key boards from the back side.  The group, overall, worked better together and would use a strong third quarter to finish off the Bobcats.

In the consolation championship the Eads girls put in a good game against the Wiley Lady Panthers and would lead by a bucket, 16-14, after the first stanza.  However, it looked like either both teams adjusted or they ran out of gas going into the fourth period as the scoring was low and play was sloppy.  Wiley had a one-point lead going to the intermission, 21-20.  During the second half the lead teetered back and forth as neither team could gain the upper-hand.  Late in the game Eads was holding on to a tenuous one-point lead when Wilson would pull her fifth foul from three-point land and put Marisa Vasquez on the line shooting three freebies.  She sunk all three giving Wiley the edge, 46-44.  Going down the stretch Wiley had control and Eads was forced to foul.  The Panthers made their free throws when it counted.

Smith would hit for 14 counters and pull down 7 boards while Rouse hit four three-balls on her way to 12 points.  Wilson added 10 points.  She and Smith combined at the free throw to give Eads a perfect performance going 8-for-8.

The girls have a lot of work to put in over the break, but at 3-3 they are still looking decent and if they make improvements using hard work to get there they could make some noise later on in the season.  Hopefully, they get in the gym over the break and work on the individual skills.
Photo Credit Colorado Preps and Marty Miller