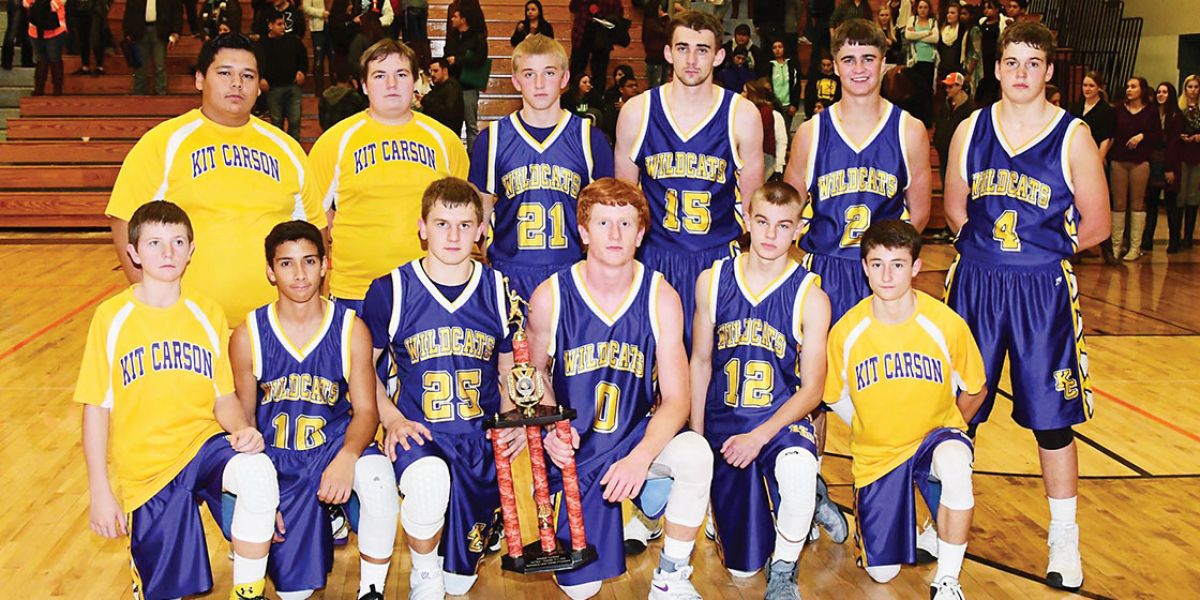 The Kit Carson Wildcats came into the Lamar Chamber of Commerce Holiday Tournament seeded 3rd. They battled all the way to the championship game on Saturday Night, losing to a quick, athletic Holly Wildcat team. The Wildcats began the tournament strong on Thursday night taking a decisive win over the Walsh Eagles, 55-28. In the semi-final game on Friday night they garnered a solid win over the McClave Cardinals, 51-31. In a repeat of last years final in the Holiday Tournament the KC Wildcats again faced the Holly Wildcats in the championship game. Kit Carson couldn’t find their scoring rhythm until late in the game and they lost, 47-39.

In the opening round against the Walsh Eagles the Wildcats jumped out to a 16-4 lead in the 1st quarter. The Cats continued to display very impressive offensive for the remainder of the game, scoring another 14 points in the 2nd quarter, 30-14 at the half. In the 3rd quarter the Cats really found their shots scoring 19 points and holding the Eagles to just 4. Many of the Cats found playing time in the final quarter, helping to seal the win 55-28. KC shot 29% (6 of 21) from the 3-point line; Walsh was unsuccessful from 3-point range (0 for 11). From 2-point range KC scored 61% (17 for 28) compared to 37% for Walsh (11 for 30). KC shot 3 for 4 or 75% from the free throw line, while Walsh was 6 for 10 or 60%. KC led in rebounds with 28 compared to Walsh’s 25. KC had 19 turnovers compared to Walsh’s 27. Jaxon Crawford led in scoring with 16, Trevor Medford and Hunter Clapper and Cordell Farmer each had 2, Brad Johnson had 13, Blake Dickey 10, Jayden McCombs-Farmer 4, and William Hornung 6. Johnson and Hornung each grabbed 7 rebounds, Crawford and Medford each had 3, Clapper 4, Dickey 2, and Jayden McCombs Farmer and TJ Conaway each had 1. Crawford took a charge and had a block, Hornung and Medford led with 3 steals each, and Johnson and Crawford led with 4 assists apiece. 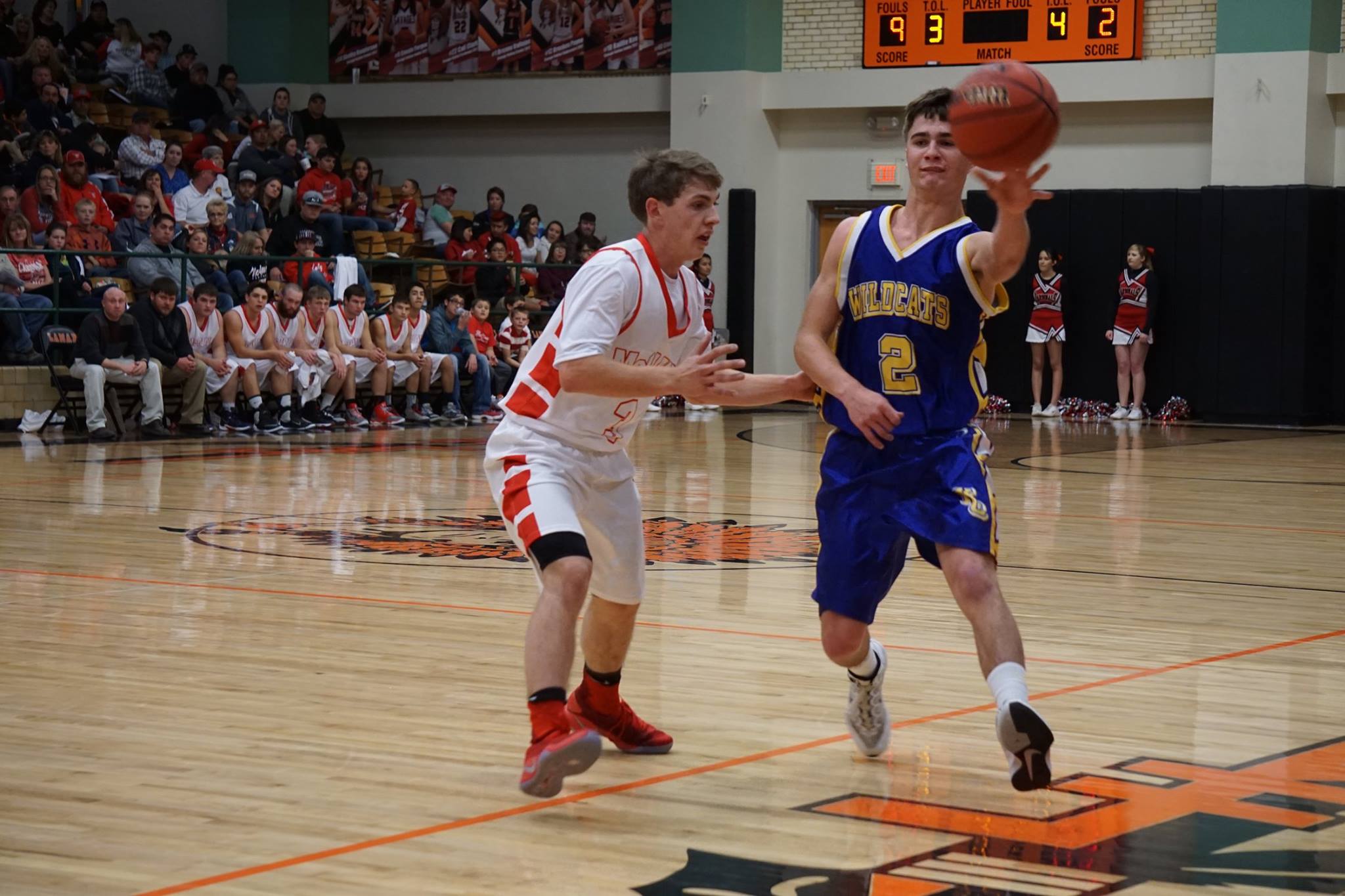 In the semi-final round, Kit Carson faced the McClave Cardinals. In the 1st quarter the Wildcats jumped out ahead 12 to 4, and they would hold the lead for the entire game. Outscoring the Cardinals 10 to 7 in the 2nd quarter, the halftime score was 22-11. In the 3rd quarter the Cats narrowly edged the Cardinals 11-9. McClave battled in the final stanza, but the gap was too wide for them to close and the final score was KC 51, McClave 31. The Cats shot 29% from behind the arc (6 of 21), while the Cardinals shot 31%  (5 of 16). One could argue that the game was decided from the 2-point line as KC scored 50% (10 of 20) while McClave only made 15% (3 of 20). KC made more trips to the charity stripe and was 13 of 23 (57%) while McClave shot 10 of 15 (67%). KC only turned the ball over 12 times compared to McClave’s 23. Johnson was the leading scorer with 16, Crawford had 15, Hornung 7, McCombs-Farmer and Clapper and Dickey each had 2, TJ Conaway had 1 and Medford had 6. KC crashed the boards a bit more than McClave, 34 to 32. Crawford had 11 boards, Hornung and Dickey had 5 apiece, Johnson had 4, Conaway and Clapper each had 3, Medford had 2 and Manuel Soliz had 1. Crawford took 3 charges and Dickey had a block.  Dickey led in steals with 3 and Johnson led in assists with 5. 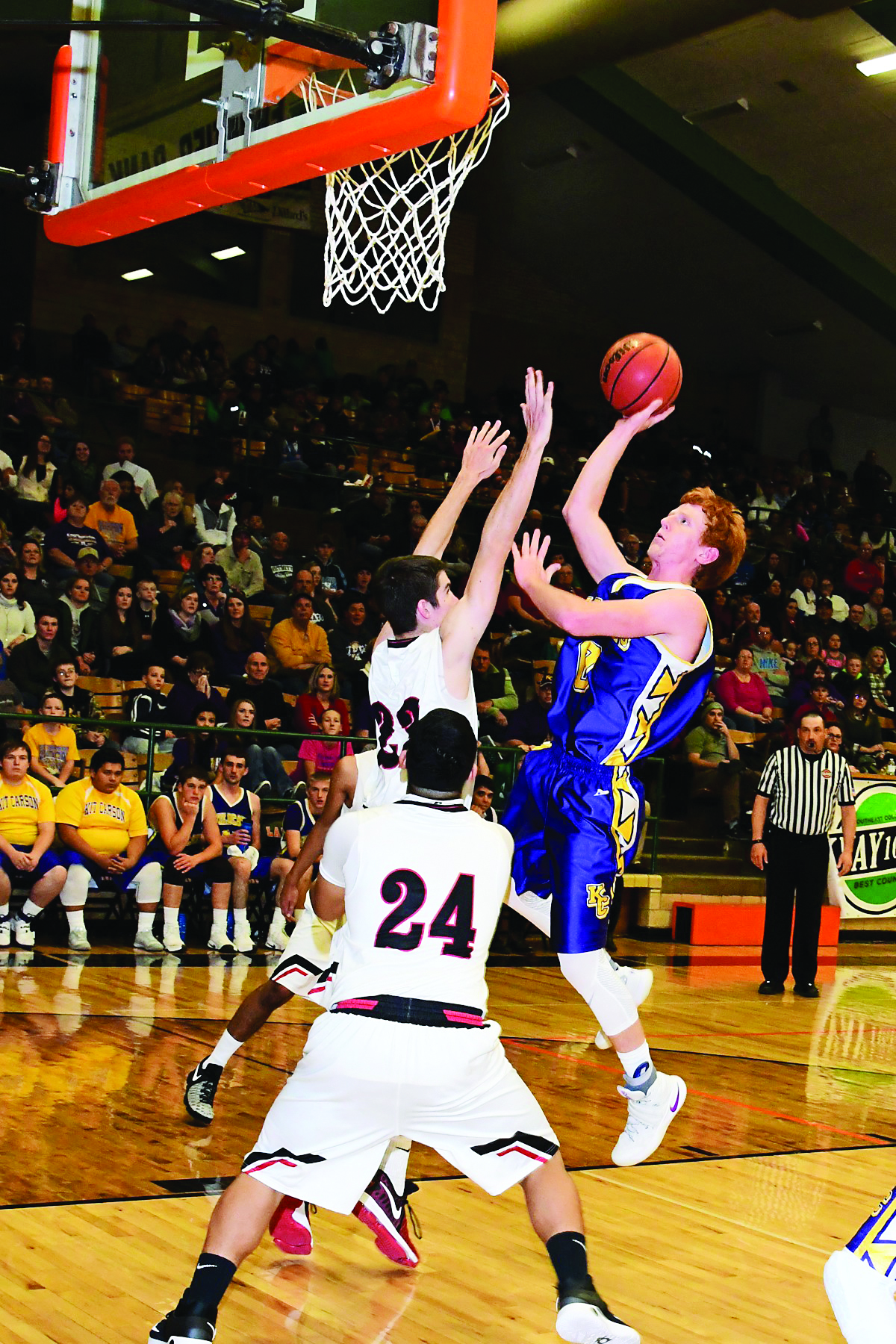 Coach Trahern commented on the Wildcat’s Holiday Tournament performance.  “We made some progress over our first two games.  I thought we played consistent defense in our first two games against Walsh and McClave but had a few possessions in the Holly game that really hurt us.  Our rebounding will be a key point of emphasis when we return after break.  We aren’t getting to the offensive board consistently and our defensive rebounding hasn’t lived up to our expectations.  Offensively we really haven’t shot the ball well in any of our five games up to now.  I think after the break we will just get better and better on the offensive end, as we get some quality practice time.  In the holiday tournament we shot 39 free throws and only converted 22 of those for 56%.  We are a much better free throw shooting team than the numbers indicate and we will get better after break.  Our second place finish wasn’t the goal we had in mind, but it certainly gives us an idea where we are with our skills and our team execution. Holly is a very good team with outstanding quickness and we can certainly pick a lot of areas where we can improve. As poorly as we played offensively we made a run at the end but just couldn’t get anything going offensively for most of the night.  Our January schedule is quite challenging.  It will be interesting to see how we respond after the break.”