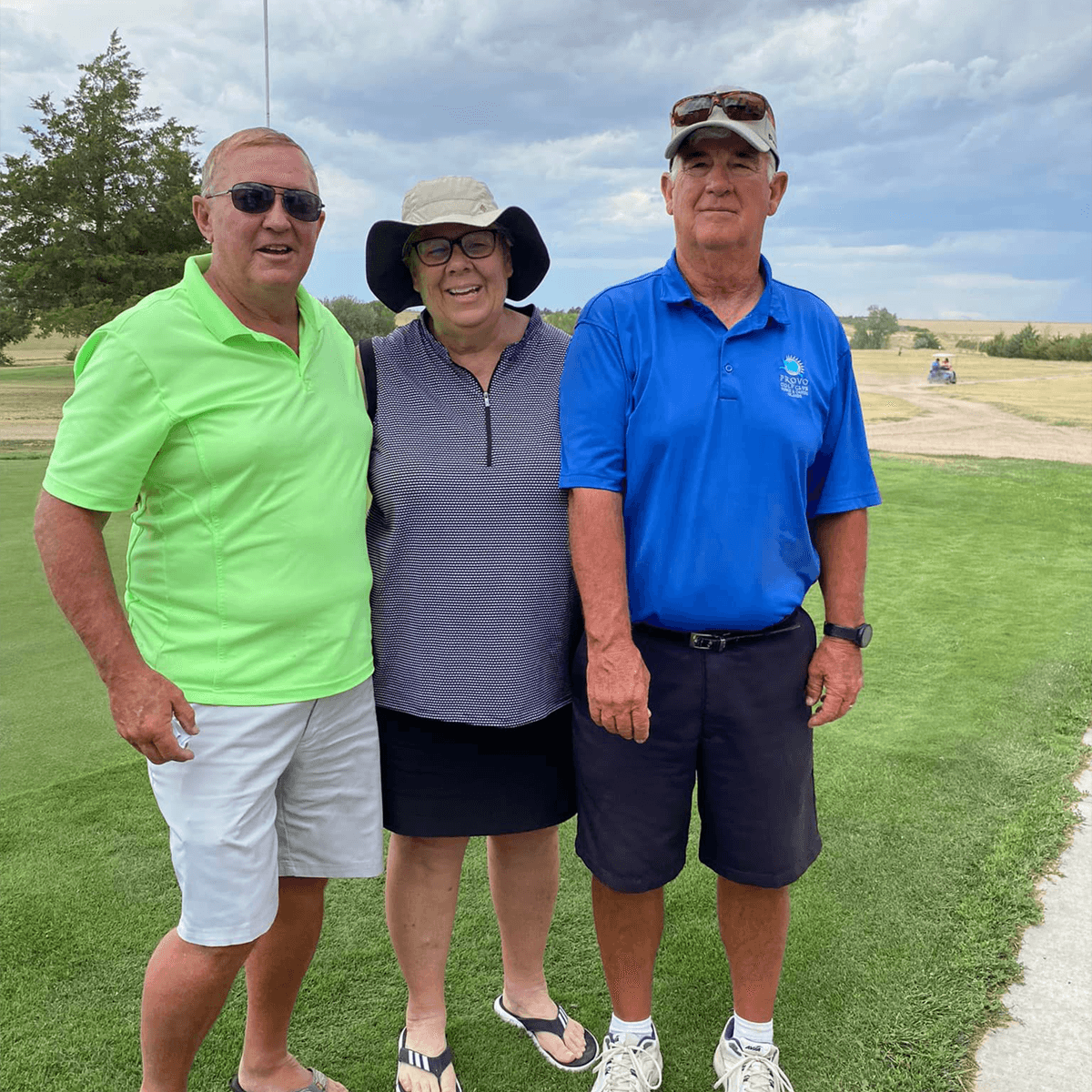 Although there was a lot of things going on last Saturday that kept many die-hard golfers away, the annual 2-Man-1-Woman Golf Tournament enjoyed a record number of trios, 27 in all, competing at the Eads Golf Course. Three flights of golfers squared off in this tournament with the team of Kim Richards, Tom Richards and Larry Gifford leading the charge to win the Championship Flight. Their -10 under 62 was the best score in the tournament by just one stroke.

The rules for the 2-Man-1-Woman golf game are a little different, obviously, than just in a regular tournament. The rules required that each player’s drive had to be taken at least twice in a nine-hole round of golf, after which the team could play the best ball during the hole. Each team played two rounds, or 18 holes during the tournament.

The Richards/Richards/Gifford team was -4 under after the front nine coming in tied with Natalie/Robert/Jim who also had a 32. But the Eads team came through on the back nine improving by 2 stokes and shooting an impressive -6 under 30 to secure the one stroke victory. Natalie/Robert/Jim came in second place with a -9 under 63. In third place was the Cheyenne Wells team of Quade Pelton, Craig Smith and Kendra Noe with a -7 under 65 on the day.

The First Flight had 10 teams in the ranks, all who shot a -1 under 35 in the front nine. The flight was won by a Kit Carson couple plus an Eads golfer as Sara Crawford, Mike Crawford and Chad Rouse shot an amazing -8 under 28 on the back nine to save their one under 35 in the first round. That is by far the best round seen on the Eads course this summer. They won the first-place money with a total score of -9 under 63 for the tournament.

In second place in the First Flight was Erin/Doug/Justin who also shot a sub-30 round with a 29 on the back nine. Their -8 under 64 was an impressive score in the First Flight. In third place was Angie/Colin/Red coming in one stroke behind the second-place team with a -7 under 65. Their back-nine score of 30 was yet another very impressive round seldom seen.

The Second Flight was also packed with teams as 11 trios came in on the front nine with scores ranging from an even par 36 to a +7 over 43.

Winning the Second Flight was the Eads team of LaDonna Crawford, Gail Crawford and Shawn Randel. That team shot an even par 36 and then came in hot on the back nine with a -2 under 34 for a total score of 70.

In second place was the team of Charla Ferris, Dave Wall and Chad Sniff shooting a -1 under 71 on the day.

The final place in the tournament, third place in the Second Flight, went to Gina Dechant, Jason Dechant and Tom Rhoades from Kit Carson. They would stay steady shooting even par in the first nine but went sub-par golf in the back nine with a -1 under 35 and tying with the team that placed second. Dechant/Dechant/Rhoades would lose the tie breaker.

The next tournament at the Eads Golf Tournament will be the 2nd Annual Jimmy Patterson Memorial Tournament, a 2-Man Scramble Golf Tournament for two days filled with lots of hole prizes and great fun on August 6 & 7.