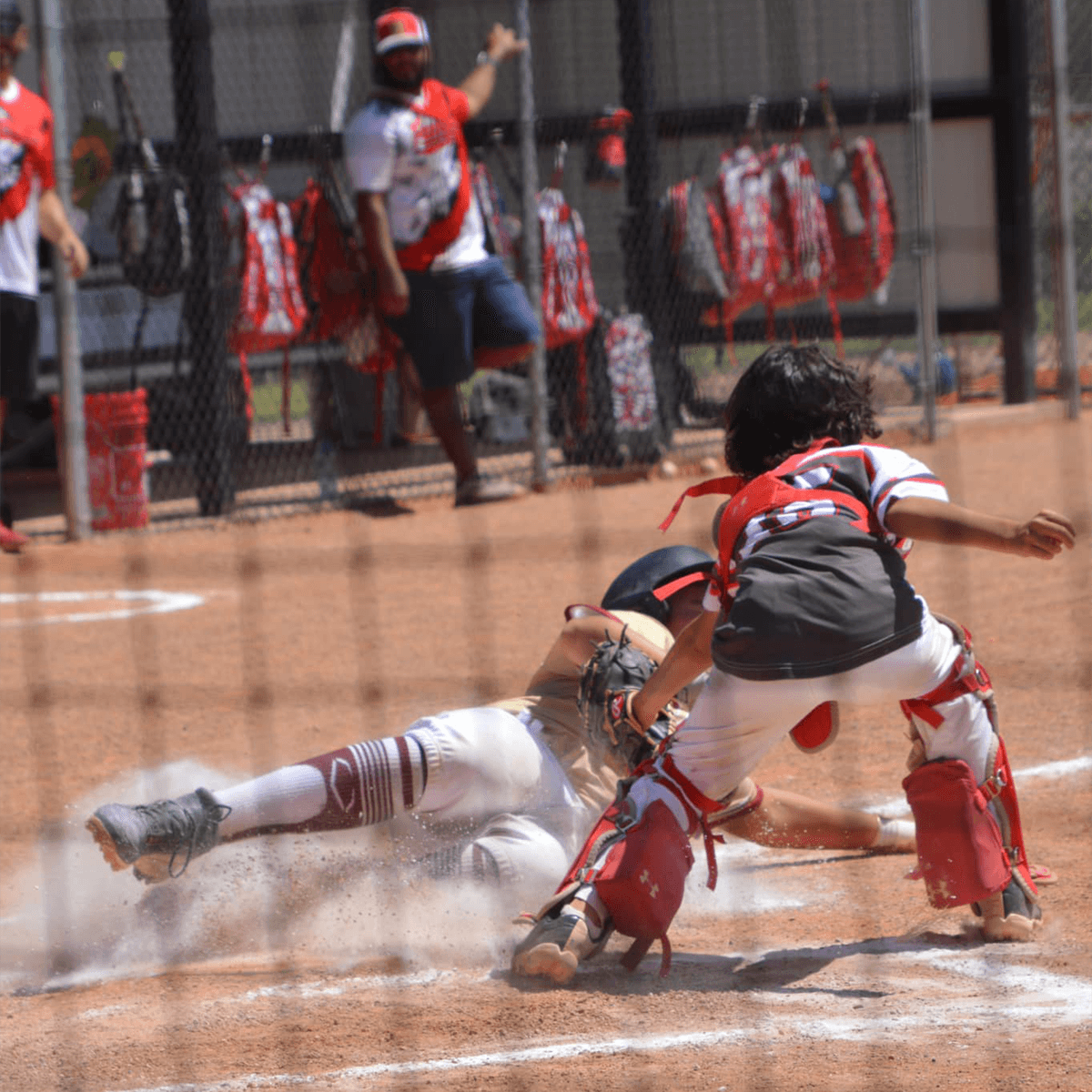 Chael Cordova slides in safe at home during 10U baseball action in Liberal, KS.

It wasn’t their best performance, but the 10U team from Eads never quit and gave it all they had despite the Baseball Gods having other ideas as to how things would go. After a very successful first tournament day on Saturday the 10U group from Eads won two games and tied in their third to enter Sunday’s tournament semifinal seeded second overall.

However, an error-laden performance was on the agenda for Sunday and the Eads group lost in the semifinals to a team they beat the day before. This would be their final game of an impressive summer of baseball where their overall record was 27-5-2.

The last tournament of the season for the boys from Eads, with two from Walsh added in, was held in Liberal, KS where teams from Kansas, Oklahoma, Colorado and Texas battled it out in 106-degree temperatures.

After the first day of tournament play the Eagles managed to lose a late-game lead and had to settle for a tie, 7-7 with the Panhandle Sox 10U. The next game saw Eads jump way out in front of the Perryton (TX) Rangers winning the contest, 11-7. They would then win their final game of the long and very hot day by defeating the Liberal Rattlers 10U in a strong 14-0 victory.

As successful as Saturday was, Sunday proved to be frustrating for the Eads group as they started slow and never really got on track in the semifinal game against the Perryton Rangers, a team they had controlled easily the day before. Although they were threatening late in the game, the Texas group did not break and advanced to the championship game with a 10-3 win over the Eagles.

That loss ended the summer ball season for the youngsters from southeastern Colorado.

On Saturday in their first game against the Panhandle Sox from Oklahoma Mayz Gourley was on the hill for Eads and went 3 innings of solid work giving up 2 earned runs, 4 hits, 1 walk and striking out an impressive 7 batters in the 7-7 tie ballgame.

The Eads boys scattered 6 hits around the field against the Panhandle group with Dallas Alley leading the way going 2-for-2 at the plate. Liam Eder, Jax Cordova, Gourley and Chael Cordova each added one hit. Alley and Cordova had 2 RBIs apiece while Eder added one more.

Eder scored two runs, as did Gourley. Jax Cordova, Alley and Luke Barnett each crossed the plate once.

Chael Cordova had 3 stolen bases. Mason Sierra, Gourley, Eder, and Alley each added 2 thefts apiece, while Luke Barnett, Madyx Hough and Will Barnett each had one stolen base.

The Eads boys jumped out to a huge lead against the Perryton Rangers from Texas in their second game on Saturday. After three at-bats, Eads led 11-0 going into the bottom of the third inning. However, the Rangers settled in and managed to score 7 runs in their final at-bat. Eads would finally win, 11-7, but not before they got a bit of a scare.

In the top of the first inning Eder walked to start the game and went around and scored during the next two at-bats. Alley then pulled a walk with two outs and Bohlander joined him with another walk. Chael Cordova then pounded out a single past third base scoring Alley. Will Barnett followed with another single to center field scoring both Bohlander and Cordova while causing havoc on the bases stealing third on the throw to home. Barnett would steal home on a delayed steal during Buller’s at-bat. Eads then got Buller and Sierra on board but could not get them around.

The Eagles had to use three pitchers in the game with Alley getting the win on the hill. The righthander went two solid innings of work giving up just 1 hit, no runs, walking 3 batters, but striking out 6. Eder and Buller both had to work through that final inning as Eder eventually got two outs on the field after giving up 2 hits, 5 walks and striking out 1. Buller came in for the final strikeout to end the game.

Will Barnett was hot with the bat against the Texas crew as he went 2-for-2 with 4 RBIs and scored two runs. Chael Cordova also went 2-for-2 scoring 2 runs. Other hits came from Jax Cordova, Jaxon Bohlander and Sierra with one hit apiece.

Buller had 4 stolen bases and Luke Barnett had 3 steals. Alley, Jax Cordova and Eder each had 2 thefts, while Sierra, Chael Cordova, Bohlander and Will Barnett each a steal apiece.

Eads made three errors in the game.

Eads pounded out 11 hits in the game while the pitching staff only gave up a single hit.

Eder, Jax Cordova, Alley, and Will Barnett were all 2-for-2 on the day. Bohlander, Chael Cordova and Luke Barnett each got one hit.

Will Barnett led the way with 4 RBIs and 2 runs. Jax Cordova, Alley, Bohlander and Chael Cordova all crossed the plate two times each.

The youngsters on the team, Luke Barnett and Jax Cordova, each pounded out a double.

Alley, Buller, Will Barnett and Bohlander each had 2 steals. Luke Barnett, Chael Cordova, Eder, Gourley and Jax Cordova had one steal apiece. The Eagles ran crazy on the base paths with 13 stolen bases.

It would be a slow start for the youngsters from Colorado that sealed their fate in Sunday’s semifinals. The Eagles watched the game slip away early and couldn’t recover losing 10-3 to the Perryton Rangers, the team they defeated the day before. The Texas group scored off of two errors in the first inning and the Eagles could not recover.

The Eagles had 4 errors in the game.

When Eads went to the plate in the bottom of the first their usually deadly top of the lineup struggled, and they went down after just four batters scoring no runs.

Perryton scored 3 more runs in the top of the third and the Eagles could only answer with a single run trailing 6-1 after two innings.

But Perryton turned up the heat getting four more runs in the top of the fourth and Eads only answered with two ending their chances to advance.

Gourley had 3 stolen bases while Alley and Sierra each committed one theft.

Summer ball is now officially over for all the area teams as the players will hang their baseball gloves and cleats and prepare now for the fall sports season.