As the new basketball season approached, the Kit Carson Lady Wildcats set goals for their team to guide them on their new endeavor.  They wrote their list and checked it twice as they set forth into the 53rd Annual Lamar Holiday Tournament.

On the first night Kit Carson faced the Walsh fighting Eagles.  The Cats, determined as they came out with their rummy tum tums growling the first half, put up 33 points against Walsh’s 17.  Tess Hornung had a double-double with 12 points and 10 rebounds.  Olivia Isenbart contributed 14 points, and junior Paige Johnson, with her work-hard attitude, battled in the paint, bringing down 5 rebounds.  True to the spirit of the Wildcats, assists were a huge part of the success and senior Shayla Bogenhagen dished 4 into to her teammates, with McKenzie Smith following suit.  Sliding down the court the first night with a win (52-28), the Cats would make it to the semi-final round of this three day event. 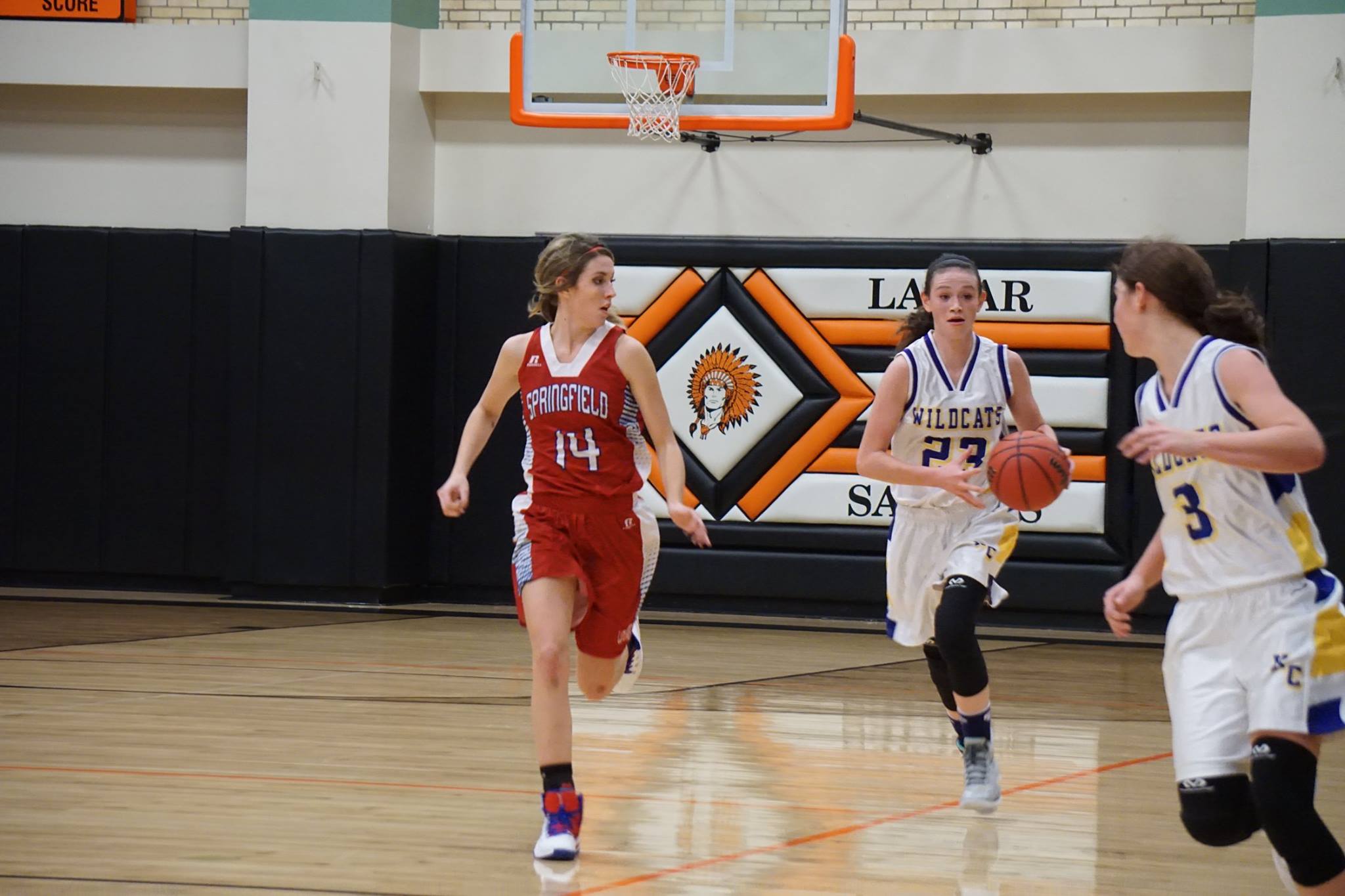 On day two of Holiday Tournament action, the Lady Wildcats had visions of success dancing in their heads as they took on the Springfield Longhorns.  In the first half their defense kept the Longhorns in single digits, and the second half the Cats were more rapid than Longhorns, scoring 28 points to close out the game. Impressively, KC shot 82 percent from the free throw line:  Josie Hornung, O. Isenbart, and Reyna Isenbart, were perfect from the line, while T. Hornung sank 6-7.  M. Smith lit up the three point line, shooting 2-2.   The Wildcats’ hops and long wing spans kept the Longhorns out of the paint.  As a team, Kit Carson pulled down 35 total boards, the same as the night before.  With the win under their kerchief (55-22), the Lady Wildcats settled down for a nice Cat nap, preparing for the championship game against their feline nemeses from Holly. 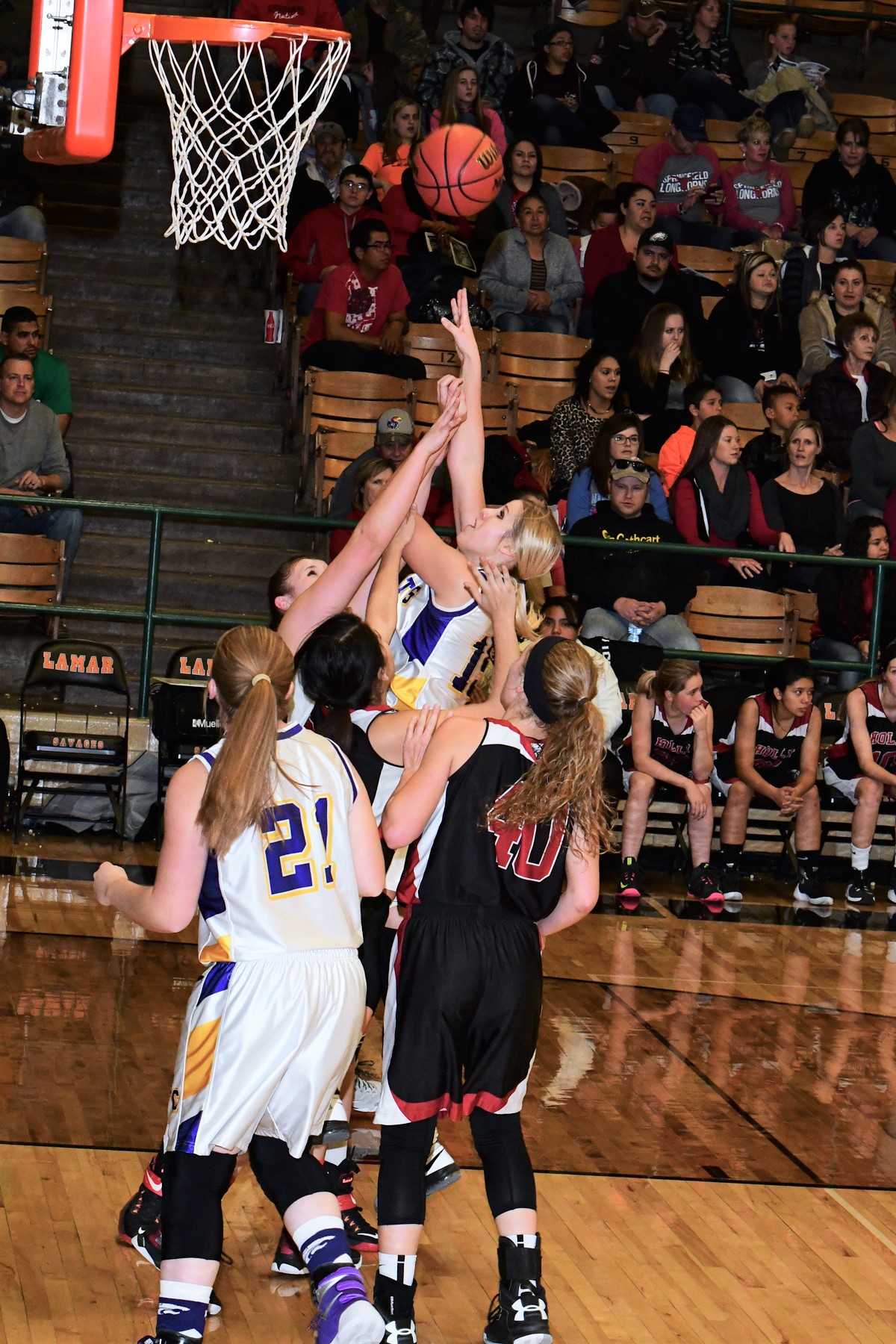 The new-fallen snow and blustery temperature of the championship day added to the holiday spirit as the purple and gold Wildcats would take on the red and black Wildcats.  The Purple and Gold sprang from their bench and flew down the court in a flash.    To Holly’s wondering eye, 4 Kit Carson players decorated the board with double digits:  R. Isenbart (14 points), T. Hornung (13 points), S. Bogenhagen (11 points), and Haley Johnson (11 points).  Bogenhagen and Haley Johnson clattered from the three- point line, each making 3 baskets from the arch.  The Lady Wildcats eye’s twinkled as they looked for their teammates—18 assists (the most during their holiday championship run) would be dished to various peers, contributing to a true team effort.  Prancing and pawing with each board, EVERY Wildcat would get a rebound:  R. Isenbart (11), O. Isenbart (8), T. Hornung (5), Bogenhagen, Smith, Josie Hornung (3), P. Johnson and Emily Weber (2), H. Johnson (1).  The Carson Hoopsters hung their stockings with care, leaving everything they had on the court to finish out this weekend of round ball rumbling with a championship score of 69-26.

The Kit Carson Lady Wildcats would like to thank everyone who ventured out on this blustery weekend to join them on their sleigh ride to a 3-peat.  They wish everyone a Merry Christmas and a happy and joyous New Year!