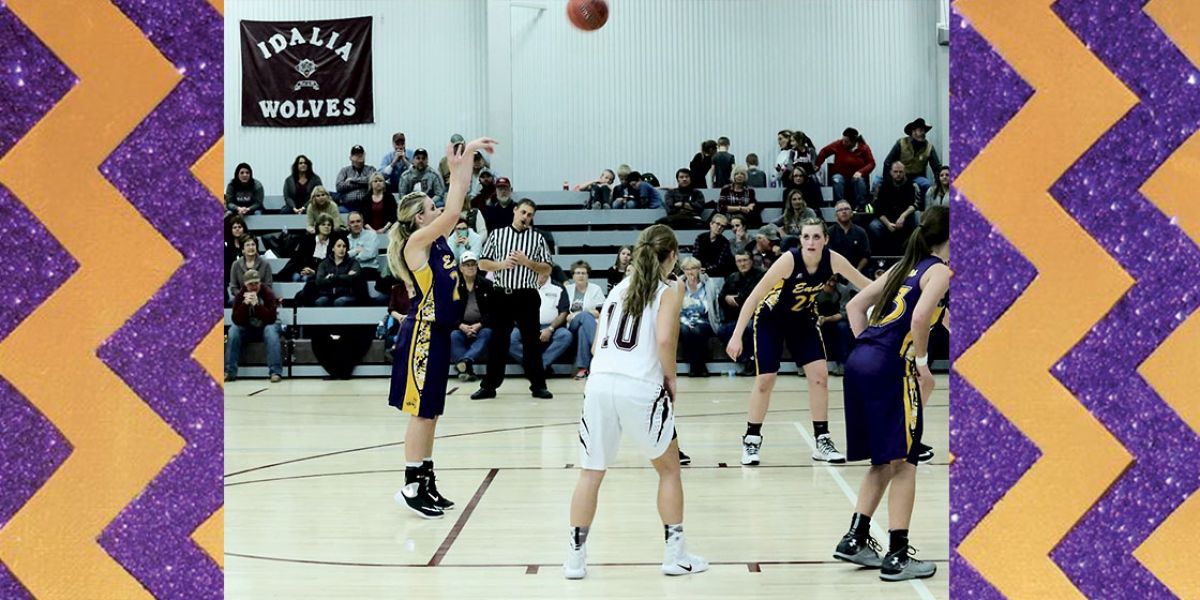 Miranda Mitchek at the free throw line against the Lady Idalia Wolves. Mitchek would end up with 9 points, including a couple of long balls. Photo © Holly Mitchek

The Eads Girls’ Basketball team, now 7-3 on the season as we near the midway mark, had another very effective weekend defeating two quality teams. They first traveled up north to Idalia and took on a Wolves team that were state champions a couple of years ago and are enjoying a strong girls’ basketball tradition. In an exciting finish, Eads gained the lead, and held it, in a 42-39 victory. They then finished up the successful weekend with a strong win over a tough Otis Bulldog team on the Eagle court, winning 45-34.

Conference play begins next week. The Eads girls are in a very tough league as the #1 ranked team in the state, Kit Carson (8-0) and the #9 team in the state, Cheyenne Wells, are conference foes that the Lady Eagles will need to beat to get to the Regional Tournament. Eads will start their challenge next week as they travel to Cheyenne Wells to take on the Lady Tigers on Friday. This will be a key game for both teams. Eads then finishes the conference weekend hosting the Granada Bobcats on Saturday. Granada is currently sitting in the basement of a very tough league, but is currently playing strong. 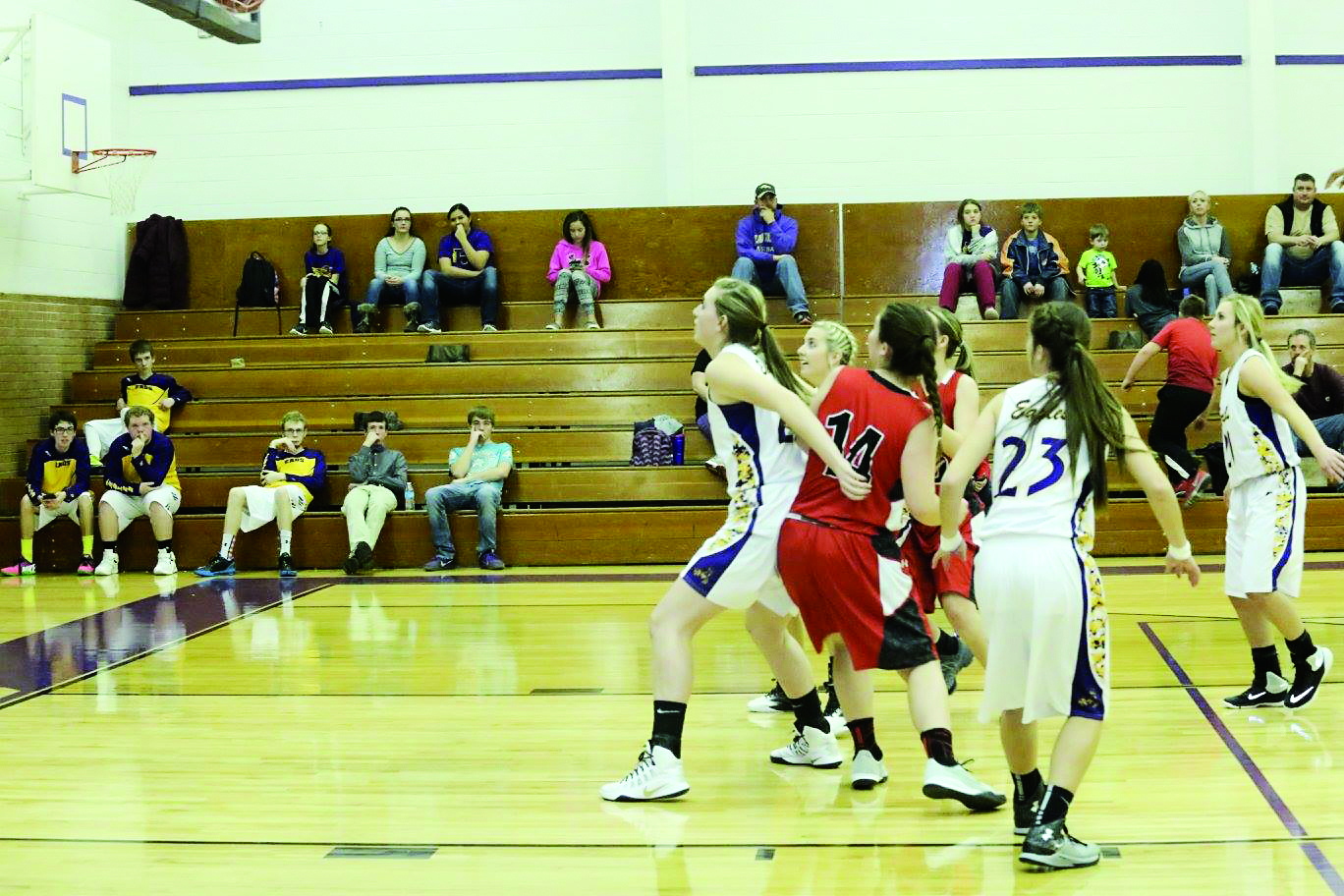 In Idalia, Eads’ Mariah Smith led the Lady Eagles with a double-double scoring 14 points and pulling down a phenomenal 15 rebounds. The 6’0 junior was also key in the defensive paint as the smaller Lady Wolves struggled to get the ball inside against Smith.

Eads started out in a decent way scoring 10 points behind two put backs by Smith and a couple more jumpers by sophomore Hadlie Rittgers. However, Eads’ 1-2-2 zone struggled to find the shooters from Idalia in the first quarter as three different players, Alex Weyerman, Megan Waitman, and Faith Carpenter all hit three balls to start the game. After the first quarter, Eads was trailing 13-10. Weyerman would hit a second of her three long balls in the game during second quarter action and the Wolves’ guard, Breann Schaffer, would hit three jumpers to keep the offensive production going.

They would outscore Eads, 11-9, despite a long ball and a jumper by sophomore point guard Miranda Mitchek and a couple of buckets by Smith and Kaylee Wilson. By halftime, Eads trailed by 5 in a low-scoring 24-19 game.

Eads came out after halftime adjusting their defensive efforts and it paid off as they held the Lady Wolves down to just 6 points while Brenna Rouse hit her first of two long balls in the third period and Smith, Rittgers, and Wilson continued to be hot contributing to 13 points and the lead, 32-30, after three periods. The fourth quarter was an exciting one as Rouse and Weyerman exchanged three balls and Idalia could not manage to stop the effective triangle of Smith, Wilson, and Rouse. Rittgers would get a key bucket down the stretch off a back side rebound. Eads only allowed Idalia on the line for two free throws throughout the entire game which was key to their success.

Rittgers joined Smith in scoring in double figures hitting for 10 points and adding 4 boards; Mitchek had 9 points including a couple of long balls and she also did a great job running the team dishing off 6 times for a bucket.

Eads took their strong win back home and brought the intensity on Saturday night when the Otis Bulldogs came to town. The Eagle girls found themselves in another scrap for the second night in row as they again trailed, by a single point, 21-20, at the halfway mark. Wilson carried Eads in the first quarter hitting for three jumpers and was one-for-three from the line. Mitchek and Smith would assist her and after one Eads led, 13-11. But a bad second quarter lost Eads the edge at the intermission. Again, the Lady Eagles adjusted their defense at halftime, and they held down their opponent in the third period with the Bulldogs only producing one long ball and a single free throw. Rouse matched the long ball and Wilson continued to be hot with two more jumpers. Smith would be the key to Eads’ win as she went off in the fourth quarter and the Bulldogs could not find a way to stop the effective triangle of Smith, Rouse, and Mitchek. Eads had control of the game in the final crucial minutes and forced Otis to foul. They would wrongly choose to foul Mitchek who went a perfect 4-for-4 from the line down the stretch. 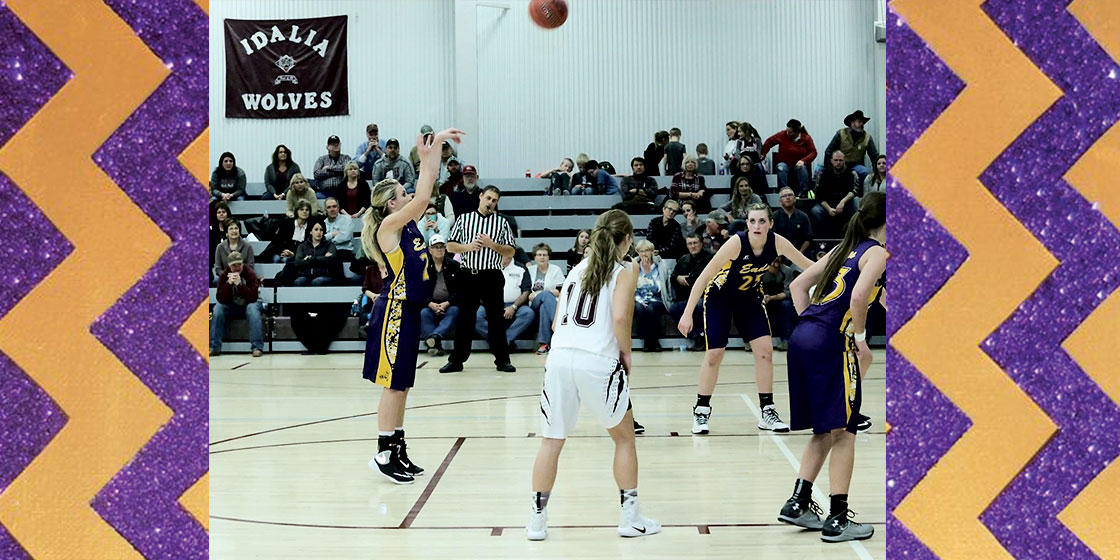 Smith, again, led all players with 15 points (1-for-2 free throws) and pulled down 7 boards. Wilson threw in 13 points for Eads, while Mitchek was a perfect 6-for-6 from the free throw line, scoring 9 total. She would have 4 assists in the game, while her counterpart point guard, sophomore Lauren Spady added 5 assists to the Eads attack.

The JV girls were happy for the chance to play a couple of games over the weekend and would beat Idalia, 27-25 in overtime. Lauren Brown led Eads with 8 points, and Morgyn Johnson had 5 points. On Saturday they lost another close one to Otis 25-23, with Kaycee Ellenberger hitting for 13 points. Next week games start at 4:00 in Cheyenne Wells and 2:00 on Saturday in Eads for the Granada game.