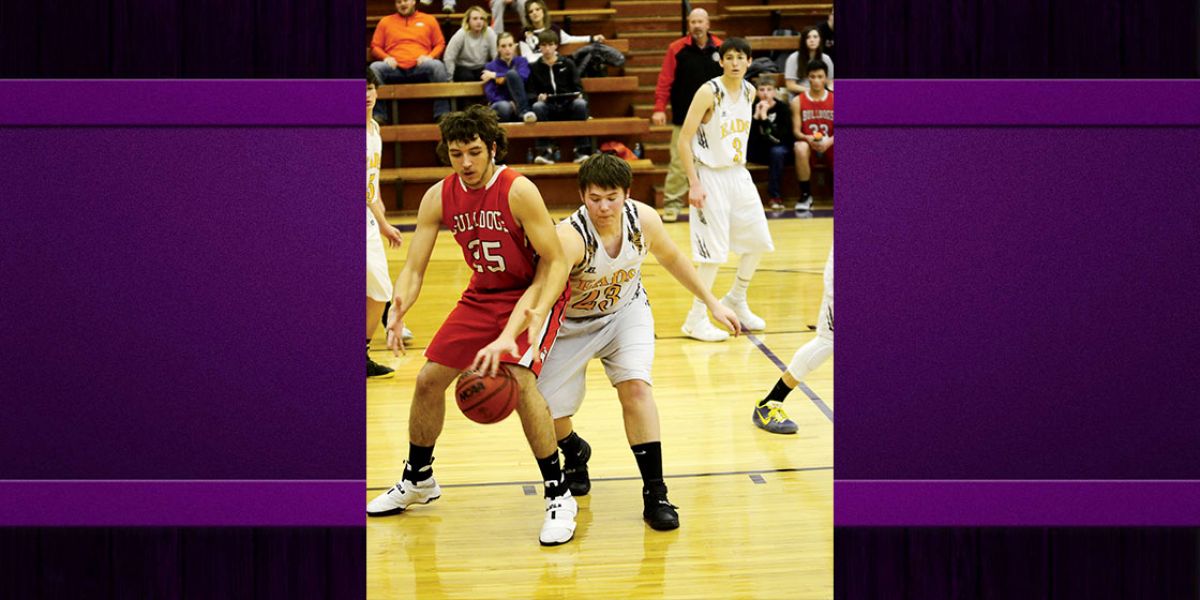 Cameron Crow and the rest of the Eads Eagles would run into foul trouble in both of the games this past weekend. Photo © Marty Miller

The Eads Eagles had another tough weekend on the court as they dropped two non-conference games. On Friday they traveled to Idalia and lost big to the Wolves, 65-46. They then hosted Otis and allowed senior Mario Dracon to score 30 points on the way to a 64-40 loss to the Bulldogs. Eads is now 5-5, and it is now time to prepare for the meat of the schedule this coming weekend when conference play begins. 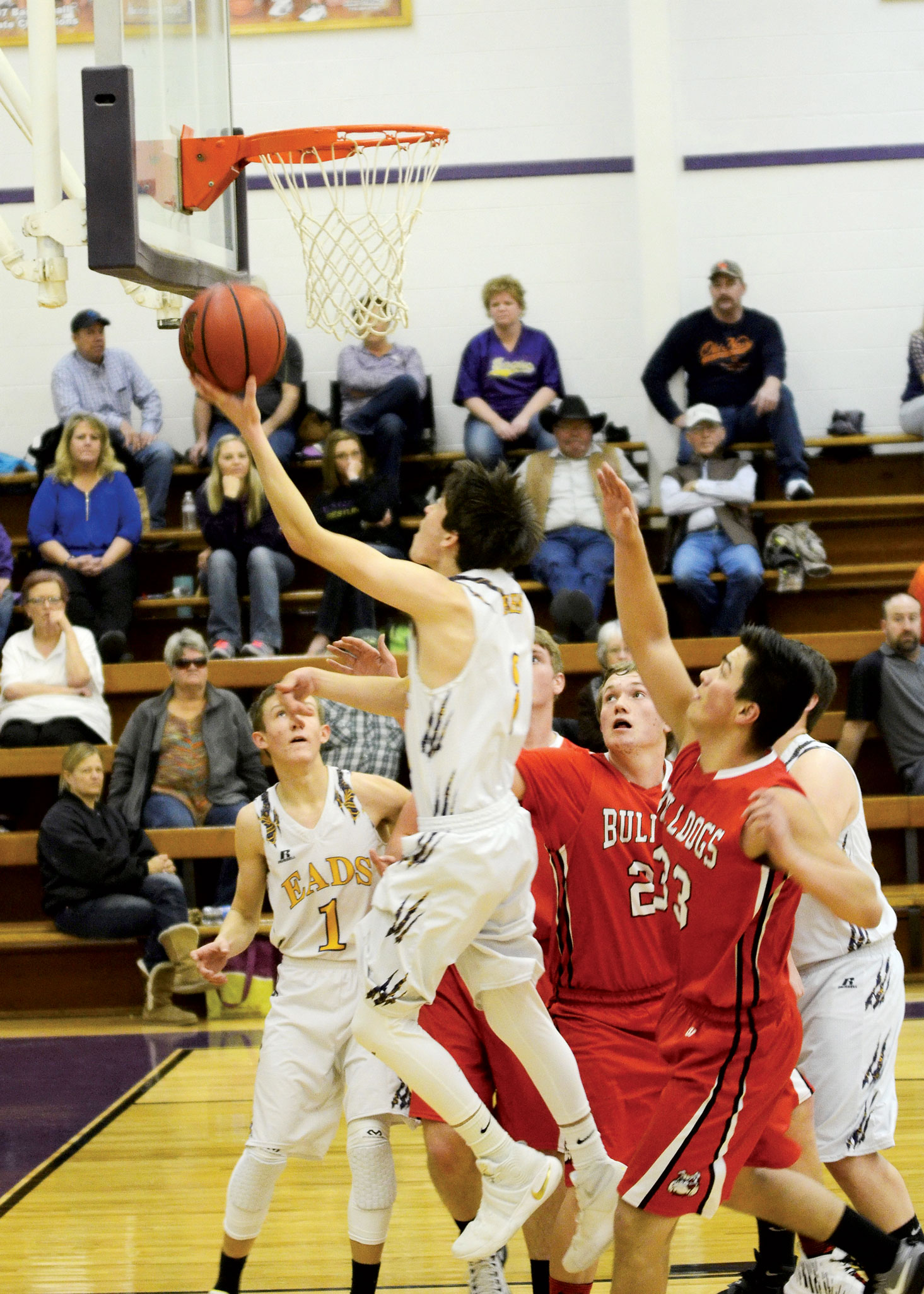 Eads will have to travel to take on #1 Cheyenne Wells, who moved up in the ColoradoPreps state polls over the weekend, moving ahead of #2 Holly. Recent comparative scores are the reasons why as both teams played Cheraw this past week.  Cheyenne Wells topped the Wolverines by 34 points on Friday and Holly picked up a seven-point decision on the road Saturday. Then it doesn’t get any easier on Saturday night as the always tough Granada Bobcats come to town.

In Idalia, Eads started slow as they came out unfocused on both sides of the ball allowing the Wolves to jump out to a 20-6 start. Four three balls were tossed in by Idalia with little objection from Eads in the first period. Trey McDowell got his first start for Eads and held the Eagles together hitting an early three-ball and a deuce. Zach Haase chipped in a free throw. Eads turned on the “O” button into the second quarter as Haase threw in a three -ball, followed by Stephen Wilson with a second one. McDowell was hot hitting another three in his second-long ball of the half. The rest of the team also contributed with Damian Hernandez hitting a deuce and going two-for-two from the charity line. Fred Turner duplicated Hernandez’ effort. But, unfortunately, the “D” button didn’t get turned on yet and Eads continued to allow the Wolves to score seemingly at will. A total of 8 Wolves’ players chipped into the score in the second period. By halftime, Eads was in a hole, 37-27. Eads then played Idalia straight up even into the third period as each team scored 10 points. The Wolves’ Charlie Bator hit for six of his 21 points in the third period. For Eads, Wilson hit a deuce and two charity shots while Turner added a three ball in the third. But it would be a nightmarish fourth quarter for Eads that shut the door as foul trouble got the best of them. Hernandez, Crow, and Wilson all fouled out and Turner ended up with four fouls. During that fourth quarter, the Wolves would be on the free throw line 21 times alone. Idalia outscored Eads, 18-9, taking advantage of the free throw line. 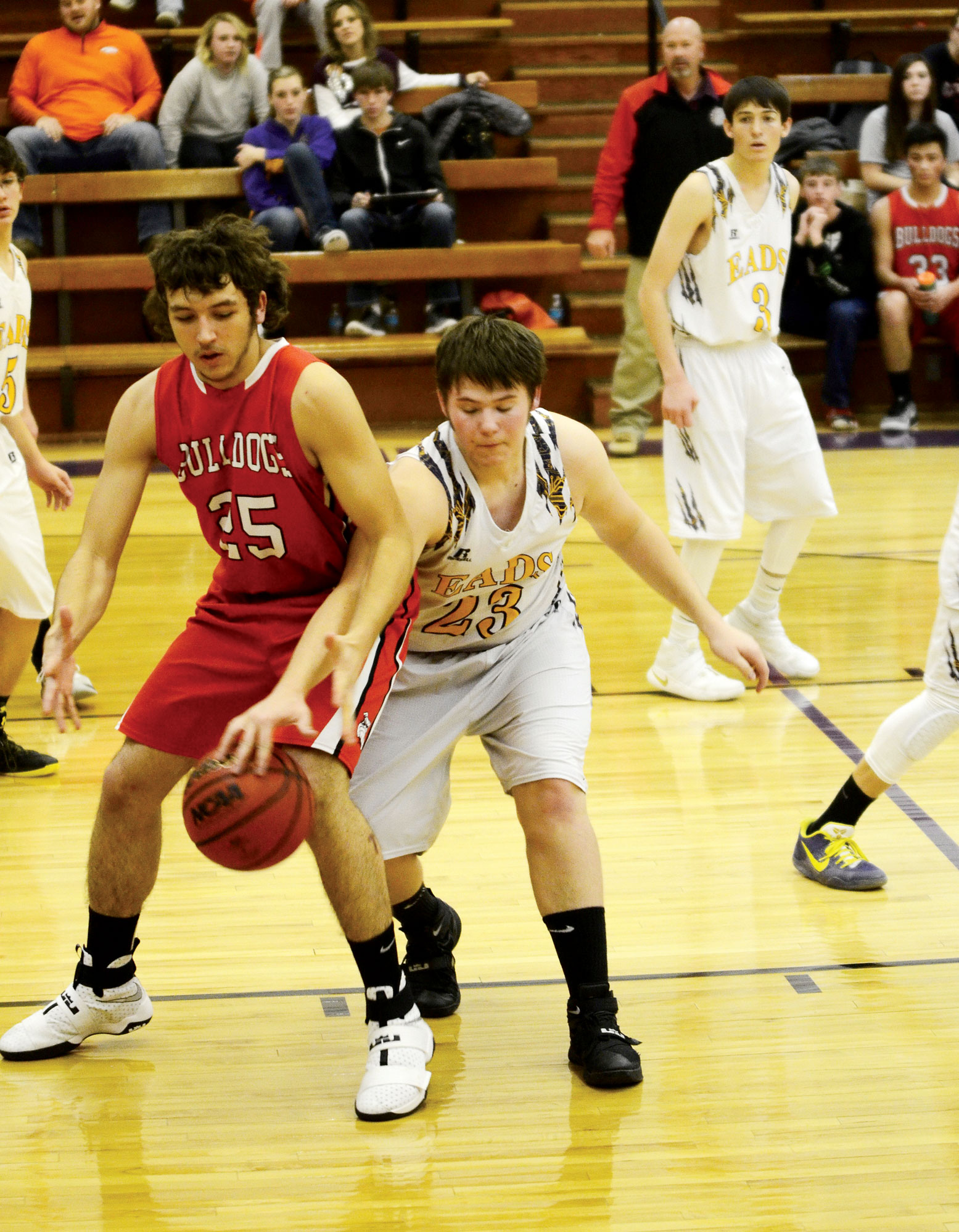 Hernandez scored 11 points and pulled down 8 rebounds. He would go 3-for-3 from the free throw line. McDowell hit for 10 more points, including two three balls.

Things didn’t get any better on Saturday night as Otis used a 17-for-26 free throw advantage to defeat Eads 64-40. The story of the night was senior Mario Dracon who scored 30 points against Eads. All of Dracon’s points were created in the paint and within 15 feet from the basket. Eads played Otis pretty well throughout the first half, but they struggled to control Dracon. In the first period, Haase hit for a couple jumpers and a three ball, while Crow and Turner each hit a field goal. Eads trailed 14-11 after one. In the second quarter, everyone on the court for the Eagles scored including a trey by Wilson; but, again, Otis got the better of Eads by three points and at the end of the first half the Eagles trailed, 28-22. Things looked promising for Eads, but the second half was dismal as the scoring and intensity of defensive effort went into the gutter. Otis outscored Eads 20-12 in the third, and 16-6 in the fourth, and the game was over due to lack of effort.

Haase had a good game for Eads hitting for 16 points, including 2 long balls, and pulling down 7 rebounds. Turner hit for 8 points and pulled down 10 rebounds. Turner, for the second night in a row, was in foul trouble and would ultimately foul out with eight points and 10 rebounds. Wilson hit for two long balls. Otis utilized the strong play of two players who controlled the game including Dracon with 30 points and Cullen Glossen who hit for 14 points.

Eads’ JV group played this weekend as well. They would lose to Idalia 35-13 with Keaton Coen leading the way with 5 points and Blake Stoker with 4 points. In the Otis JV game Blake Stoker scored 7 on the way to a 44-23 loss.