Eads Girls in a Groove as they Start Conference Play

It was the first week into the conference section of the schedule for the Eads Lady Eagles and right away they had to travel to Cheyenne Wells to take on a well-coached and athletic team that seems to be up-and-coming lately.  They then hosted the much-improved Granada girls in Eads on Saturday night.  Eads managed to pull away with two important conference wins beating the Lady Tigers on Friday, 42-35, and then dominating the Granada Lady Bobcats, 64-33, on Saturday night. 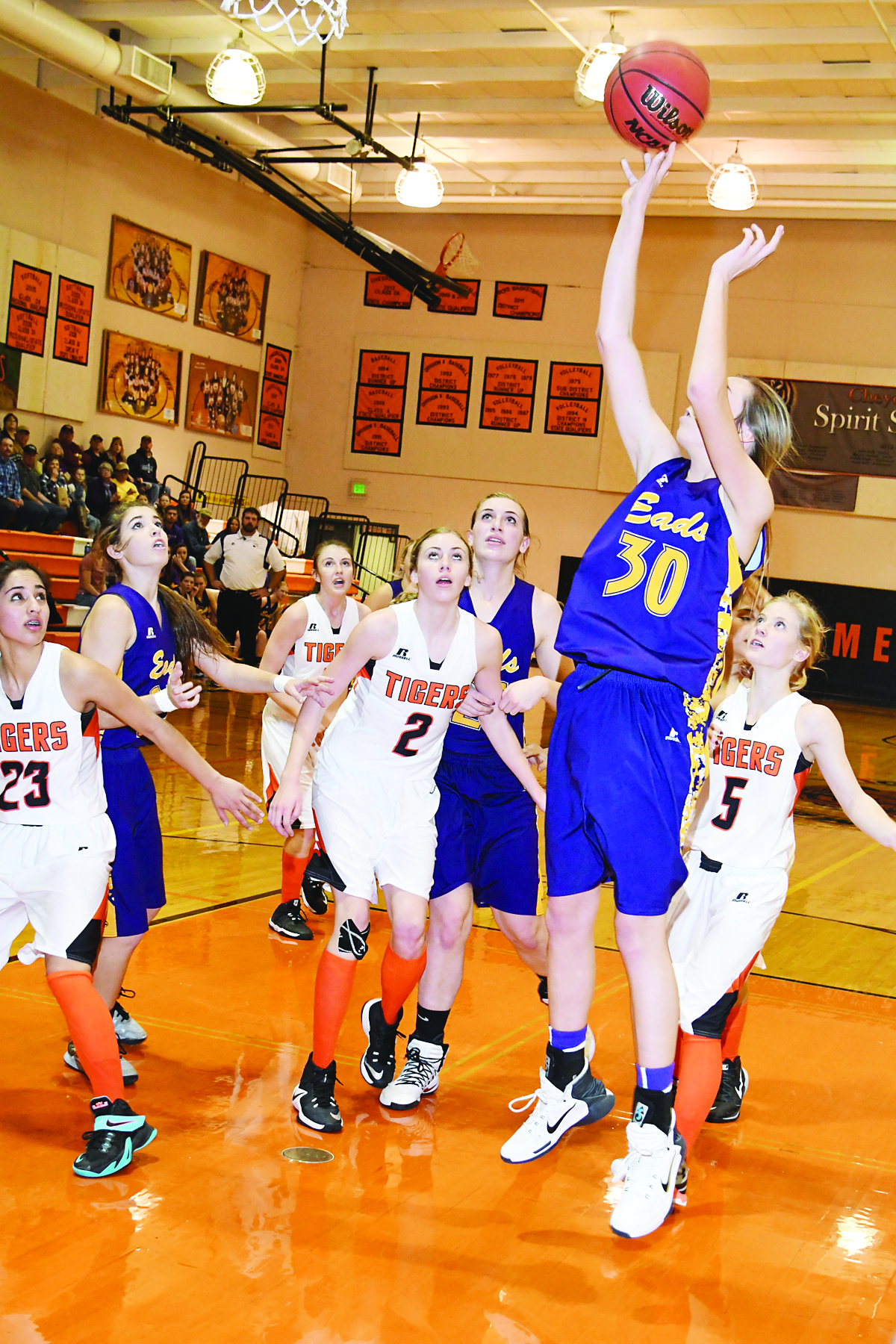 Trey Eder’s group used a very effective inside-outside game between wing Kaylee Wilson, post Mariah Smith, and point guard Miranda Mitchek to disrupt the tough defense put on by the Cheyenne Wells Lady Tigers.  It did take Eads awhile to get going as the Tigers speed and aggressive defensive play took some getting used to for the Eagles.  After the first quarter Cheyenne Wells had the lead 9-6.  Scoring for Eads came from the guard position with only Wilson and Lauren Spady find the hole in the starting stanza.  But the Lady Eagles got going in the second period as the in-and-out game kicked in and Wilson and Smith controlled the pace.  Wilson hit a long ball and a couple of deuces while Smith hit for three jumpers in the second quarter, two coming on offensive put backs.  Eads’ 1-2-2 defense struggled to find the Tiger shooters as hot-handed guard Skylar Zieglar found three-point land twice in the quarter.  By halftime, Eads trailed by a single bucket, 21-19.

Again, as in the past, Eads made some good adjustments in the locker room that translated in big defensive stops on the court during the second half.  Zieglar did find the long-ball touch two more times but the rest of the team was virtually shut down as Smith and Brenna Rouse controlled the paint and the boards.  Offensively, Wilson hit a single trey in the third period and added two more, four total, in the final stanza.  Smith continued to dominate the paint with six more counters and Mitchek took care of the ball and the charity line down the stretch going a perfect 4-for-4 to seal the deal for Eads.

Wilson led all scorers hitting for 20 points including four from three-point land; while Smith had another double-double hitting for 12 points and pulling down 13 rebounds.  Mitchek added six points and three assists while Rouse added four more contributions for Eads. 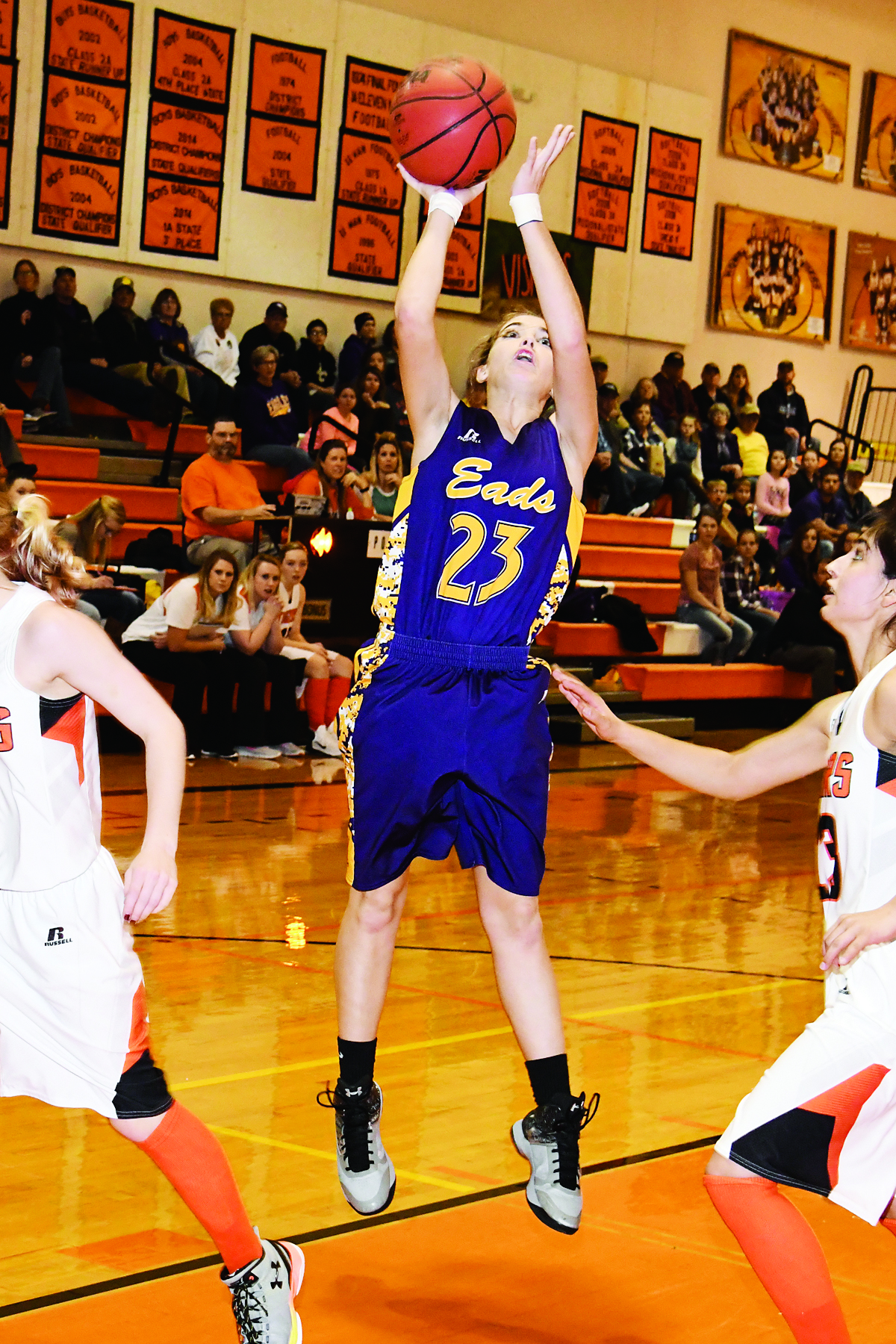 The Eads girls continued their effective teamwork into Saturday night’s game with Granada controlling the Bobcats’ best player, Tarin Kemp, to 15 points on the night including six-of-eight free throws.  Otherwise, the Eagle zone caused havoc for the Green.  Everybody for Eads saw time on the court as Eder played his bench liberally in the second and fourth quarters.  The Mitchek-Wilson-Smith triangle continued to chip away offensively against the Bobcat defense as Mitchek had 7 points in the first period and Smith and Wilson kicked in two jumpers apiece.  Sophomore Hadlie Rittgers had a very effective game for Eads as well.  After the first period, it was a run-away with Eads leading 19-9.  The Lady Eagles’ scoring slowed down some in the second period as the bench played quite a bit.  Smith continued to hold down the paint against the smaller Bobcat players and put in a couple more jumpers on offensive boards.  At halftime, the Eagles controlled 30-16.  Eads fouled quite a bit in the second half putting the Bobcats on the line 24 times.  They hit 12 of the charity shots, ultimately helping them to stay in the game.  Smith would absolutely dominate in the third period hitting for 10 points in field goals and another charity shot.  Eads would lead after three complete quarters, 48-25.  The fourth quarter saw the Eads bench continue to control the Lady Bobcats with Brooklynn Jones hitting for three jumpers and the bench scored at an excellent 18-point clip.

There were many players for Eads who had good games in this contest, but Smith would lead all players getting yet another double-double with 20 points and 11 boards.  Mitchek also had an all-around great game hitting for 13 points, including being perfect for the second night in a row at the free throw line hitting 5-for-5, had 3 assists and four rebounds; Jones, Wilson, and Rittgers all had seven points.  Wilson and Spady pulled down 4 boards each, while Rittgers dished three times to her teammates.

Conference play will be put on the back burner this coming weekend, but the action doesn’t get any easier as Eads faces to southern division teams, Wiley and Kim/Branson, both of who are making a strong bid for the Regional Tournament.  Wiley beat Eads in the Lamar Holiday Tournament in December as the Lady Eagles were without the services of Mitchek who was injured.  Eads will be looking to revenge that loss on Thursday in Eads.  Then the Purple & Gold travels way south to Kim on Friday night to take on the undefeated and #4 ranked team in the state.  Both game times are slated for 4:00 pm.