Written by Betsy Barnett on 27 July 2016. Posted in Sports 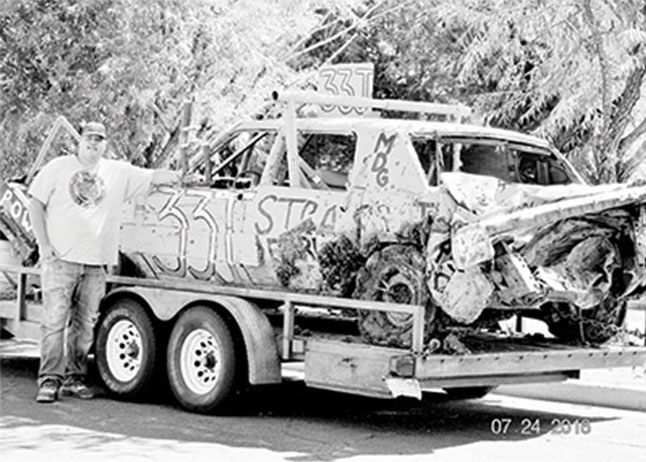 Justin Lenox of Eads, Colorado ventured over to Syracuse, Kansas to compete in front of a packed arena in the Hamilton County Demolition Derby on July 23, 2016. Lenox has spent the past year building his car to get it competition-ready, and all that work became worth it on this night. Lenox's car was a 1977 Lincoln Continental. He was drawn into heat one along with six other competitors and had good luck driving well to qualify for the full size car feature directly out of the heat, instead of having to go through a consolation heat.

After the first heat, Lenox and his crew Jason Lenox and Bradley Hopkins went to work on getting the car ready for the main event. After a short rain delay and grooming the track the action fired back up to compete for over 1,500 fans who filled the stands. Following the rain delay the rest of the heats ran without pause. Finally, the time had come for the main event as 9 cars pulled into the arena to square off one last time before the night’s end. After a hard fought battle and almost 15 minutes of smashing cars, Lenox came out on top with a first place finish.
After Lenox’s championship, his sister, Brooklyn Lenox, climbed into the champion car and entered into the powder puff heat, which is an all-female driver heat.  Her competitive personality took over as she ended up second place. She made her presence known, making some extremely hard hits.  Finally, the little guys took a turn at bashing their cars into each other in the Power Wheels Demo Derby and another local, Justin Johnson, who will start Kindergarten in a couple of weeks, competed in that event.  Despite losing his front wheel in the derby, his mom says he’s now hooked.
Lenox commented, with his large championship trophy in hand, that, “Demolition derby is more than just an event that brings people together, it is family fun at its best. And I’m just happy to win the purse and still have a car that runs.”