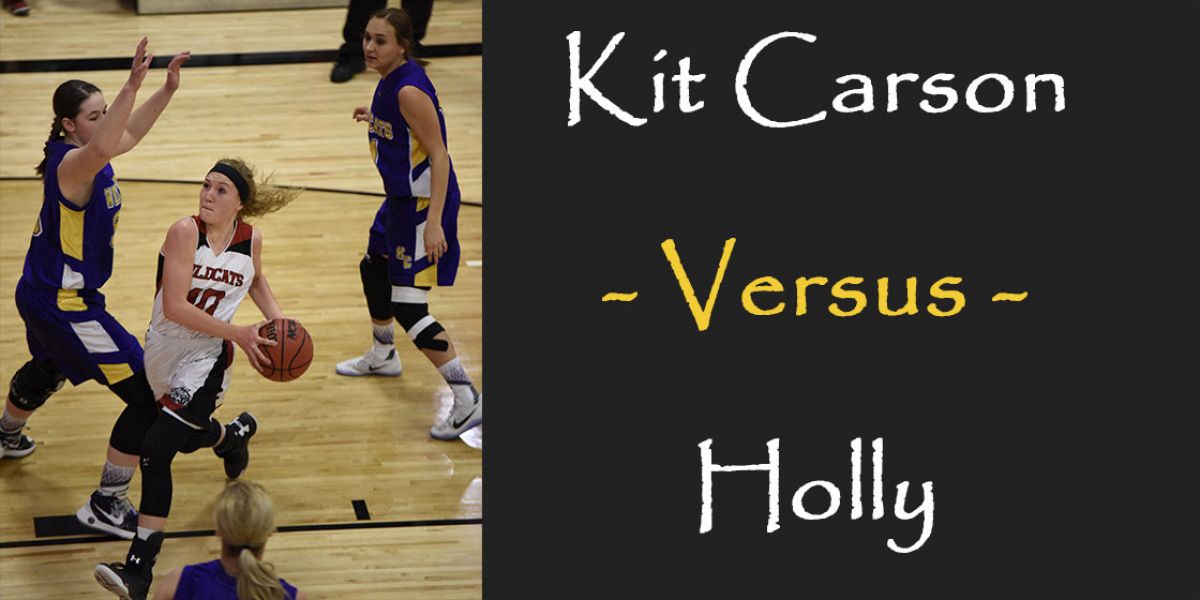 Rough Road is no Hindrance for Kit Carson

This past week the Kit Carson Lady Wildcats took on two quality teams from the south region.  McClave would ride the highway north on Friday night to battle for a district seeding spot.  Saturday would find the Wildcats from KC on the road to take on the 10th ranked Wildcats from Holly.  Exciting basketball ensued! 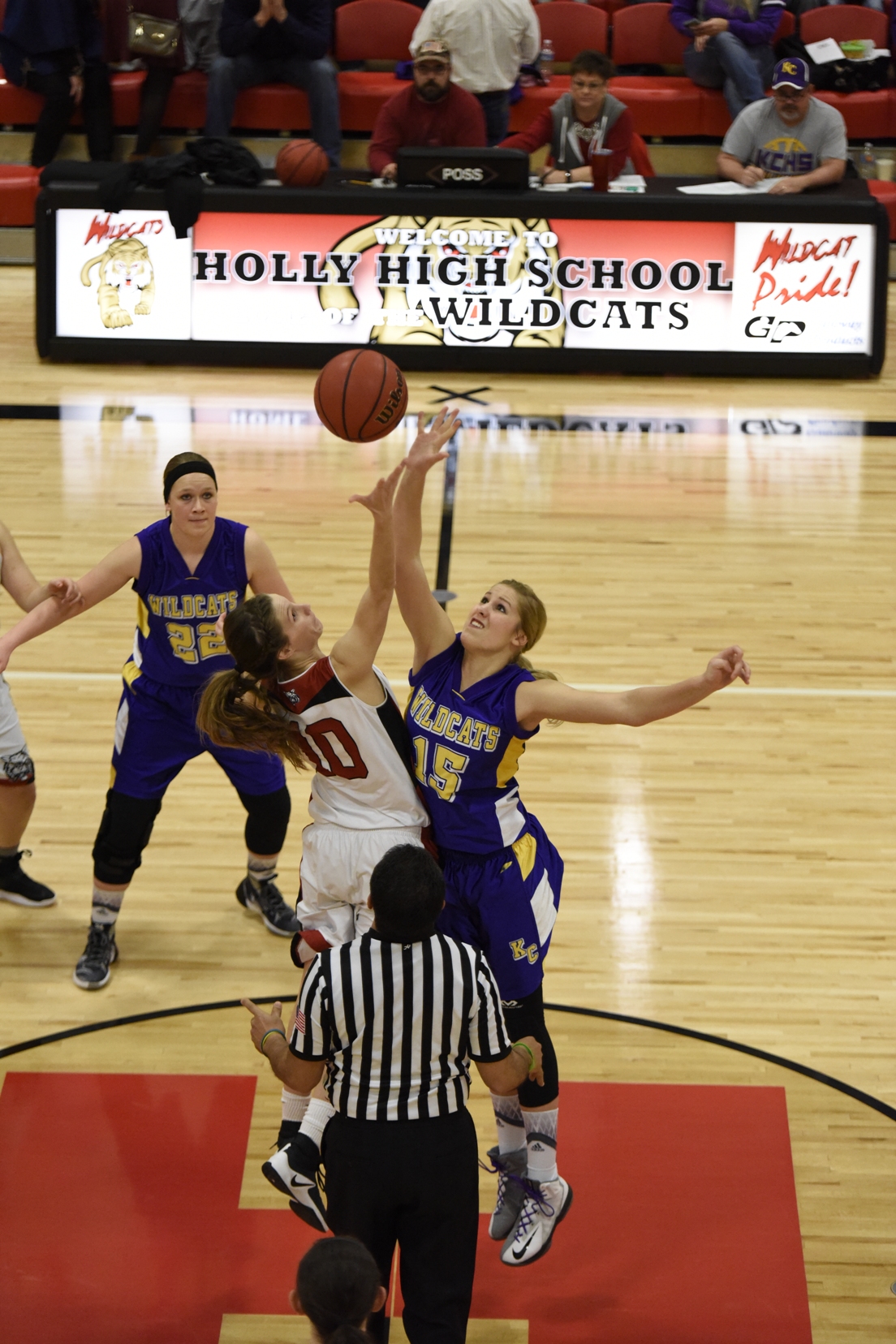 Kit Carson came out strong against the Cardinals, passing and pushing the ball up the court in true Wildcat form.  The Lady Hoopsters put 26 points up the first half, allowing McClave only 6.  As the second half rolled on, Kit Carson held the pedal to the medal and lit up the board with 16 points the third quarter.  The last quarter, McClave outscored the Cats 15-8, but it was too late to pass Kit Carson, as a double yellow line was already established.  As usual, the scoring for the Kit Carson Wildcats was spread throughout the team:  Tess Hornung scored a season high 16 points, while Micayla Isenbart contributed 9.   Olivia Isenbart (8 points) and Reyna Isenbart (6 points) would battle against an aggressive McClave team.  Emily Weber went 2-3 from the field and added 4 points to the total.  Haley Johnson, McKenzie Smith, and Josie Hornung put two points on the board, and Shayla Bogenhagen added a free throw to the mix.  Rebounding was a key factor against this tall and aggressive Cardinal squad, but true to form, all Cats did their job to protect the paint.  T. Hornung would lead with boards with 7, 5 from the defensive end.  R. Isenbart would sky to the defensive hoop and pull down 4 more.  Hustling for position, Bogenhagen and H. Johnson ripped 3 from the hands of the Cards, while M. Isenbart, O. Isenbart, and Smith would battle for 2 more each.  Getting in on the action, J. Hornung and Paige Johnson each grabbed a board to add to the 25 the team had as a whole.  With lightening reflexes, Smith would strip 4 steals from the traveling Cards, adding to the McClave frustration of the night.  The Cats would come out ahead with a final score of 50-29. 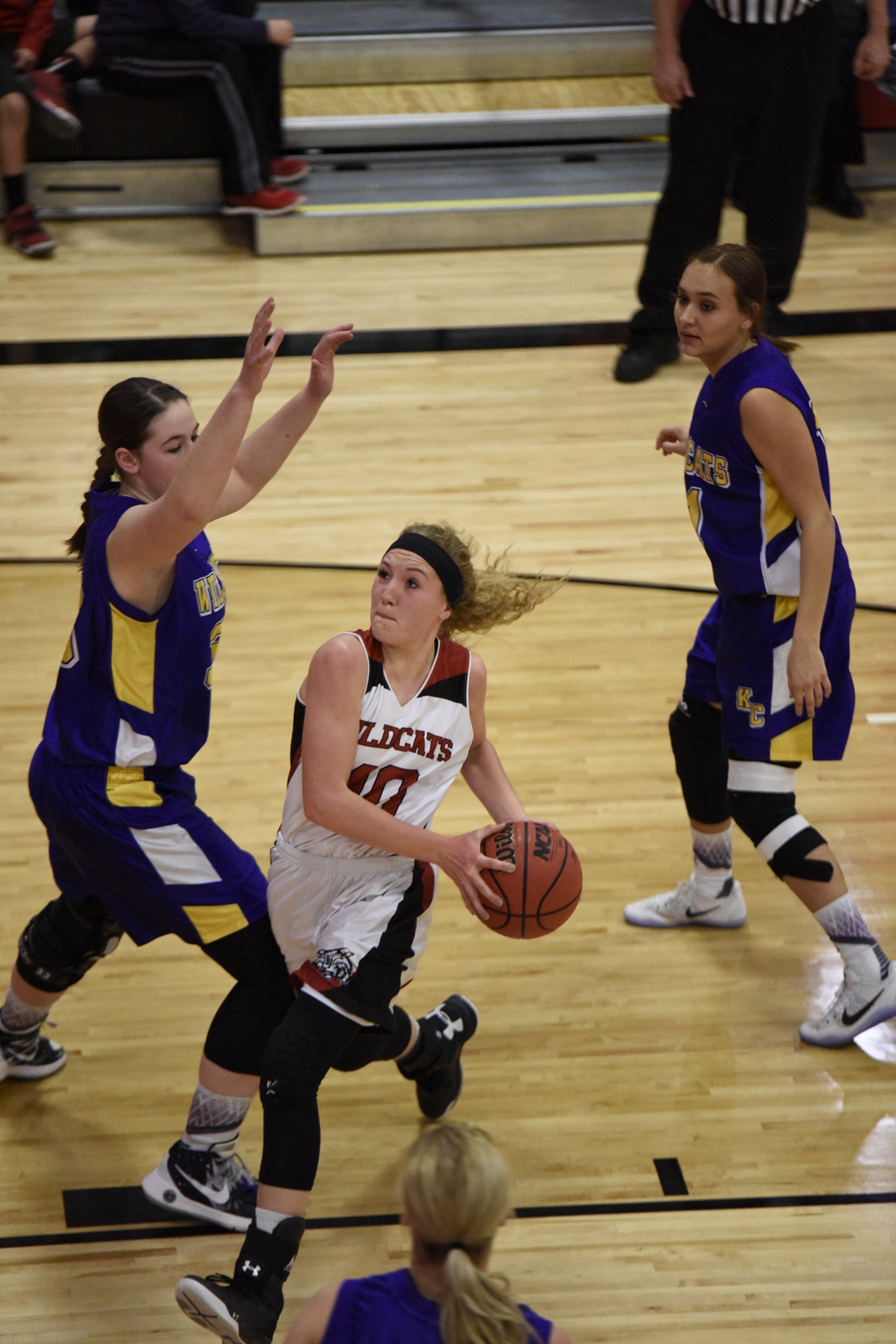 Saturday brought more aggressive basketball from an energetic and ambitious Holly Wildcat team.  The Wildcats from the south pulled out on the road with a mission and destination in mind.  The Kit Carson Cats quickly found themselves trailing much of the first quarter, only to finally pull ahead at the end of the first, 15-13.  Outscoring Holly the second quarter, 13-8, helped build some breathing room.  The second half, aggressive play was the name of the game and the Cats would have to kick it into 4th gear to pull ahead.  Turnovers would be a road block for the Cats, but only allowing Holly to score 8 points the second half was a huge accomplishment on this road trip.  This allowed the Cats to gain composure and play their style of basketball.  Bogenhagen and O. Isenbart rallied the troops as they stole the ball from their opponents 8 times combined. Three Lady Cats scored double figures:  M. Isenbart would come out with 17 points on the evening.  O. Isenbart battled hard in the paint, making some tough moves and lighting the board up with 14 points.  T. Hornung, protecting the paint and pushing the ball up the court, added 10 points to the total.  Focusing on their height, the paint was a place that only the Northern Cats would be able to control.  M. Isenbart would grab 7, while R. Isenbart and Smith ripped 6 each from the opposing Wildcats.  O. Isenbart grabbed 5 more, 3 of which were on the offensive end.  T. Hornung used her long arms and denied Holly with 4 more boards.  With a surprising score of 59-29, the Cats added a hard fought “W” to their win column.

This next week will test the Kit Carson Wildcats endurance at this point in the season.  Thursday they hit the road north to take on the Stratton/Liberty Knighted Eagles.  Friday they will stay home and host the Bethune Bobcats.  The Cats will close their weekend at home against the always exciting match up of the Springfield Longhorns.  If you have your motors running, come and join in on the joy ride, as the Cats battle another week to get closer to that waving flag.