It was a tough weekend for the Eads Girls’ Basketball team as they struggled against two good teams from the southern district and came away empty.  On Thursday night they hosted Wiley and came away with a disappointing, 43-36, loss.  They then traveled to take on the #4 and undefeated Kim/Branson group losing in one of the bigger deficits thus far this season, 45-21.

The Lady Eagles are now 9-5 on the season.

Eads and Wiley had squared off at the Holiday Basketball Tournament in December and at that time the Panthers got the upper hand in a close game.  Eads didn’t have the services of their starting point guard Miranda Mitchek.  The Lady Eagles had been on a roll of six straight wins coming up to the Wiley game and fans thought this one might go the Lady Eagles’ way.  However, despite a close game, in the second half the Panthers got the better of Eads and came through to win the contest.  Both teams’ defenses were very difficult to score against as Eads’ 1-2-2 zone and Wileys 1-3-1 zone forced a number of long shots and bad passes on both sides of the court.  Kaylee Wilson would start out the scoring with a long ball and Brenna Rouse would duplicate her feat.  Mitchek, who has a high free throw percentage, came through in the first quarter with three charity shots.  However, Wiley is a big, physical team and Eads’ post Mariah Smith got into immediate foul trouble and was forced to sit the bench early.  Without Smith’s large presence in the paint, the Lady Eagles began to struggle.  After the first period, Eads had scored nine, and the big girls from Wiley, Diana Morales and Malin Lindholz, had just warmed up putting in nine points, as well.  But it would be the second quarter where Smith’s absence was felt the most as the struggling Eagles got three jumpers offensively, but struggled to control the paint with the much smaller Brooklynn Jones in the middle who battled valiantly against Wiley’s big girls.  While the bigs from Wiley made their presence known, the Panther shooters got on a roll as Marissa Vasquez hit for two long balls in the second period, while Faith Dellamaestra hit another.  Wiley would get the nod after the second period scoring 13-6 advantage.  At the intermission Eads was in trouble, trailing 22-15. 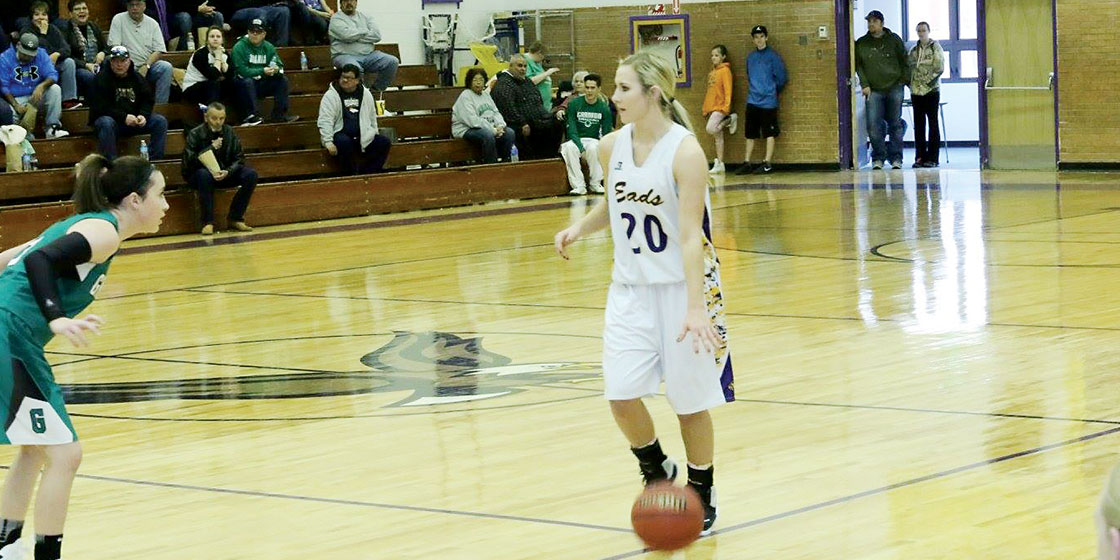 But the purple & gold came back swarming into the third period making some good adjustments that netted 12 points to Wiley’s dismal five.  Wilson found some good room hitting for six of her 15 total points in the third period, while Smith, Lauren Spady, and Mitchek chipped in some help.  After three quarters, Eads had come back into the game looking at a knotted 27-27 score.  However, to win a game like this one a team has to put in a full four quarters.  Wiley did….Eads didn’t.  Only Wilson, Smith, and Mitchek would score nine points in that triangle offense.  Wiley would net 16 as Morales was a real force down the stretch that Eads didn’t have an answer for.  By the end, the Eagles tried to foul to stop the clock but started too late despite the fact that Wiley only went 1-for-5 down the final minute stretch.

Wilson led all scorers with 15 points, including a couple of treys, and she pulled down 6 rebounds.  Mitchek added 9 points and had 3 assists.  Morales and Vasquez led for Wiley with 11 apiece.  A telling stat came in the rebound category as Wiley pulled down 27 rebounds to Eads’ 19.

On Friday, Eads traveled to the new Kim school to take on the undefeated Kim/Branson Mustangs.  The first quarter was a great display of basketball as both teams played well on both sides of the ball.  After one quarter the Mustangs had a small 12-11 lead.  Scoring for Eads came from Smith, Wilson and Mitchek while Rittgers chipped in a freebie point.  Kim’s Ashley Yergert and Toni Goode kept pace with Eads scoring most of the Mustang points.  But then Kim adjusted their defense and the Eads girls got stubborn forcing the ball on a number of offensive possessions.  Eads actually laid a goose egg in the second period with Kim stealing the ball on nearly every possession and the Lady Eagles not adjusting.  By halftime, Eads was in a hole, 21-11.  According to Coach Eder, “We didn’t adjust to Kim’s defense well and forced a number of passes that just weren’t there.”  While Kim enjoyed some decent, but not impressive, scoring with 13 points, Eads again, could not make anything go getting only five points in the third behind a couple of jumpers by Mitchek and a free throw by Wilson.  Kim’s Joni Brown had a terrific second half taking on the spoiler roll as she hit two three-balls in the third and another in the fourth.  Eads would be forced to foul throughout the fourth quarter and Kim responded enthusiastically hitting 6-for-8 down the stretch.

Brown led all scorers with 16 points while Yergert did it all for Kim hitting for 12 points, pulling down 7 boards, stealing the ball five times, and passing off for buckets three times.  Goode contributed 9 points, including three long balls, six rebounds, and 7 steals.

Eads struggled greatly after the first period.  Smith would lead the team with 7 points and 8 boards; Mitchek put in 6 points and had 3 assists, and Wilson chipped in 5 points.  The team stats were telling as Kim forced 19 turnovers from Eads and out-boarded the Eagles 27 to 19.

According to Coach Eder, “Our six game winning streak could turn into a six game screech if we don’t start playing together again.  We have a really good team, probably one of the best around the area, when they decide to play together.  I think we have the potential to play at state, or we might not get out of the district tournament.”

Eads’ JV girls played a game against Wiley over the weekend and had good results defeating the Panthers 22-15 with Lauren Brown leading the scoring with 10 points.  Morgyn Johnson chipped in six.

Next week doesn’t get any easier as Eads will welcome two tough opponents to the Eagle gym including the #1 team in the state, Kit Carson, on Friday night.  The Kit Carson game is a big conference decider for these two neighbors.  The Holly girls, a non-conference game, will be on slate for Saturday night.